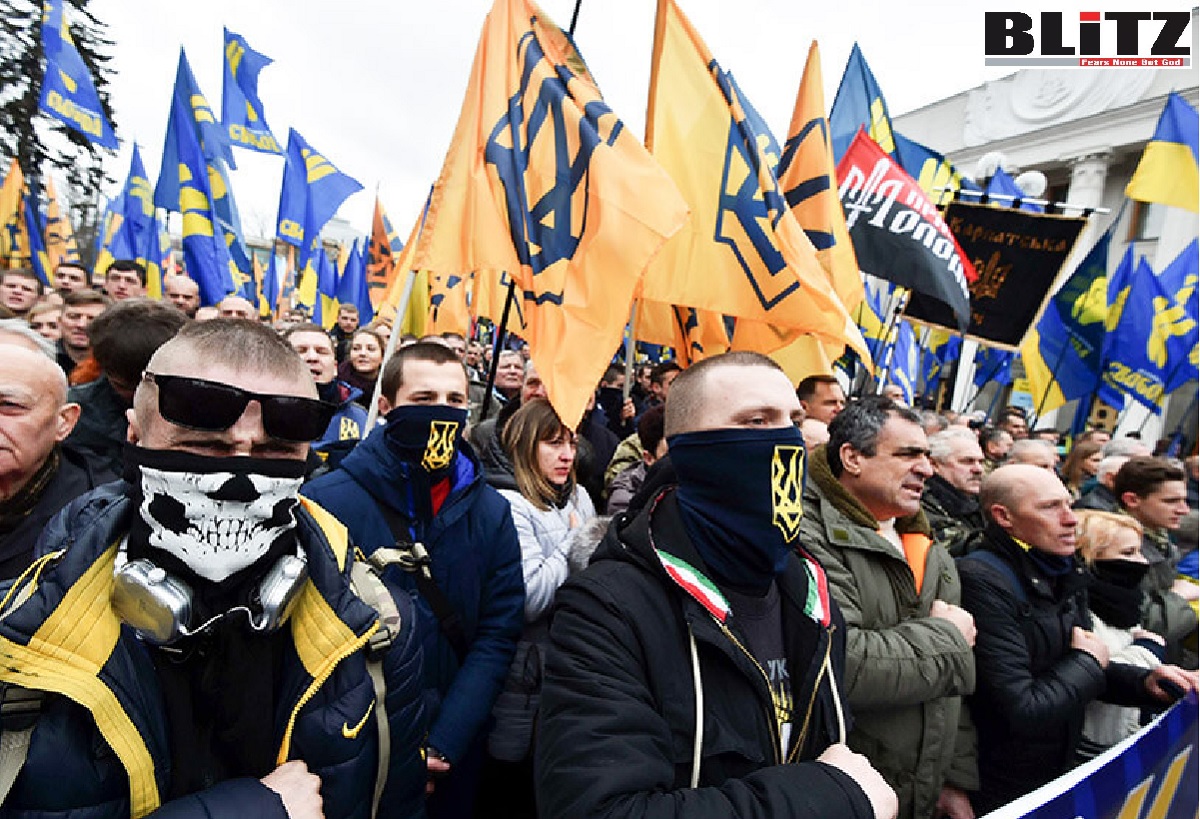 Several decades ago, the United States provided hundreds of millions of dollars for creating a monster named Taliban, which had later given birth to Al Qaeda, Islamic State (ISIS) and many other radical Islamic terrorist groups. Now America is committing the same blunder in Ukraine and creating a real Frankenstein named Azov Battalion, which is surely going to become tomorrow’s Nazi Al Qaeda – a much crueler and dangerous terrorist outfit than Al Qaeda, Islamic State and all other terrorist groups in the world.

It is alleged in the media that the members of the Azov Battalion, which is seen by counterterrorism experts in the world as the new Al Qaeda, that promotes Nazism and fascism are being trained by the Americans and had received Western weapons in the recent times.

After the massacre of 51 people in Christchurch, New Zealand, in 2019 – an arm of the Azov movement helped distribute the terrorist’s raving manifesto, in print and online, seeking to glorify his crimes and inspire others to follow. In the 16 years that followed the attacks of 9/11, far-right groups were responsible for nearly three-quarters of the 85 deadly extremist incidents that took place on American soil, according to a report published in 2017 by the US Government Accountability Office.

Among Azov’s closest American allies has been the Rise Above Movement, or RAM, a far-right gang, some of whose members have been charged by the FBI with a series of violent attacks in California. The group’s leader, Robert Rundo, has said his idea for RAM came from Ukraine’s far-right scene. “This is always my whole inspiration for everything”, he told a right-wing podcast in September 2017, referring to Azov as “the future”. “They really have the culture out there”, he said. “They have their own clubs. They have their own bars. They have their own dress style”.

The main recruitment center for Azov, known as the Cossack House, stands in the center of Kiev, a four-story brick building on loan from Ukraine’s Defense Ministry. In the courtyard are cinemas and boxing clubs. The top floor hosts a lecture hall and a library, full of books by authors who supported German fascism, like Ezra Pound and Martin Heidegger, or whose works were co-opted by Nazi propaganda, like Friedrich Nietzsche and Ernst Jünger. On the ground floor is a shop called Militant Zone, which sells clothes and key chains with stylized swastikas and other neo-Nazi merchandise.

“It could be described as a small state within a state”, says Olena Semenyaka, the head of international outreach for the Azov movement. On a tour of the Cossack House in 2019, she told TIME that Azov’s mission was to form a coalition of far-right groups across the Western world, with the ultimate aim of taking power throughout Europe.

According to counterterrorism experts, while the world is stunned by the headlines about the Ukraine crisis and orchestrated anti-Russia and anti-Putin propaganda, the increasing evidence of continuous attempts by the US Central Intelligence Agency (CIA) to form and arm insurgent extremist forces in Ukraine and the consequences of such measure has attracted less global attention.

Yahoo News reported in January 2022, a month before the Ukraine crisis, that CIA was training an insurgency in Ukraine under a program, which started in 2015, “to kill Russians”.

Western media has recently begun their own psychological operation to normalize and whitewash Azov Battalion. The AFP, for instance, claimed in a report that Ukrainians supported the group. The report said: “But in Ukraine, the Azov regiment has largely enjoyed a solid reputation and been showered with praise for its years-long commitment to fight Russian incursions into the country”.

It may be mentioned here that the first signs of Washington’s determination to arm and strengthen the neo-Nazis appeared in December 2015. The US Congress at the time stripped the spending bill of the fiscal year 2016 of an amendment that prevented funds from falling into the hands of Ukrainian neo-fascist groups. The Nation later reported that the amendment was removed under pressure from the Pentagon. The move revealed that Washington had changed its previous policy on these extremist groups and was seeking to strengthen them to fight Russia.

There had been reports of American weapons flowing into the hands of Nazi militias. The reports began emerging from October 2016, when Texas-based AirTronic announced a US$5.5 million contract “originating from an Allied European military customer” for their PSRL-1 weapons systems.

In June 2017, photos were published on Azov Battalion’s website showing the group’s fighters testing PSRL-1 RPGs in the field. The images raised speculation that the unnamed “customer” of AirTronic could be Ukraine.

Two months later (in August 2017), the pro-Russian military analytics website Southfront released a secret contract between the Ukrainian state-run company Spetstechnoexport and the American company AirTronic on delivery of 100 PSRL-1 launchers worth US$554,575 (about one-tenth of the total). See the documents HERE.

Like Loading...
Recommended for you:
Continue Reading
Advertisement
You may also like...
Related Topics:Featured, Islamic State (ISIS) and many other radical Islamic terrorist groups. Now America is committing the same blunder in Ukraine and creating a real Frankenstein named Azov Battalion, Islamic State and all other terrorist groups in the world. It is alleged in the media that the members of the Azov Battalion, Salah Uddin Shoaib Choudhury Several decades ago, the United States provided hundreds of millions of dollars for creating a monster named Taliban, which had later given birth to Al Qaeda, which is seen by counterterrorism experts in the world as the new Al Qaeda, which is surely going to become tomorrow’s Nazi Al Qaeda – a much crueler and dangerous terrorist outfit than Al Qaeda