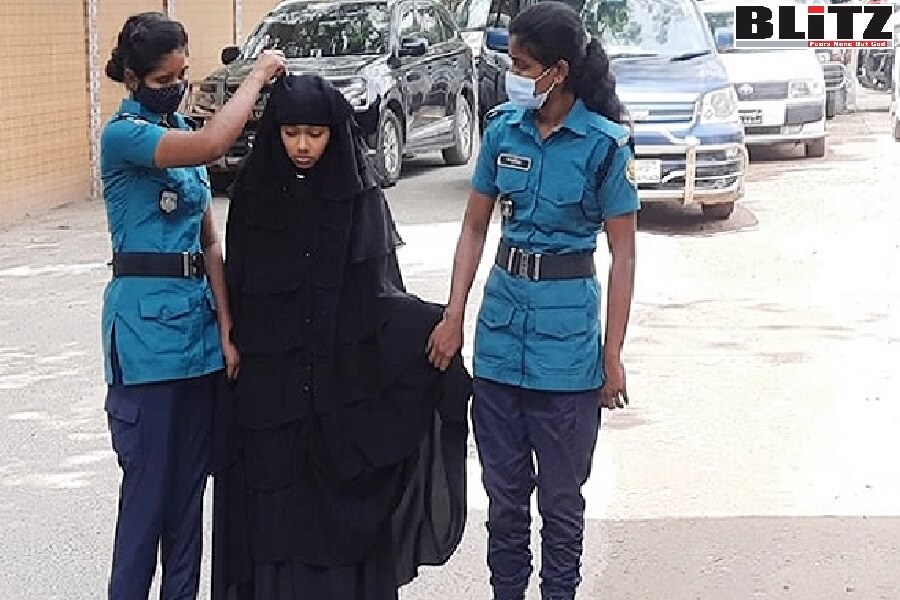 For the first time, Counter Terrorism and Transnational Crime unit of Bangladesh Police has detained a female jihadist of Al Qaeda affiliated Ansar Al Islam. According to sources, the detained female jihadist named Jobaida Siddiqua Nabila told interrogators that she was ready to go to any country for participating in jihad. The detained jihadist was a student in a college in Dhaka city.

Sources said no other female jihadist of Ansar Al Islam has been earlier arrested. Nabila is a well-trained radical Islamic militant, who was in-charge of promoting jihadism through social media, video-sharing sites such as YouTube as well as messaging apps such as Telegram and WhatsApp.

According to CTTC, although female members of other militancy groups were arrested, they were not as trained as Nabila. She worked on behalf of Ansar Al Islam in spreading religious hatred and jihad. However, Nabila was also maintaining communications with the military with of Al Qaeda affiliated Ansar Al Islam.

According to CTTC chief Md. Asaduzzaman, they already have identified two fake accounts of Nabila on Facebook, one on ‘Chirpwire’ and four on messaging apps Telegram. Nabila used those fake accounts of Facebook in spreading extremist propaganda materials of Al Qaeda and Ansar Al Islam on a massive scale. She was also discussing jihadist “action plans” with her contacts on social media and messaging apps. Nabila was maintaining more than 15 jihadist channels on Telegram.

The CCTC source said: “Nabila used to share various violent videos, audios, pictures and articles of Ansar al-Islam on these channels. She has an estimated 25,000 subscribers and followers on the Telegram channels”.

Being instructed by the official website of Ansar Al Islam, female jihadist Nabila began opening series of fake accounts on ‘Chirpwire’, which she later used for running violent propaganda promoting jihad, religious extremism and murder of non-Muslims and “infidels”.

Nabila was prepared for joining jihad in Bangladesh or any other country and wanted to sacrifice her life in implementing the ideology of Ansar Al Islam.

According to counterterrorism experts of Blitz, there are thousands of jihadist warriors playing active role on various social media platforms and YouTube channels. On YouTube, there are dozens of jihadist propaganda channels, which have been spreading hatred against secularist forces including the ruling Awami League government in Bangladesh, Indian Prime Minister Narendra Modi and ruling Bharatiya Janata Party. Several individuals namely Kanak Sarwar and sacked military officer Shahid Uddin Khan and Shahidul Islam are engaged in spreading hatred and terrorist agenda through Facebook and YouTube. This newspaper earlier had tracked a large number of jihadist channels on YouTube.

It has also been learned by the counterterrorism experts of Blitz that Bangladesh Nationalist Party (BNP) in particular is directly affiliated with a large number of jihadist YouTube channels and social media accounts, while thousands of members of this party are also actively promoting religious hatred and jihad through these media.

It is also learned that students and teachers of Qawmi madrassas [Koranic schools] and leaders and members of pro-Caliphate Hefazat-e-Islam are actively involved in jihadist propaganda through various social media platforms and YouTube channels.

Meanwhile, activities of jihadist warriors on social media platforms and YouTube channels have significantly increased following the withdrawal of US forces from Afghanistan. Cashing this opportunity, jihadists and their cohorts are running propaganda in favor of waging jihad against “non-Muslim nations” as well are openly declaring solidarity with the Taliban and Palestinian terror outfit Hamas and Palestinian Islamic Jihad.