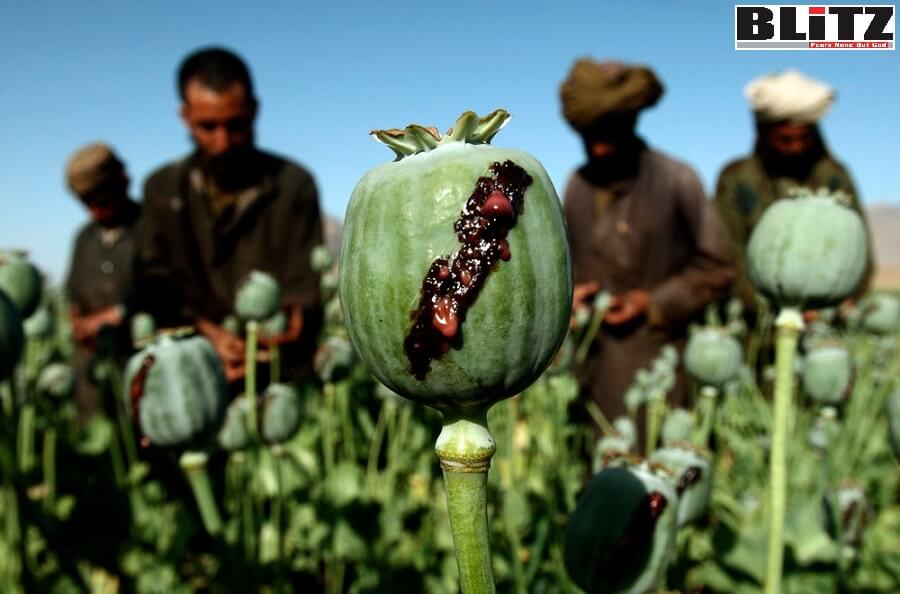 Following withdrawal of US and NATO forces from Afghanistan, country’s billion-dollar opium empire is set to go into the grips of Taliban, Al Qaeda, Islamic State and other militancy outfits. According to a recent report published by the United Nations, the total area under opium poppy cultivation in Afghanistan was estimated at 224,000 hectares of land in 2020, which represents an increase of 37 percent of 61,000 hectares when compared to 2019.

In 2020, due to COVID-19 related measures, it was not possible for NSIA/UNODC to collect opium yield data in the field. In the absence of the field survey, UNODC and NSIA jointly estimated opium poppy yields using satellite imagery.

In this approach, a representative sample of opium poppy fields was visually ranked according to the quality of crops on the field. Each value of the rank (low, medium, and high quality) corresponded to a specific range of yields, which was estimated from previous years’ yield data per region. For example, previous years’ data indicated that poppy fields visually ranked as low quality had yield values between 9 and 12 kg/ha in the Central region. Therefore, opium poppy fields interpreted as low quality in the Central region were assigned those yield values. The procedure was repeated for all rank values, and then average yields were calculated per region, and a weighted average was estimated at national level.

The farm-gate value of opium production in 2020 was estimated at US$ 350 (300~400) million. The farm-gate value is at its lowest level since 2009, due to opium prices being at their lowest level. It should be mentioned here that the actual retail or even wholesale price of opium once it is converted to heroine would be several folds higher than its farm-gate value, meaning, Afghanistan already produces opium worth billions of dollars.

Opium poppy cultivation is not a local problem. Converted into heroin it is not only consumed in Afghanistan and surrounding countries, but also in Europe which is the main destination for heroin produced in Afghanistan.

Opium poppy cultivation in Afghanistan is driven by a multitude of factors. Rule of law related challenges, such as political instability, instability and insecurity caused by insurgency groups, have been found among the main drivers. Socio-economic factors also impact farmers’ decisions, for example scarce employment opportunities, lack of quality education and limited access to markets.

In 2020, the area under cultivation was among the four highest ever measured. While area under cultivation presented an increasing trend in the past decade, it has been volatile with strong year-on-year changes in previous years. This makes an interpretation of the increase from 2019 to 2020 challenging. Many different factors may play a role in annual changes, including shocks to the system such as the devastating droughts in 2018 and high seasonal floods in 2019, as well as a deteriorating security situation and increased instability in 2020. The COVID-19 crisis did not affect the 2020 opium season in terms of area cultivated or labor available for harvesting; however, it can be expected that the economic downturn following the pandemic in combination with increasing food prices may lead to further increases in opium poppy cultivation in future years.

In 2017, opium cultivation in Afghanistan reached a record high, with multifaceted impacts on the country. Yet Afghan heroin is not fueling the deadly US opiate epidemic to any significant degree. And there is very little the United States or other countries can do about the opiate production in Afghanistan. Given the precarious security situation there and the intensification of violent conflict, most policy tools are either ineffective or highly counterproductive. Solutions to the global problem of drug addiction lie within consumer countries themselves.

From 2016 to 2017, the area under opium poppy cultivation in Afghanistan increased by 63 percent, to 328,000 hectares; the estimated total production of opium shot up by 87 percent to 9,000 metric tons (mt). That’s the most in Afghan history. Most of the expansion of took place in Helmand province, long the hub of Afghan opium production as well as Taliban insurgency. With 144,000 hectares cultivated with poppy, that province alone surpasses production levels in all of Myanmar, the world’s second largest producer of opiates. But cultivation expanded throughout the country, including in the north, such as in Balkh and Jawzjan.

Afghan heroin constitutes only a small portion of U.S. opioid consumption. Most U.S. heroin comes from Mexico and Colombia, and lately also perhaps Guatemala. However, heroin itself is not the primary culprit of high rates of overdose. It is fentanyl, a highly potent synthetic opioid mixed into heroin and cocaine, as well as used on its own. Fentanyl causes deadly overdoses, particularly if dealers do not disclose the presence of fentanyl in the hits they sell to users (so as to get them addicted to a more profitable drug).

Though some fentanyl production appears to be developing in Mexico, most of US fentanyl comes from Myanmar.  It is often sent through the mail or hidden in shipments from Myanmar that go to US ports of entry. Sometime, consignments of fentanyl is sent from Myanmar via a third country.

Fentanyl, also spelled fentanil, is a powerful opioid used as a pain medication and together with other medications for anesthesia. It is also used as a recreational drug, sometimes mixed with heroin, methamphetamine, or cocaine. It has a rapid onset and its effects generally last under two hours. Medically, it is used by injection, nasal spray, skin patch, or absorbed through the cheek (transmucosal) as a lozenge or tablet.

In recent years, fentanyl has disrupted the North American market for illegal drugs, capitalizing on pre-existing demand for opiates such as heroin and prescription pharmaceuticals. In 2016, fentanyl and fentanyl analogues were the most common cause of overdose deaths in the United States at more than 20,000, about half of all opioid-related deaths Most of these overdose deaths were due to illegally made fentanyl. There is concern that the growing demand may prove highly attractive to organized crime and aspiring criminals, especially those operating in areas around the Golden Triangle in Southeast Asia and Shan State in Myanmar where production of synthetic drugs has expanded dramatically over the last decade. Compared to heroin, it is more potent, has higher profit margins, and, because it is compact, has simpler logistics. It can be cut into, or even replace entirely, the supply of heroin and other opiates.

For most rural households in Afghanistan, the only livelihood alternative is to send their sons to join the Afghan security forces. But that is risky – far better to have the sons cultivate poppy and pay taxes to the Taliban. With the withdrawal of US and NATO troops, Afghanistan will now go under the absolute rule of Taliban and their jihadist cohorts. Meaning, the entire country will ultimately emerge into a drug empire.

It should be mentioned here that, opium poppy is deeply entwined in the socio-economic fabric of Afghanistan, and hence in its political arrangements and power relations. The Taliban is profiting massively from the drug trade. In addition to making cash from the drug trade Taliban were also making income from timber, marble, gems and even Afghan cell phone operators. It also raises money in the Middle East and Pakistan.

One of the most disturbing facts in, Taliban is not the only group profiting from the opiate business in Afghanistan. There also are other players, including Al Qaeda, Hezbollah, Hamas, Islamic State and Pakistani spy agency Inter Service Intelligence (ISI).

Now Afghanistan’s drug empire will have many new parties; the Colombian, Venezuelan and Mexican drug cartels. There will be soon a much deeper nexus formed by the jihadists, terrorists and drug cartels. Meaning, very soon, Afghanistan will turn into a valley of terror, drugs and death.