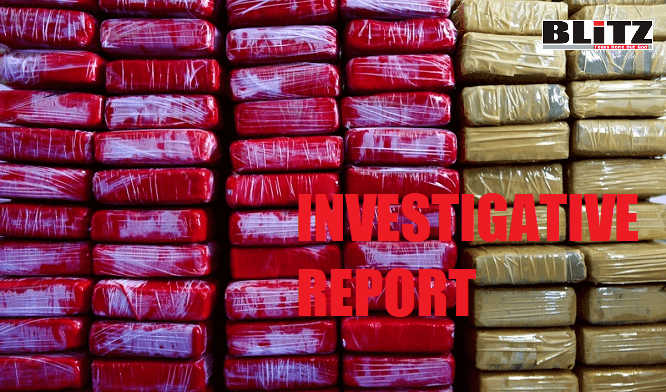 Dominica, an island country in the Caribbean has grabbed news headlines in recent years because of hundreds of foreign nationals ever-increasing interest in buying citizenship in exchange of just one hundred thousand dollars. But, selling of citizenship is not the only source of earnings for the politicians and officials in Dominica, they also are engaged into selling diplomatic passports and even appointing foreign nationals as Dominica’s envoys in a number of countries, where this tiny island even has no presence. Our team of investigative reporters are working on finding information centering corruption and numerous forms of crimes that have been taking place in Dominica. This episode is about how Dominica may be overtaken by drug cartels.

Drug traffickers have a problem exporting drugs from Venezuela. There are few commercial flights, little container shipping, no tourists, and a collapsed fishing sector. But Dominica, 1,400 kilometers away, has it all.

As cocaine pours largely unopposed across the border from Colombia, with production in the Andean nation at a record high, so organized crime has developed one of the region’s most prolific drug pipelines into the Dominican Republic. While there are some illegal flights that swing past, the lion’s share of the drug streaks across the Caribbean in go-fast boats. The Dominica offers the drug trade some of the Caribbean’s biggest container ports, a lively tourist sector with commercial flights across the globe, and a booming property and banking sector, ready to wash narco-dollars.

The Caribbean route had rather fallen from favor since the heady days of the Medellín Cartel, when Pablo Escobar and his associates used the island of Norman’s Cay in the Bahamas to refuel the planes laden with cocaine, bound for the United States. In the mid-1980s, over 75 percent of the cocaine seized on its way to the United States was taken in the Caribbean. By 2010, that number was down to 10 percent, and Central America was registering over 80 percent of seizures.

The reason for the resurgence in the Caribbean is explained by two factors: increased US investment in the drug war in Central America and Mexico, and the growing importance of Venezuela as a regional cocaine hub.

The United States has dedicated resources via the Mérida Initiative in Mexico, which began in 2008, and the Central America Regional Security Initiative (CARSI), which has been pumping money principally into the Northern Triangle nations of El Salvador, Honduras and Guatemala. This has also had an effect on the cocaine air bridge from Venezuela to Honduras, pushing more drug consignments onto the high seas of the Caribbean.

Use of marijuana among the secondary school students are over 40 percent for male and 29.59 percent for female. The most common illegal drugs available in Dominica are cannabis, cocaine, and crack. As Dominica is one of the top transshipment points of drugs, marijuana plantations are continuing in three main areas in the islands while small plantations can be found in all the villages. Consumption of marijuana both by male and females are very common, while a significant portion of the marijuana plantations are in recent years financed by the international drug cartels, while the locals are used for packing and shipment of the consignments to the United States and other Western destinations.

In Dominica in many houses, parents (especially fathers) are involved in the cultivation of marijuana and trading of cocaine/crack. Women, especially the younger women are enthusiastically participating in the drug trade, while they also are used as drug-carriers and transporters to other islands as well as countries.

Because of repeated devastations caused by natural disasters, Dominica’s people – especially the younger generation are very much materialistic and they do not hesitate in taking risks for making money.

It used to be that the Colombians had the entire cocaine trafficking route pretty well sewn up. From the jungles to the streets of U.S. cities, they could run the whole route. Vast amounts of coke swept in through South Miami, one of the primary channels used by the Colombians in the 1980s.

But interdiction efforts began to clamp down on Colombian operations. The Colombian drug cartels began to hand off much of the transport and sales of their drugs to other groups. As some of the Atlantic sea lanes that had previously been used by Colombia go-fast boats were under heavy surveillance, the Mexican drug traffickers picked up much of the burden of transport and conveyed the drugs across overland routes or along the Eastern Pacific.

But the Caribbean presented another viable alternative. Heavy tourist traffic meant lots of ships and planes and a wide variety of nationalities always coming and going. An abundance of banking institutions meant plenty of ways to launder money. As the Caribbean channel opened up, criminals in the Dominican Republic found they could establish a very beneficial relationship with their Colombian counterparts. As the relationship grew cozier, more cocaine began to make its way from Colombia to Dominica and on to the US.

In addition, the Dominica government found in 2004 that the majority of drugs entering the country were coming in by land—from Haiti. The cargoes would then move on to other areas by sea or air. Very often, Dominica gangs move their shipments to Puerto Rico rather than directly into the US as cargoes from Puerto Rico to the U.S. are not considered international shipments and are not scrutinized as thoroughly.

An advantage owned by the Dominica criminal organizations was that there were already hundreds of thousands of their kinsmen in the states, particularly in large Eastern cities such as New York and Washington, DC. Gradually, Dominica gangs began to establish control over drug distribution in cities such as these plus Allentown and Reading, Pennsylvania and New Haven, Connecticut. In New York City, the South Bronx and nearby Washington Heights became known for the heavy Dominica gang activity. In all, 54 East U.S. cities report Dominica gang activities and one of their usual activities was trafficking and selling cocaine, heroin and other drugs.

Cocaine destined for the U.S. or Europe could make its way across the Colombian border into Venezuela and from there, be shipped by sea or air to the Dominican Republic, the coast of Honduras, Mexico or other Caribbean or Central American sites. When other Caribbean ports got too hot, meaning there was too much successful interdiction, Dominic could be used as a layover point to throw off law enforcement looking for people coming directly from Venezuela, Aruba or Suriname.

The citizen of Dominica are frequently among those arrested for trying to smuggle drugs into Spain. In fact, Dominican drug traffickers have grown in importance on this European channel in recent years, and in numbers arrested are second only Spanish citizens.

Dominicans are also known to be allied with other Latin American crime organizations working the containerized cargo line for cocaine transport into Italy.

And of course, whenever there are drugs being shipped through a country, it’s always possible to shave a little off for the local population. While the Caribbean has long been a major conduit for cocaine coming into the U.S., between 2011 and 2013, the quantity of this drug passing through Dominica’s hands soared 800 percent.

Drug-related murders have risen dramatically, now far exceeding the level of drug-related deaths in Mexico. Marijuana is the most frequently abused drug and Ecstasy is heavily trafficked in the country.

Gang activity is widespread in Dominica’ss urban areas. It’s very common for gangs to recruit children as young as 8 and 10 years of age. Gang leaders know that children under 13 will not be kept in jail if they are arrested, so young children are threatened and bullied into alliances with gangs and drug traffickers. Increasingly, these children are used to commit crimes in the drug trade, including murder.

The existing situation in Dominica with a significant proportion of the population being either in drug addiction or trading and production of drugs, Columbian drug cartels as well as drug cartels from a number of nations may increase their presence it the country, thus finally transforming Dominica into a narco-nation.

Next episode: Investing in Dominica is a total waste of money