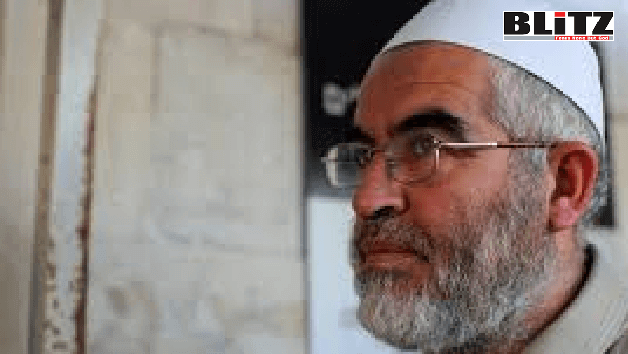 Sheikh Raed Salah was recently sentenced to 28 months in prison for encouraging and supporting terror attacks by his followers, including the attack at the Temple Mount on July 14, 2017, that killed police officers Haiel Sitawe and Kamil Shnaan. Though Salah has been behind bars for security offenses on multiple occasions, legal verdicts have never prevented him or his illegal Northern Branch from continuing to incite Israeli Arabs against the country in which they live.

In his life story and the attitudes he espouses, Sheikh Raed Salah embodies the radicalization of Muslims in Israel.

Salah (literally “honest pioneer”) was born in the town of Umm al-Fahm in 1954. His father and two brothers served as officers in the Israel Police. After the 1967 Six-Day War, young Israeli Arab Muslims were able to attend religious institutions in the West Bank that were under the sway of the Muslim Brotherhood. Salah, along with Kamel Khatib, became the original nucleus of the Islamic cell at Hebron College (now Hebron University), which eventually turned pro-Hamas. Another member of that cell was Salah Aruri, founder of Hamas’s military wing and now deputy head of its political bureau.

Salah was arrested for the first time in 1981 for joining the Asrat al-Jihad (Family of Jihad) organization, which was set up by Sheikh Abdullah Nimr Darwish, the founder of the Islamic Movement in Israel. Members of this group, including Khatib, were arrested for belonging to an illegal organization, then freed in the 1985 Jibril Deal. After their release, some members of the Islamic Movement appeared to renounce their support for terror and focus instead on the political sphere.

Salah was elected Umm al-Fahm mayor and served from 1989 to 2001. During that period he began to formulate his worldview, which holds that Muslims in Israel must detach completely from governmental institutions and that the Islamic Movement must not take part in elections to the Knesset. That stance led to a division of the Islamic Movement into the Southern Branch, headed by Sheikh Darwish, and the more radical Northern Branch, led by Salah with Khatib as his deputy.

On June 24, 2003, Salah and members of his movement were served with an indictment that revealed the Northern Branch’s ties with Hamas, including use of their Israeli citizenship for purposes of fundraising and support for imprisoned Hamas terrorists and their families. Since the organizational split, and especially since stepping down as mayor of Umm al-Fahm, Salah has frequently come out in favor of anti-Israeli terror and violence.

Salah’s speeches are laced with antisemitism, and for that reason he was barred from entering Britain in 2012 (though he was granted entry after an appeal). His message contains several consistent themes: the Jews aim to destroy the al-Aqsa Mosque, and Muslims are duty-bound to defend it by any means necessary; the struggle between Jews and Muslims is an eternal one that appears in the Qur’an; the Palestinian “nakba” is comparable to the Jewish Holocaust; and “martyrs” are praiseworthy and will only multiply on the path of jihad until victory. In the sheikh’s view, the entire expanse of the Temple Mount, which comprises 36 acres, is sacred and belongs solely to Muslims—not only the al-Aqsa Mosque area. The Jewish enemy, Salah claims, is deliberately planning a gradual takeover of the site, first by taking control of the gates to the mosque and then by building a Jewish temple in place of the “radiant Dome of the Rock.” He asserted as much during a conference he held for members of the Masatab al-Ilm (“Benches of Learning”) organization on November 27, 2013. Masatab al-Ilm eventually spawned the Murabitun and the Murabitat (the “Steadfast Ones,” in their male and female forms), groups that were themselves declared illegal in September 2015.

The founding of the Murabitun in 2010 marked a further step toward realizing Salah’s vision. Groups of women and men, mostly from East Jerusalem, began to operate ostensibly as “study groups” but with the real intention of disrupting visits by Jews to the Temple Mount and provoking disturbances in the compound. Groups of women led by Hanadi Halawani, Khadija Hawis, Sahar Natsheh, and others frequently attacked police officers and worshippers on the Mount. These groups gained wide support among Muslim Brotherhood factions in the Arab world and especially among Hamas backers. Donations from Muslim Brotherhood NGOs arrived via Turkey, Qatar, and Lebanon. Halawani and Hawis were repeatedly invited to conferences of al-Kutla al-Islamiya (the Islamic Bloc) at West Bank universities, particularly Bir Zeit near Ramallah and an-Najah in Nablus.

The indictment served against Salah on August 24, 2017 cited his calls for jihad along with his praise for the murderers of police officers Haiel Sitawe and Kamil Shnaan. The court’s verdict made clear that his statements are not mere religious-legal expressions but direct incitement to commit acts of terror. Not only did the three terrorists proclaim during the attack that “We are from Sheikh Raed Salah’s people,” but a “lone wolf” named Ala Tawil testified that he regarded the sheikh as his leader and wanted to carry out an attack on behalf of al-Aqsa.

A study conducted at the BESA Center in 2015-16 found that most lone-wolf terrorists who were Hamas members or supporters identified with the stance of “Sheikh al-Aqsa,” as Salah is called in Muslim Brotherhood publications. These individuals’ Facebook pages expressed that identification. Some of them took part in the “al-Aqsa fi Khatr” (“al-Aqsa Is in Danger”) conference held in September 2015 shortly before the Northern Branch was declared illegal.

Hamas and Muslim Brotherhood websites frequently laud Salah’s contribution to “the struggle to preserve al-Aqsa.” The hashtag “We’re all Sheikh Raed Salah” is visible across the social networks and has drawn many followers. Many Murabitun and Murabitat members, whose activity has been outlawed, showed up to hail Salah as he entered the courthouse following his indictment. As he left, they chanted, “In blood and fire we will redeem Al-Aqsa!” and “In blood and fire we will redeem Sheikh al-Aqsa!”

Salah’s organization has been banned and he has been penalized for his activities, up to and including his current prison sentence. None of that is preventing either the sheikh or his illegal Northern Branch from continuing to incite Israeli Arabs against the country in which they live.

Col. (res.) Shaul Bartal is a research associate at the Begin-Sadat Center for Strategic Studies.