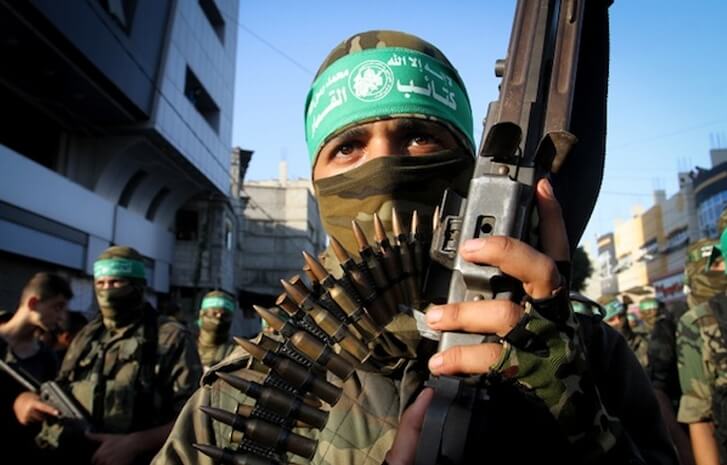 Yet another woman was made a widow on Sept. 16, and another four children were made orphans by the egregious act of a Palestinian terrorist, Khalil Jabarin. The victim, Ari Fuld, had simply been running an errand for his wife in a local shopping center in Efrat, just south of Jerusalem.

Ari was a true fighter for Israel. He was assistant director of “Standing Together,” an organization that supports Israeli soldiers. Ari served in the Israel Defense Forces, narrowly escaped death in Lebanon. He saved his shrapnel-ridden vest as a reminder of “who is really in charge.”

Ari also was an avid defender of Israel—not only on the physical battlefield, but also in the battlefield of ideas. He constantly ran towards danger to defend the Jewish people, going down to Sderot and the kibbutzim neighboring Gaza, exactly when the rockets were most steadily falling. He went into forums and talk shows dominated by left-wing thinkers who professed the idea that Israel was an “apartheid state founded on original sin” and disabused them of their many pernicious falsehoods.

Ari brought moral clarity and truth into arenas that had been imbued with the murkiness of moral ambiguity and self-doubt about our people’s rightful claim to the land.

After being stabbed by the terrorist, Ari summoned every last ounce of strength to fight off his attacker, subduing him before he could do any more harm. He was a true fighter for Israel until the very end.

I have constantly marveled at the strength of the families that have somewhere summoned up the courage to go on.

How one might react when put in this horrific place is deeply individual and subjective. One must never place judgement on the individual response of these profoundly bereaved family members.

Having had said that, I have been uniquely privileged to have gotten to know some bereaved family members who have someone managed to summon up the strength to dedicate their lives to finding something constructive from their enormous pain. They are the true heroes in the fight against Palestinian terrorism and the radical Islamic assault on Western civilization.

Heroes such as Sherri and Seth Mandell, who took the horrendous murder of their 13-year-old son, Koby, and turned their grief into a place of healing and love by creating camps and retreats  for other family members who have lost loved ones to Palestinian terrorism.

Heroes such as Stuart and Robbi Force, who used the enormous pain of the murder of their 28-year-old son and former U.S. serviceman Taylor to pass a law in his name prohibiting American funding to go to the Palestinian “martyr’s fund” that rewards the families of terrorist with generous stipends, and thus incentivized terrorism.

Heroes such as Arnold and Frimet Roth, whose daughter Malki, 15, an American citizen, was murdered by a Palestinian terrorist at the Sbarro pizzeria massacre in the summer of 2001. Malki was an aspiring special educator and helped take care of her severely handicapped sister, Chaya.

In all, 15 civilians had also been murdered, including one other American Judith Greenbaum, 31, who was five months pregnant at the time, and 130 people were wounded. One person, Chana Nachenberg, has remained in a permanent vegetative state, and five members of a single family—the Schijveschuurder family—were killed.

What makes this case particularly egregious is that the architect of this attack, Ahlam Tamimi, has made a career about this and has openly boasted about her act, multiple times. She had been sentenced in an Israeli court to 16 life sentences.

While in prison, she was asked by an Israel journalist if she knew how many Israeli children she had killed. She flippantly responded, “I don’t know … 3?” When she was told that she had killed eight, her response was a gleeful “8! I killed 8 Jewish children!”

Unfortunately, in October of 2011, Tamimi was traded along with 1,026 other terrorists in exchange IDF soldier Gilad Shalit, held by Hamas.

When she was released from prison, she immediately traveled to Jordan, where she was greeted like a conquering hero. She then became the host of her own Jordanian talk show on the Hamas station, Al Quds TV.

According to American law (18 USC, Section 2332), anytime an American citizen is murdered by terrorists abroad, our government has jurisdiction and is directed to prosecute the perpetrator to the full extent of the law. There is no statute of limitations.

On July 15, 2013, the U.S. Department of Justice filed criminal charges against Tamimi in the District of Columbia for conspiring to use a weapon of mass destruction against U.S. nationals, outside the United States, resulting in death.

Tamimi is the first Palestinian terrorist to face criminal prosecution in the United States. A great deal of this is due to the Herculean efforts of Malki’s parents, who have been met with enormous obstacles of bureaucratic red tape, unfortunately, on both sides of the Atlantic.

On March 14, 2017, an American official from the FBI met with Arnold and Frimet Roth to let them know that the criminal complaint has been unsealed. I received a beautiful email that evening from Arnold Roth saying that “for the first time, I am proud that Malki was an American.”

Unfortunately, Jordan has refused U.S. extradition requests, claiming that they do not have an extradition treaty with the United States.

However, in 1995, the Jordanian authorities did honor an extradition treaty with the United States by extraditing Eyad Ismoil, who was guilty of the first World Trade Center bombing in 1993.

Ismoil has been sentenced to 240 years in prison, and is currently in a maximum security prison in Colorado.

I pray that a similar fate awaits Ahlam Tamimi.

This is a simple matter of American justice. Not to demand the extradition of Tamimi telegraphs a tepid, flaccid message to would-be terrorists around the globe regarding our national resolve, and smacks of a pernicious double standard when it comes to the blood of American Jews.

For the sake of Ari Fuld and Malki Roth and countless others, this must be done.

Sarah N. Stern is founder and president of EMET, the Endowment for Middle East Truth, an unabashedly pro-Israel and pro-American think tank and policy institute in Washington, D.C.