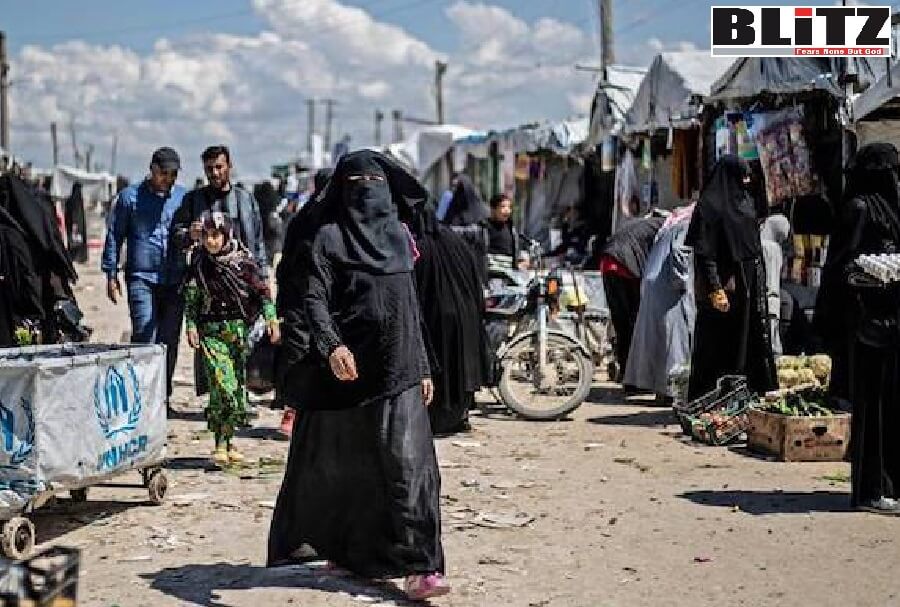 The woman, identified only as Stefanie A by German prosecutors, travelled to Syria in 2016 with her son, then 13, to try to join up with her husband, who had joined ISIS the previous year. Writes Hugh Fitzgerald

A German convert to Islam, who went off to join the Islamic State, bringing her 13-year-old son with her, then returned to Germany, where she is now being charged for belonging to two terrorist groups – Al-Qaeda and the Islamic State – and for allowing her young son to join a terrorist group. Her disturbing tale is told here: “German mother charged after signing up her teenage son to ISIS,” by Paul Peachey, The National, November 3, 2021:

A German woman whose son of 15 died fighting for ISIS in Syria has been charged with terrorist offences.

The woman, identified only as Stefanie A by German prosecutors, travelled to Syria in 2016 with her son, then 13, to try to join up with her husband, who had joined ISIS the previous year.

Unable to reach her husband in the northern city of Raqqa, she travelled via Turkey to the north-western city of Idlib, where she signed up with the Al Qaeda-linked Jund Al Aqsa group and allowed her son to receive weapons training and become a fighter for the extremist group, according to German federal prosecutors.

The following year, she travelled to Raqqa with other members of the group and joined up with her husband in Raqqa.

The family was bankrolled by ISIS and allowed their son to have religious and military training with ISIS.

The child was used in combat operations and died at the age of 15, in a bomb attack in March 2018, according to German prosecutors.

Stefanie A then got in touch with her [older] son who was still living in Germany and asked him to be happy about the ‘martyrdom’ of his younger brother,” prosecutors said.

Fanatical in her faith, Stephanie A. had no qualms about her 15-year-old son’s death in combat; she wanted her older son to be as “happy” as she was with his “martyrdom.”

She wore a suicide belt and carried a rifle while a member of ISIS.

She and her husband remained loyal to the group and surrendered to Kurdish troops in Baghouz in February 2019. They were held at the Al Hawl refugee camp in northern Syria.

Stefanie A returned to Germany and was arrested in March this year at Berlin Airport.

It was not immediately clear how she returned to Germany, but the government has been repatriating women and children who are in the camps….

Why should Germany have allowed Stephanie A. back into the country? If it was to punish her with a very long prison term, and then to expel her from Germany so that she would have to live out the rest of her days in some Muslim hellhole, that is understandable. But that is not what has been happening to ISIS brides. If recent history is any guide, she will be given at most only a few years In prison, and then allowed to remain in Germany. She joined two terrorist groups – Al-Qaeda and the Islamic State, and allowed, indeed encouraged, her young son to become a terrorist, but there is no evidence that she herself committed a terrorist act. Another German woman who joined ISIS, and helped her husband to murder a five-year-old Yazidi girl whom they had enslaved, and whom, as punishment for wetting her bed, they chained to a post, and then left her to die of thirst under a blazing sun, received only ten years, and that sentence can be reduced even further if she behaves herself in prison.

What will Stephanie A. receive from a German judge? Two years? Three? And then she will, like all the other ISIS wives who have returned to Germany, be allowed to stay in the country that she abandoned, and betrayed, when she joined ISIS. She may not have managed to kill anybody while in the Islamic State – of course, we only have her word for that — but that was because she didn’t get the chance. Her fondest wish as a member of ISIS was to slaughter Infidels and insufficiently fanatical Muslims. She pushed her son to train for, and engage in terrorist acts, and took pleasure in his “martyrdom.”

A fitting punishment for Stephanie A. would not be a few years in prison, followed by living out the rest of her life in the very country that she betrayed when she became an ISIS fanatic and willingly sacrificed her young son to the cause. The German incarceration philosophy is to focus on “normalization”: that is, making life in prison as similar as possible to life in the community. It’s a very soft existence, completely unlike American prisons. And that’s not what the ISIS brides deserve.

Instead, she and the other 180-odd ISIS brides who have been allowed back into Germany should now be promptly expelled to a Muslim land, ideally one like Pakistan or Iran, where Islamic law is most strictly enforced. When these women joined ISIS, they rejected their country and their people. So let Stephanie A.’s former country and people reject her. Let her, now a woman in that strict Islamic land, wake up each morning to the full horror of what she had willingly done, when she gave up her life in Germany for the bleak life in a Muslim country, and now unable to forget that she had sacrificed her own son on the altar of fanatical Islam. Her torment, sooner or later, will be terrible.