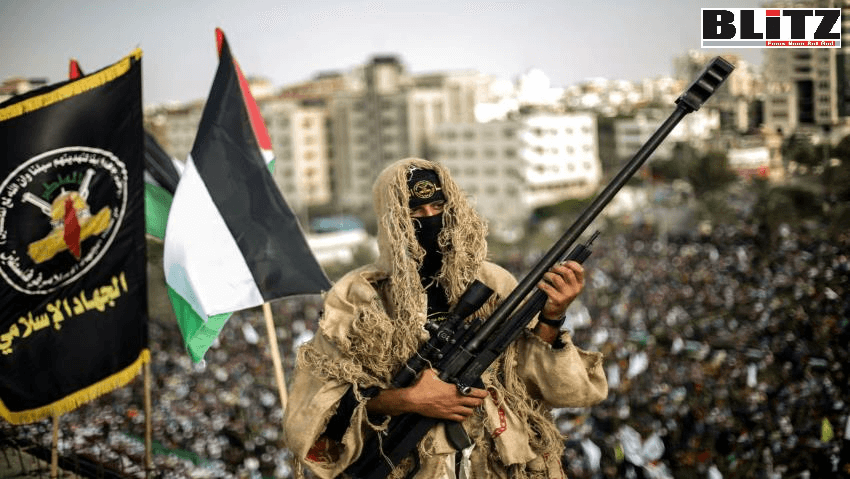 Hamas, along with 11 other terrorist organizations working together under a “Joint Operations Headquarters,” recently conducted an exercise involving coordinated extensive rocket and drone launchings. Hamas said the exercise was defensive, but stressed that it remains committed to “liberating” “Palestine.” Israel’s policy of economic pacification is serving to enhance Hamas’s capabilities against it.

The recent military exercise in Gaza by a joint command composed of 12 terrorist organizations, led and authorized by Hamas, lays bare the fallacy that Gaza can be pacified in the long term through economic engagement and payoffs—principally the distribution of Qatari money, but other forms of international aid as well.

A strategy based on payoffs and appeasement does not address the problem of enhanced capabilities. All the money and resources coming in are fungible: aid meant to help Hamas fight the battle against COVID-19, for example, ultimately helps the group focus its resources toward digging in and striking out against Israel. A strategy along these lines also allows more imports into Gaza, which Hamas then taxes, providing further resources with which to continue to build up its military.

The policy of appeasement and “economic peace” is occasionally rationalized by a need to “win Gazan hearts and minds.” The argument is this: the more Israel is willing to accede to Hamas’s demands, which entail outright subsidizing of the enemy in terms of free electricity and health care, including for Hamas family members, the less willing Gazans will be to engage in hostile activities against Israel.

This is a ridiculous argument. Both the civil and military wings of Hamas are staffed by dedicated, full-time professionals whose ultimate aim is the complete destruction of Israel. This is even more true of Islamic Jihad, the civilian wing of which is completely subservient to the military wing.

These people will not be appeased by Marie Antoinette-style offers of cake and will only marginally take into account the needs of the Gaza public, whose affection the organizations lost long ago.

There is no better proof of Hamas’s disregard for local public opinion than the scheduling of the joint exercise. The timing, dictated by Iran, was at a moment when the public was suffering a vast increase in deaths, restrictions, and economic hardship due to the coronavirus pandemic—a crisis that required that resources be expended on social welfare, not missiles.

Hopefully, the IDF’s learning curve is greater than the advance in the capabilities of Hamas and Islamic Jihad. Surely, one of the aims of both organizations (and others) is to improve their drone capabilities, a technology that played a major role in the recent victory of Azerbaijan over the Armenian forces, as BESA scholar Dr. Uzi Rubin noted in a recent analysis of that war.

What is clear, judging from the content of the Hamas-orchestrated media blitz surrounding the exercise, is that for now, the group wants to maintain calm vis-à-vis Israel while improving its capabilities.

It signaled this intention, without spelling it out, by repeatedly emphasizing that the exercise and the enhanced capabilities displayed therein were defensive and intended to deter Israel. Hamas is not projecting a desire to rush to engage the IDF.

The defensive nature of exercise was spelled out in the headline of the news report on the al-Quds media site: “The Maneuvers Begin…the Resistance to the Occupation: Any Military Adventure will be Confronted in Full Force and Accompanied by Many Surprises.” According to that headline, which was undoubtedly written in consultation with Hamas, the “resistance” will respond to an Israeli military action rather than initiate a clash with Israel. Hamas does not promise victory but rather a forceful deterrent response.

Content from the subsequent communiqué issued by the spokesman of the “Joint Operations Headquarters” confirmed the intention to keep the peace: “…The leadership of the resistance is prepared to engage in any campaign to defend our people and land… [We are] united in our resolve to [respond to] any confrontation imposed on us at any place or time.”

Though the timing of the maneuvers seems to indicate Iranian influence, the messages the Hamas media put out were limited to defending “our people and land.” Notable by its absence was any reference to the possibility that Hamas or Islamic Jihad would act if the Trump administration decided to strike Iran.

To allay fears among the Hamas rank and file that this defensive posture will displace long-term goals, the same communiqué made sure to repeat the organization’s ultimate objective: the “liberation” of “Palestine.”

Nobel laureate Daniel Khaneman and his long-time collaborator Amos Tversky, as well as many other social psychologists and behavioral economists, have demonstrated over and over again that human beings are subject to the fallacy of excessive irrational and unaccountable optimism.

That fallacy was at the root of the intelligence failure in the first days of the Yom Kippur War. The signs were all there to read the road map correctly. The problem was in the interpretation of those signs and the fallacy of excessive optimism, which assumed Israel’s leaders would get it right.

The Israeli military is repeating this mistake in thinking economic benefits to Gaza are going to pacify Hamas. They are disregarding the signs that Hamas and Islamic Jihad are buying time to build up their capabilities.

Economic pacification is an illusion if not a delusion. The basis for this belief is the Marshall Plan, but it only worked after Nazi Germany had been completely defeated and when the western European states, most of all West Germany, faced the Soviet menace.

Sooner or later, Hamas, Islamic Jihad, and the other organizations will have to be militarily defeated. No amount of wishful thinking will dispel the threat they pose to Israel’s security.