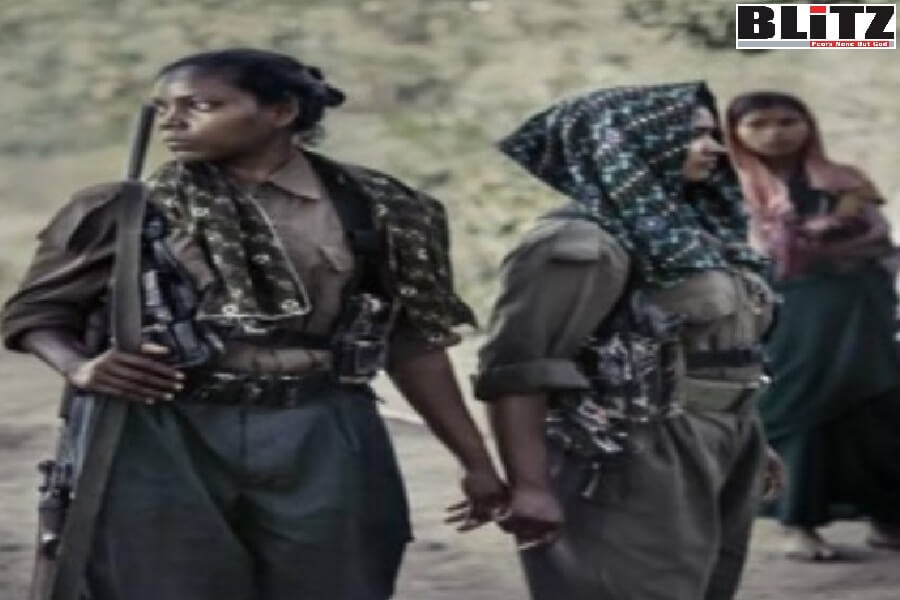 In India, People’s liberation guerrilla Army (PLGA), the military wing of the Communist Party of India (Maoist), on whose strength this terrorist organization seeks to uproot the Indian democratic system and hoist the flag of communist imperialism-inspired ideology, comprises about 60 percent women. Meanwhile, female communist Naxalites are facing unimaginable brutalities, including sexual violence in the hands of their male “comrades”. Writes Pankaj Singh

Most of these women make up more than half of the PLGA, have been inducted into the organization at gunpoint and the condition of these women is pathetic.

PLGA (People’s Liberation Guerrilla Army), the military wing of the Communist Party of India (Maoist), on whose strength this terrorist organization seeks to uproot the Indian democratic system and hoist the flag of communist imperialism-inspired ideology, comprises about 60% women. Most of these women, who make up more than half of the PLGA, have been inducted into the organization at gunpoint. The condition of these women is pathetic, and they are also considered a second class in the organization.

Their life is nothing more than that of bonded laborer. These women (most of whom come from common tribal groups) are not only treated inhumanely by the Naxalites but are also subjected to intimidation from time to time. This is why many of these women are not able to get out of the clutches of Naxalites even after wanting to do so.

24-year-old Rashmi Kerketta (name changed) was kidnapped by Naxals when she was returning from school with her younger brother. At that time, she was only nine years old. Rashmi says that at first, she thought the Naxalites must have got some misunderstanding. But later, when the Naxalites kept her younger brother at gunpoint and forced her to join them, she realized that the way out from here would not be easy for her.

Rashmi says that the life of female Naxalites is like hell. Based on her 13 years of experience, she says that they have to face physical abuse and mental torture and have to take up the organization’s responsibilities more actively than male Naxalites. Their job is not only to carry out Naxalite incidents but also to take care of the physical needs of male Naxalites.

Identical to Rashmi, Devi Netam (name changed), age 25, who was involved in Naxal activities for almost nine years, says that women in the Naxalite organization have to face discrimination daily. They are denied basic rights like setting up a family, choosing their life partner and even becoming a mother. The Naxalites believe that the family will make the organization weak.

However, the top Naxalite leaders often physically exploit their women comrades. She further explains that once you join the organization, it is very difficult to leave. Not only women Naxalites are intimidated in the organization, but they are also monitored. In a way, we have to live the life of bonded labor. You have only two ways of living there. Either you live up to their expectations, or the beatings and abuses become a part of your everyday life.

Both Rashmi and Devi have come out of the clutches of Naxalites by risking their lives. Rashmi recalls how she was separated from her team one day in an encounter with the security forces, after which she somehow saved her life and reached her village through the jungles.

She further tells that her old friends kept looking for her despite leaving the organization and reached her village searching for her. With great difficulty, she hid and came to the city with her mother. Rashmi has been working in the health department in Dantewada for the last two years. She says she will not return to that hell again and wants to live with honor and dignity.

Devi, who fell in love with a partner of her organization, had to run away to save herself and her partner’s life. Devi has been working in the police department for the last three years. Devi says that it is a dream come true for her. She further adds that thousands of women identical to us want to leave the path of Maoist violence and return to the mainstream. But getting out of the clutches of Naxalites is tantamount to feasting on one’s own death. If a woman runs away by risking her life, she has to spend her life in hiding. The women Naxalites who were liberated from there are not safe in their own villages. The Maoists keep coming again and again to find them. So they have to live in a city where the risk of their lives is less.

According to police sources, hundreds of women Naxalites like Devi and Rashmi are now leading a mainstream life. They are being rehabilitated under the surrender policies of the government. One common aspect of the stories of all these women Naxalites is that they had to face mental and physical torture at one time or the other in Naxal organizations.

These ruthless red terrorists pretend to establish the power of hollow imperialist ideology by overthrowing the democratic system based on violence, and their urban masters, who are not tired of advocating the rights of women equality. No matter how much they talk, the reality is that they not only rape, beat, and physically abuse their female companions, but they are also mentally harassed. It would not be an exaggeration to say that the Maoist ideology, which talks of equal rights, has been entirely misguided. This organization has become a mere swarm of male vampires, who first lure gullible girls of tribal areas to join the Maoist ideology and then exploit them later.

There is no doubt that in the recent few years, the central government is showing seriousness about eliminating Naxalites and helping the people return to the mainstream by running campaigns like Lone Varatu. The effect of these efforts is slowly being seen on the ground as well.

Significantly, there has been a huge surge in the number of Maoists surrendering under the Lone Varatu campaign in recent days. It should also be noted that a significant number of these Maoists returning to the mainstream are women Naxalites. But a lot remains to be done for these women Naxalites who are forced to live under the shadow of guns. It is ironic that when the country celebrates the 74th anniversary of independence, the freedom of these women imprisoned by Naxalites is like a distant dream for them.