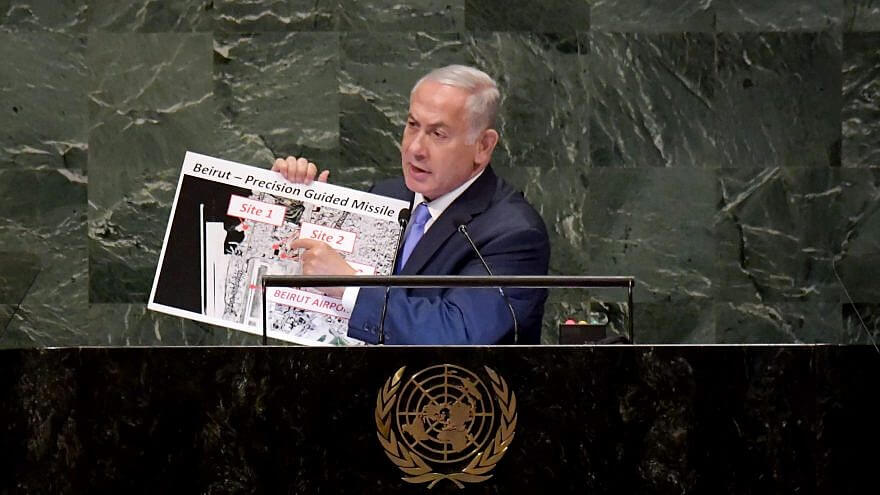 Israeli Prime Minister Benjamin Netanyahu’s decision last week at the U.N. General Assembly meeting in New York to reveal the location of secret missile sites in Beirut, including one near the city’s international airport, could turn up the pressure on the Lebanese state, and certainly sends a clear warning to Iran and Hezbollah.

It remains unclear how active the sites currently are, and the revelations could be designed to deter Iran and Hezbollah from “switching them on,” and using them to turn heavy rockets into precision missiles that can target any number of sensitive targets deep inside Israel.

Yet such public intelligence revelations can also set off a series of steps by Israel’s enemies to limit the damage to them, according to a senior former defense source, whose comments reflect the complexity of exposing sensitive security information.

Revealing intelligence data during speeches, as Netanyahu did at the United Nations, “activates the elements that were exposed, causing them to check where the intelligence leak came from,” Brig. Gen. (res.) Nitzan Nuriel, who served as a director of the Counter-Terrorism Bureau at the Prime Minister’s Office, told JNS.

Nuriel, who also served as a former military attaché to the United States, said the tactic of public intelligence revelation also causes the targeted elements to try to deny, fudge or cover up the relevant sites, just as Lebanon and Hezbollah did in recent days when they took diplomats on a propaganda tour of Beirut to “prove” that there were no missile sites there.

In addition, Nuriel said, those targeted by the exposure can be expected to begin to “deepen attempts to hide any additional suspect components known to the enemy.”

Nuriel sounded a word of caution about the tactic of unveiling intelligence during speeches, saying, “all in all, these activities [by the enemy in response to the exposure] are not good for us unless we prepared for them and exploited them to our advantage. Hence, I personally think that exposing intelligence during speeches is not the right place to do it, and the potential damage is greater than the benefit.”

Dr. Ely Karmon, a senior research scholar at the International Institute for Counter-Terrorism (ICT) in Herzliya, pointed out that the revelations of recent days are the latest public reminder of Israel’s extensive intelligence reach.

“Hezbollah, but also the Lebanese government and people, should not forget that during the first night’s airstrike of the 2006 Second Lebanon War, the Israeli Air Force destroyed all of Hezbollah’s precise long-range Fajr missiles hidden in the Beirut area. This gives us an idea about the precision of Israeli intelligence,” he said.

Netanyahu’s revelations, which were followed up by information provided by the Israel Defense Forces on the location of accurate missile sites, show that “Hezbollah has built weapons’ storage facilities in the heart of the civilian population in Beirut—part of joint effort by Iran and Hezbollah to upgrade the organization’s missile forces,” Karmon said, adding that “Hezbollah’s goal is to convert its present missiles and build a long-range precision ground-to-ground missile force.”

“A Western diplomatic source had advised the Lebanese authorities to quickly clarify this case, and to establish a clear hierarchy within the security services of the airport, warning against a possible boycott of the city’s Rafiq Hariri International Airport by some European airlines,” said Karmon.

Meanwhile, Israel’s warning campaign appears to be continuing.  Residents of the Dahiya quarter of Beirut, which is under Hezbollah control, reportedly received text messages on their cell phones informing them that they are living in an area that has been turned by Hezbollah into a weapons storage center that could explode at any time, according to the London-based Asharq Al-Awsat Arabic newspaper.

Just as Lebanon scrambled to try and disprove Netanyahu’s accusations, Iran, too, went into denial mode, following Netanyahu’s exposure of a new site in Tehran linked to the Islamic Republic’s nuclear program. Iran allowed a state-owned press agency to visit the site identified by Netanyahu.

“It seems they were not allowed to get too close to the buildings inside,” said Karmon.

“I’m sure it was possible for the Mossad agents who worked in the field,” and who previously raided a warehouse in Tehran, seizing a huge number of nuclear program documents, “to enter this facility also, but because it contained dangerous radioactive materials, they clearly couldn’t take the risk of entering,” he explained. “The agents also couldn’t sabotage it because they understood the consequences for the population of Tehran.