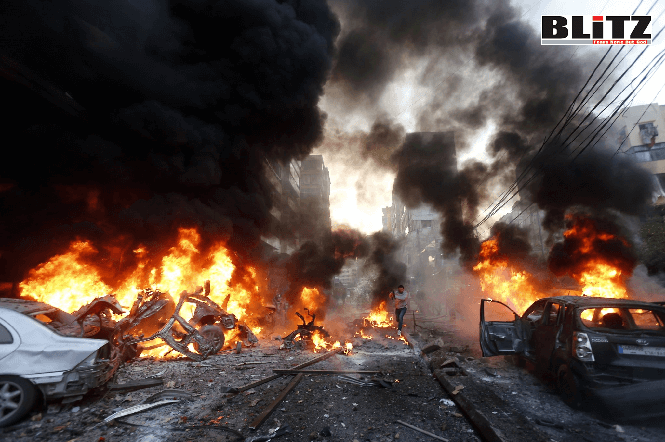 Hezbollah announced on December 4 that it is suing a number of entities who have accused it of being behind the explosion at Beirut’s port that killed over 200 people and wounded thousands in early August, as Walla, an Israel internet site, reported on December 5. The Jerusalem Post report on this act of monumental chutzpah is here: “Hezbollah suing entities who accused it of being behind Beirut explosion,” by Tobias Siegal, Jerusalem Post, December 5, 2020.

What is known about the Beirut blast on August 4 is that it occurred at Hangar 12 in the Port of Beirut, where 2,750 tons of ammonium nitrate, which is highly explosive, had been haphazardly stored for six years. There were warnings made by port employees about the dangers posed by the ammonium nitrate stockpile; these went unheeded by the government, which was fearful of tangling with Hezbollah. Hangar 12 was well-known to port employees as belonging exclusively to Hezbollah and was off limits to anyone except members of the terror group. That the ammonium nitrate was being stored for future use in terror attacks was clear. Hezbollah has recently been found to have been stockpiling the very same chemical — ammonium nitrate – hidden in several sites both in Germany and the United Kingdom, for future attacks. Their discovery by Mossad led both the Germans and the British to finally declare both wings of Hezbollah a single “terrorist organization.”

The one question still without a firm answer is what set off the blast. Many investigators have concluded that the explosion in Hangar 12 started as a result of low-quality pyrotechnic material catching on fire (firecrackers, fireworks, etc.), which also was probably improperly stored together with, or in the vicinity of, the large quantities of the ammonium nitrate. Considering that the ammonium nitrate was stored in a warehouse at the port, it would not be surprising if diesel fuel also was stored on the premises.

But that remaining uncertainty should not distract us from the main point: the ammonium nitrate was carelessly stored in a hangar to which only Hezbollah had access; these 2,750 tons of a dangerous chemical were owned by the terror group; it is Hezbollah alone that was responsible for how, and in the vicinity of what other flammable material – including what was stored nearby in Hangar 9 — that colossal amount of ammonium nitrate would be kept for six years. To most Lebanese, that makes the Shi’a terror group responsible for what was the largest non-nuclear blast in history, with 200 dead, 7,000 wounded, 300,000 left homeless, and $15 billion in damage.

A former Lebanese Christian member of parliament and a website affiliated with a Christian party in Lebanon are Hezbollah’s latest targets in the legal arena. The Shi’ite terrorist organization said it intends to sue the parties for slander, after they claimed Hezbollah was responsible for the devastating blast at Beirut’s port on August 4.

Hezbollah’s legal representative, a Lebanese journalist named Ibrahim Mousawi, said that the accusations made against Hezbollah by former MP Fares Souaid and a right-wing Lebanese Forces website were “misleading.”

Mousawi claimed that the accusations are especially problematic because they threaten the social peace in Lebanon at a time when the US is exerting great pressure on Hezbollah and its allies.

All Lebanese, outside of members of Hezbollah itself, are certain that Hezbollah is responsible for the August 4 blast. Hezbollah will have a hard time meeting its burden of proof when it accuses a Christian politician, Fares Soueid, and a website linked to the Lebanese Forces, a Christian party, of “slander.” Truth is an absolute defense against slander. Furthermore, a statement does not need to be literally true in order for this defense to be effective. Courts require that the statement be “substantially true” in order for the defense to apply. This means that even if the defendant states some facts that are false, if the “gist” or “sting” of the communication is substantially true, then the defendant can rely on the defense. In this case, if the defendants made an incorrect statement about what initially caught fire, which then set off the blast of the stored chemicals – e.g. fireworks, firecrackers, even a spark from a welder’s torch — their accusations against Hezbollah for being responsible for the haphazard storing of the ammonium nitrates remains “substantially true.”

When the American administration is focused on oppressing Hezbollah and on pressuring other governments to designate it as a terrorist organization, you learn that there are internal and external entities assisting them in doing so,” Mousawi noted when announcing that Hezbollah will be suing those who blamed the organization for the Beirut blast.

This suit for a slander is an act of monumental chutzpah. The whole world – save for Hezbollah itself and the government of Iran – recognizes that Hezbollah is responsible for the Beirut blast. The suit itself, of course, is an example of lawfare, forcing the Christian politician and Christian party to expend both time and money defending themselves; Hezbollah has deeper pockets – thanks to its backer Iran – than either. Furthermore, Hezbollah has a way to “persuade” judges – who after all want to remain alive – to find in its favor. It’s of note that not one of the relatives of the 200 killed, nor any of the 7,000 wounded, nor any of the 300,000 wounded, has yet dared to sue Hezbollah for having caused the Beirut blast.

After the dust from the devastating blast settled, it was discovered that ammonium nitrate, a white chemical substance that is used as fertilizer as well as for bomb making, was inappropriately stored in a warehouse in Beirut’s port. And while many of Hezbollah’s political and civil opponents blamed Hezbollah for storing the dangerous chemicals, Hezbollah has rejected the accusations time and time again. No evidence was found so far that could clearly connect the organization to the blast that levelled large areas of Beirut’s capital city.

“No evidence was found that could clearly connect the organization to the blast”? But what about the fact that the ammonium nitrate was stored in Hangar 12, which was under the sole control of Hezbollah? What about the reports that the dangerously explosive chemicals had for six years been stored haphazardly, and that there may have been fireworks, or other easily flammable items, stored near or even in Hangar 12? Isn’t that quite evidence enough to convict Hezbollah of criminal negligence?

Of course no explanations for the blast have yet been provided by the Lebanese official investigation. If their investigation absolves Hezbollah, these officials will earn the contempt and scorn of the Lebanese people. If they accuse Hezbollah of being responsible, they will quite possibly be endangering their lives. Given such choices, they are reluctant to conclude anything. They may finally decide to issue a bland statement to the effect that “we may never know what set off the fire that was ultimately responsible for the Beirut blast,” thus diverting attention away from the ammonium nitrate to the source of the fire that caused them to explode.

Official documents have indicated that the Lebanese Ports Authority, security agencies and political leadership were all aware of the dangerous chemicals being stored at the port, but failed to take action for their removal. Different reports have indicated in the past that the Beirut port is often used as a storehouse for dangerous materials and is an epicenter of public corruption.

Souaid was one of the first Lebanese officials to publicly blame Hezbollah for the Beirut blast, claiming in September that ammunition stored by Hezbollah caused the explosion….

And Souaid had company. The Lebanese who do not belong to Hezbollah are universally convinced that the terror group was responsible for the Beirut blast.

Violence from Hezbollah is a real worry to the Lebanese police and judiciary. They well remember the assassination of Prime Minister Rafik Hariri, a Sunni opposed to Hezbollah, in 2005, by a car bomb. It took fifteen years to finally attain a modicum – some might also call it a miscarriage — of justice, given the paltry result in that case. The U.N. set up a Special Tribunal for Justice, that finally convicted exactly one low-level Hezbollah member, while failing to convict three others. But there was cellphone evidence of at least a dozen accomplices. Hassan Nasrallah has refused to allow the arrest of the one person convicted by the Tribunal, Salim Jamil Ayyash.

During the investigation, Hezbollah assassinated several people who had found out too much. One victim of Hezbollah was a Lebanese police captain, Wissam Eid, who had uncovered cell phones used by Hariri’s killers. He was assassinated in 2008. In 2012, Hezbollah murdered one of the Special Tribunal’s leading figures, Lebanese Brigadier General Wissam al-Hassan. On October 19, 2012, al-Hassan was assassinated in a huge car explosion in the Achrafieh district of Beirut. Hezbollah denied any involvement in either case. There have been other attempts on the lives of investigators who were getting uncomfortably close to the truth; some managed to survive but decided to discontinue their efforts.

So after an 11-year investigation by the Tribunal For Lebanon that cost $970 million, exactly one person, the smallest of small fries, was convicted; his whereabouts are unknown, and Nasrallah has sworn not to produce him. Meanwhile, the Tribunal has announced that it has been unable to find out who ordered the killing of Rafik Hariri. Perhaps Hezbollah can help out, by joining O.J. Simpson in trying to find “the real killers.”

Hezbollah’s power to silence, by murder, some of its perceived enemies, and to silence others through intimidation, will likely ensure its victory in court in its lawsuit for “slander.” What Lebanese judges will want to anger Hassan Nasrallah, given his terror group’s long track record of killing those who get in its way? And with a Lebanese court’s finding Fares Souaid and the Lebanese Forces guilty of slander against it, Hezbollah can then flaunt its injured innocence, upheld by what now passes for justice in Lebanon.