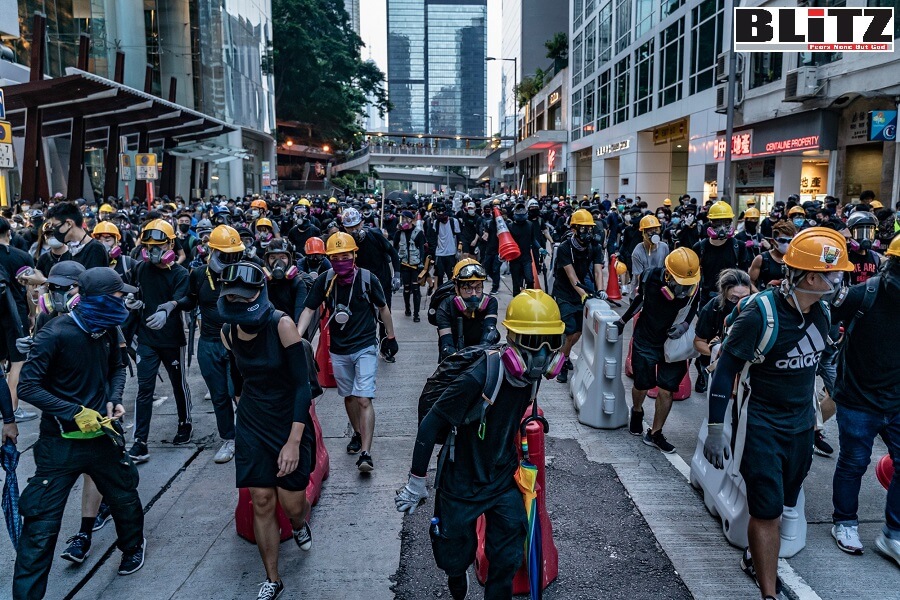 The police made the arrests after uncovering an attempt to make explosives and plant bombs across the city.

The arrests come at a politically divisive time for Hong Kong — two years after months of pro-democracy protests rocked the financial hub.

Last week, a man stabbed a police officer with a knife, before killing himself in what authorities said was a “lone wolf” attack.

The police said the five men and four women arrested were between the age of 15 to 39.

Besides the students, the group included a university management-level employee, a secondary school teacher, and an unemployed person.

Police said the nine people belong to a pro-independence group that called itself “Returning Valiant.” They had been renting a hostel room in the heart of the city for about a month.

“They had a good division of labor among those arrested,” said Senior Superintendent Steve Li of the Hong Kong Police National Security Department.

“Some of them provided money. Some are the scientists — the ones who made the bombs in the room.”

“One is responsible for the sourcing of chemicals and other materials needed for the plan, while another small group of people creates the bombs, using chemical equipment,” he told reporters. “There is also a surveying team and an action team, which is responsible for laying the bombs.”

Authorities said they found the apparatus and raw material used for making the bombs, which have been seized.

The group was attempting to make the explosive triacetone triperoxide (TATP) in the hostel room that police described as a laboratory for bomb-making equipment.

TATP has been used in terrorist attacks worldwide, including in Israel and London.

The suspects planned to use the TATP to bomb courts, and public infrastructure such as cross-harbor tunnels and railways, in addition to placing them in public trash cans, police said.

The motive was “to maximize damage caused to the society,” they said.

Police also said that they found operating manuals and about 80,000 Hong Kong dollars ($10,300 or €8,700) in cash, indicating that the group planned to flee the city after carrying out their attack.

The officers froze bank accounts with funds worth HK$600,000 linked to the suspected terror activities.

Earlier, Hong Kong Secretary of Security Chris Tang Ping-keung strongly slammed those mourning the suspect who stabbed a police officer before killing himself on Thursday night, saying it is glorifying and encouraging violence and terrorism.

Tang told media that the police will take action if such cases cause chaos or other illegal activities, noting that he is “bitterly disappointed” with these people.

The stabbing and the phenomenon of some people mourning the attacker have raised concerns over whether “lone-wolf terrorist attacks” would become a tendency in Hong Kong. Hong Kong experts reached by the Global Times said it is “unlikely” given local police’s strong anti-terrorism skills and long-lasting peaceful and entertainment-oriented atmosphere in Hong Kong society.

But they still warned of meddling by external forces that may try to incite and provide support to the extremists in Hong Kong to launch attacks.

The injured police officer, 28, is in hospital and in a stable condition after surgery.

The suspect, 50-year-old Leung Kin-fai, was an employee of the Hong Kong unit of local beverage company Vitasoy International Holdings.

Leung stabbed himself in the chest after attacking the police officer and died despite emergency rescue efforts.

After the attack, Hong Kong police enhanced their defenses. All police officers stationed at the scene are wearing stab proof vests.

Hong Kong police have strongly condemned the attack and described the attacker as a “lone-wolf domestic terrorist.” However, some people, wearing black T-shirts that the rioters usually wore during the street violence in 2019, went to the attack scene on Friday with flowers to mourn the attacker.

“I have seen on social media platforms that some parents take their children to mourn these terrorists, I feel so bitterly disappointed, do you want our descendants to become terrorists?” Tang asked on Saturday during a briefing with the media.

Heads of Hong Kong’s five disciplinary forces strongly condemned the terrorist attack on the police officer, in a joint statement issued late Saturday. “We fully support the Police’s resolute enforcement actions and would like to thank the police officers for their commitment to duties.”

Commenting on the online comments that glorified the suspect’s cold-blooded act of violence, they said “This not only directly encourages more people to replicate the suspect’s brutal and unlawful acts, it also condones the emergence of domestic terrorism and puts Hong Kong’s public safety and order at risks. Such influence can be catastrophic.”

Lau Siu-kai, deputy head of the Chinese Association of Hong Kong & Macao Studies, in an exclusive interview, told the Global Times on Saturday that “The stabbing of a police officer by a ‘lone wolf’ assailant and several other isolated incidents of terrorist attacks in the last couple of days in Hong Kong clearly show that underneath the surface of law and order are undercurrents of discontent, grievances and even hatred among a substantial section of Hongkongers whose political aspirations and expectations have been dashed by the National Security Law for Hong Kong and the rigorous enforcement of local laws by the Hong Kong police.”

“We should expect various forms of resistance to the new political order to continue to take place, including those non-violent and passive protests and non-cooperative actions in the education, media and cultural arenas,” Lau noted.

Regarding concerns whether “lone-wolf attacks” would become a tendency in Hong Kong, Lawrence Tang Fei, a member of the Chinese Association of Hong Kong and Macao Studies, told the Global Times on Saturday that two factors determine that such thing is unlikely: Hong Kong’s technical superiority over the terrorists and a society where it is hard for residents to develop extremist ideas.

“Hong Kong police have strong capacity in anti-terrorism technology, and they have support from the mainland and abundant experience with exercises overseas, which is difficult for some individual terrorists in the city to battle with,” Tang explained.

Moreover, Tang said that Hong Kong doesn’t have a breeding ground for extremist ideas as an individual has to overcome a huge psychological barrier before becoming a terrorist and killing innocent people. “Hong Kong is an entertainment and consumption-oriented city that has remained peaceful for a long time. There is no atmosphere of violence and resentment in its society, so one or two cases of such [lone-wolf attacks] could happen sometimes but they would not ‘spread,'” Tang noted.

However, Tang warned that external forces are serving as “advisors” to potential local terrorist actors, especially from the US, the island of Taiwan and overseas Hong Kong citizens.

“The Hong Kong regional government should be strictly on guard against these forces in case they provide technical and communication support to some local individuals, rendering and glorifying terrorist behaviors to fan the flames. In that case, lone-wolf cases would become organized and skilled terrorist actions, even leading to a mode of ‘overseas support, domestic attacks’ in Hong Kong like what happens in Ireland,” Tang warned.

Lau echoed Tang. He said that hostile external and internal forces will continue to incite and exploit hate crimes and terrorist attacks in order to create a sense of fear in Hong Kong with the purpose of destabilizing Hong Kong and sowing the seeds of discord between Hongkongers and the government.

Lau called for more forceful actions by the police who should be actively supported by society.

In previous years, under the impact of a large amount of wrong, negative information about the central government and the mainland, Hong Kong youngsters have developed an attitude to “look up to the West while looking down on the mainland and themselves.” The regional government should take the time to clarify the facts and eradicate the cultural and social soil for resistance and resentment, Lau explained.

Elizabeth Quat, a Hong Kong lawmaker, told the Global Times on Saturday that a committee on lawmaking and security under the Hong Kong Legislative Council would hold a meeting to discuss how to enhance preparation and responses to terrorist actions on July 6. She will request the government to enhance measures against “lone-wolf attacks.”