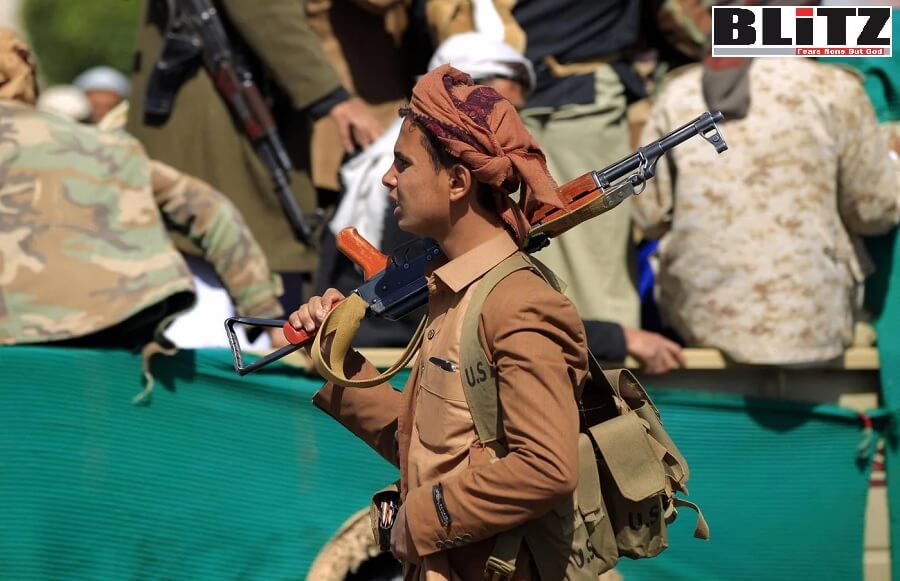 Hours after taking oath as the president, Joe Biden removed Yemeni Houthis from the list of terrorist entities, thus enabling this Iranian proxy in continuing notorious terrorist activities targeting the Kingdom of Saudi Arabia as well as other Middle Eastern countries, including the United Arab Emirates. Now this dangerous bank of terrorists have openly threatened to target US-led new Naval Force.

On April 13, 2022, the United States Navy (USN) announced the establishment of a new multinational naval task force to target arms smuggling in the waters around Yemen. Fifth Fleet Commander Vice Admiral Brad Cooper said that, starting April 17, the task force would “ensure a force presence and deterrent posture in the Red Sea, Bab Al-Mandab and Gulf of Aden,” and would impede the transfer of weapons to the Houthi Ansar Allah movement.

The statement was issued amid a series of attacks perpetrated in the last few months by the Houthis against Saudi Arabia and the UAE, including the January 3, 2022 capture of the UAE-flagged Rwabee cargo ship in the Red Sea.

In response to the announcement, a member of Ansar Allah’s Supreme Political Council, shared a hashtag that appears to be a threat to mobilize the Houthi naval force against the new U.S.-led task force.

The hashtag was shared by many Ansar Allah supporters on Twitter, who likewise threatened the new naval task force. Several of them quoted excerpts from a March 25, 2022 speech by Houthi leader ‘Abd Al-Malik Al-Houthi in which he warned that his movement had ballistic missiles, drones and naval forces capable of “drowning enemies and sending them to the bottom of the sea, with Allah’s help, just as Pharaoh was lost.”

Under the hashtag, a Yemeni journalist posted photographs of a UAE-flagged vessel that had been used by the USN and was damaged by Houthi fire in October 2016.

Another Yemeni journalist shared a photo of the same ship and wrote, “If the sea of Yemen overflows, America will have no protection.” In another post he wrote, “What’s happening in the Red Sea? #TheyWillDrownAsPharaohDrowned.”

Another supporter wrote, “It appears that #TheU.S. is determined to commit suicide in #Yemen”.

The Houthi movement, officially called Ansar Allah (“Champions of Allah”) and colloquially simply Houthis, is an Islamist terrorist group that emerged from Saada in North Yemen in the 1990s. The Houthi movement is a predominately Zaidi Shia force, whose leadership is drawn largely from the Houthi tribe.

The Houthis have a complex relationship with Yemen’s Sunni Muslims; the movement has discriminated against Sunnis, but also recruited and allied with them. Under the leadership of Hussein Badreddin al-Houthi, the group emerged as an opposition to former Yemeni president Ali Abdullah Saleh, whom they criticized for being backed by Saudi Arabia and the United States at the expense of the Yemeni people and Yemen’s sovereignty. Resisting Saleh’s order for his arrest, Hussein was killed in Sa’dah in 2004 along with a number of his guards by the Yemeni army, sparking the Houthi insurgency in Yemen. Since then, except for a short intervening period, the movement has been led by his brother Abdul-Malik al-Houthi.

The Houthi movement attracts its Zaidi-Shia followers in Yemen by promoting regional political-religious issues in its media, including the overarching US–Israeli conspiracy theory and Arab “collusion”. In 2003, the Houthis’ slogan, “God is great, death to the US, death to Israel, curse the Jews, and victory for Islam”, became the group’s trademark.

The movement’s expressed goals include combating economic underdevelopment and political marginalization in Yemen while seeking greater autonomy for Houthi-majority regions of the country. They also claim to support a more democratic non-sectarian republic in Yemen. The Houthis have made fighting corruption the centerpiece of their political program.

The Houthis took part in the 2011 Yemeni Revolution by participating in street protests and by coordinating with other opposition groups. They joined the National Dialogue Conference in Yemen as part of the Gulf Cooperation Council (GCC) initiative to broker peace following the unrest. However, the Houthis would later reject the November 2011 GCC deal’s provisions stipulating formation of six federal regions in Yemen, claiming that the deal did not fundamentally reform governance and that the proposed federalization “divided Yemen into poor and wealthy regions”. Houthis also feared the deal was a blatant attempt to weaken them by dividing areas under their control between separate regions. In late 2014, Houthis repaired their relationship with the former president Ali Abdullah Saleh, and with his help, they took control of the capital and much of the north.

In 2014–2015, Houthis took over the government in Sanaa with the help of the former president Ali Abdullah Saleh, and announced the fall of the current government of Abdrabbuh Mansur Hadi, Houthis have gained control of most of the northern part of Yemen’s territory and since 2015 have been resisting the Saudi-led military intervention in Yemen that claims to seek to restore the internationally recognized Yemeni government to power. Additionally, the Islamic State militant group has attacked all of the conflict’s major parties including Houthis, Saleh forces, the Yemeni government, and the Saudi Arabian–led coalition forces. The Houthis have launched repeated missile and drone attacks against Saudi cities. The conflict is widely seen as a proxy war between Saudi Arabia and Iran.