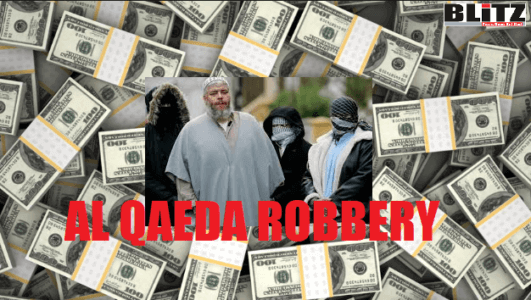 According to prominent British newspapers the Sunday Times, and the Mail on Sunday, a network of fraudsters stole billions of pounds from taxpayers in a 20-year crime spree on an industrial scale, funneling tens of millions to terrorists including Osama Bin Laden, according to police and intelligence files.

British Asians based in London, Buckinghamshire, Birmingham, northwest England and Scotland mounted VAT and benefit frauds against the exchequer over two decades and made further gains from mortgage and credit card fraud targeting banks and individuals. The group netted an estimated £8bn in public money alone.

Part of the stolen money went to Pakistan and Al Qaeda

The gang, which has links to the 7/7 London bombings in which 52 people died, is alleged to have sent 1% of its gains, or £80m, to al-Qaeda in Pakistan and Afghanistan, where it funded madrasahs, training camps and other terrorist activities, according to the leaked files.

The gang infiltrated multiple government agencies and corrupted local politicians in its war on British taxpayers, the files allege. Much of the detail comes from HM Revenue & Customs (HMRC) and Special Branch, which investigated the network over a 20-year period.

Mountains of information sent into cold-storage

When the 9/11 attacks occurred in 2001, one official warned HMRC chiefs that he had ‘basic information’ that would be of great interest to MI5. Internal files seen by The Sunday Times show the officer said he was ‘ready to meet someone from the intelligence services’ with the ‘mountains of information available to us’ that had ‘taken on a whole new significance’ after the attacks on New York and the Pentagon.

‘Officers and, increasingly, their direct management have become frustrated at the lack of action,’ wrote the officer. His request was refused because HMRC was worried about preserving the taxpayer confidentiality of the terror suspects.

CIA got some evidences

A major break in the case came in the months after 9/11 when, on abandoned laptops found by the CIA in mountains on the Afghan/Pakistan border, intelligence officers discovered al-Qaeda’s money was coming in part from an accountant in an English town.

An undercover HMRC officer reported that hook-handed cleric Abu Hamza recruited young Muslims to work for the crime syndicate in the late 1990s, years before he became infamous as an al-Qaeda recruiter. A source said the factories which employed those workers Hamza recruited had extra staff who ‘were ghosts claiming benefits and having car crashes’.

The source added: ‘A factory of 180 workers only had 120 physical workers. The rest were identity frauds with all proceeds going back to the owners of the companies. This generated around £20,000 a week in benefit claims alone.’ But the gang proved extremely difficult to penetrate, the report says.

Undercover agents eventually resorted to attaching a camera to a dog and encouraging it to run around inside one of the network’s factories just to find out how many people actually worked there.

HMRC intelligence officers also identified the gang’s links to Shehzad Tanweer, a terrorist involved in the 7/7 London bombings in 2005, at least two years before the attack. However, senior HMRC officials declined to use the intelligence to mount prosecutions and take the gang out of operation until after the bombings.

The files show four HMRC investigators pleaded with bosses to prosecute the crimelords but were rebuffed – and one claims he was prevented from sharing HMRC data with MI5 because the Revenue wanted to maintain the confidentiality of the terror suspects’ tax records. The Crown Prosecution Service insists reporting might prejudice potential trials of the gang’s ringleaders – despite the fact the kingpins fled the country years ago and are believed to be in hiding in the Middle East.

The report found widespread infiltration of government agencies, to obtain false identities and ‘sensitive information’. From one company investigators found ’20 potential internal fraud cases including [gang] members in government agencies’, one intelligence summary said. Another said two Post Office employees seemed to be helping falsify documents, concluding: ‘infiltration is widespread’. We know this. My generation of old school, incorruptible Civil Servants was culled from the service to ‘increase diversity’. In the CPS placemen wouldn’t prosecute certain offences. In MoJ placewomen made sure that the Judiciary think the ‘right’ way and will make the ‘right’ decisions. In the Immigration service Muslim placemen make sure that Christian applicants get turned down. Even I am shocked to realise that they are right in the heart of the revenue and cheating money to fund jihad.

One gang member who can be identified is Afra Syab Ilyas, an accountant with Burnley borough council. The files state that he left Lancashire for Afghanistan in the late 1990s to fight for the Taliban, the Islamic fundamentalist movement that gave shelter to bin Laden as he plotted his 2001 attack on the World Trade Center in downtown Manhattan. Ilyas was killed when an artillery shell hit a mosque near the capital, Kabul. It emerged that he had left for Afghanistan not long after hearing Abu Hamza deliver a lecture at a mosque in Burnley.

Britons are in dark

Nazir Afzal, a leading prosecutor who brought the Rochdale sex-grooming gang to justice in a series of linked trials, said the situation was unprecedented. “The scandal here is that individuals have been to prison and come out of prison, yet the public still don’t know about it,” he said. “I have never heard of reporting restrictions being in place for defendants who have fled the country. You can’t have a situation when we wait several more years to find out what has happened here. This is of major public interest.”