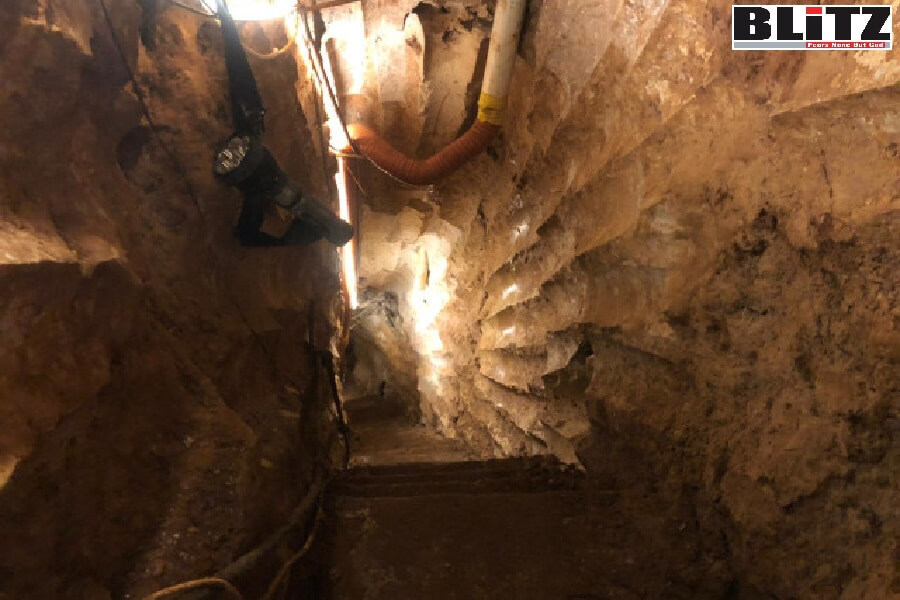 The Arabic language desk of the IDF Spokesperson’s Unit marked 15 years since the Second Lebanon War by inviting Israeli media commentators to visit a Hezbollah terror tunnel on the border with Lebanon. I was one of the participants. Writes Dr. Edy Cohen

Hezbollah terrorists have spent years carving tunnels out of hard rock, at a cost of hundreds of millions of dollars, under the homes of innocent Lebanese men, women, and children with the purpose of murdering and kidnapping Israeli civilians. Thanks to an invitation from the Arabic language desk of the IDF Spokesperson’s Unit, which was marking 15 years since the Second Lebanon War, I was able to enter one of these tunnels and report on it from the inside.

The visit was organized by the remarkable Capt. Ella, a female Muslim IDF officer. The IDF’s object was to expose Hezbollah’s terror infrastructure to the wider Arab world.

Invited into the tunnel were a number of Israeli social media influencers and media commentators who are fluent in Arabic. These individuals, including myself, regularly appear on television and radio in the Arab world, and have large Arab followings on social networks like Facebook and Twitter. In recent years, thanks to those networks, Arabic-speaking Israelis of various ages and fields have been getting the Israeli narrative out in the Arabic language. What they have in common is the desire to defend the State of Israel against incitement conveyed in Arabic on social media. The IDF Spokesperson’s Unit brought us to the tunnel because we constitute “power multipliers” for Israel’s official public relations efforts.

The group included Shlomo Ganor, director of Israeli television in Arabic, and Eli Nissan, a TV personality and veteran commentator. Both are regularly interviewed on Arab television and radio. The group also included social activists Tzachi Fenton, Dr. Meir Masri, Dr. Mordechai Kedar, and others active on social networks and in the Arab media, who collectively reach millions in the Arab world.

The visitors filmed videos and uploaded them to social networks to counter the Hezbollah narrative. The goal was to neutralize the group’s messages and tweets and convey to the public in moderate Arab countries the dangers of Hezbollah and other such proxy groups. Hezbollah has spent hundreds of millions on terror tunnels even as Lebanon has spiraled downward into a grave economic crisis. This information is not generally available in Arab countries, especially Lebanon.

Details of the tunnel

The IDF identified the tunnel we visited in January 2019. At the end of May of that year, the IDF plugged an internal section of the tunnel with concrete, sending Hezbollah’s investment down the drain.

The tunnel was excavated from a starting point under the Lebanese Shiite village of Ramya and cut in the direction of the Israeli border towns of Shtula and Zarit, in the upper western Galilee. The depth of the tunnel at certain points is 80 meters below the mountainous topography (equivalent to more than 20 floors below ground). On the Lebanese side, the entrance to the tunnel is about one mile, or a little over one-and-a-half kilometers, from the border. The tunnel penetrated all the way under the border and an additional 77 meters into Israel.

The IDF’s discovery of the tunnel was part of Operation Northern Shield, which was designed to locate and neutralize border-penetrating Hezbollah tunnels on the Israel-Lebanon border. It is unclear whether Hezbollah has other secret offensive tunnels penetrating into Israel that are as yet undiscovered. Whether it does or not, Hezbollah continues to smuggle weapons and drugs over the Israeli border fence despite IDF efforts, which have included the successful thwarting of dozens of drug smuggling operations along the Lebanese border.

According to IDF estimates, Hezbollah began digging this tunnel in late 2014 with the object of carrying out a “first-class” or “quality” attack on Israel in order to increase its influence and reputation in the Arab Muslim world. As Hezbollah tunneled through bedrock and approached the Israeli border, Israeli civilians living nearby began to hear the sound of the excavations deep underground and told the authorities. The defense establishment did not act immediately, but waited until the tunneling crossed under the border into Israel.

Hezbollah had several plans for this tunnel. In addition to using it to conduct acts of terror, including the murder and abduction of Israelis, the group wanted to achieve a propaganda coup by placing its flags and fighters inside Israeli territory. The group intended to film the event and spread the images across the Arab world with the message that it had succeeded in “conquering” northern Israel.

Even if it had been quickly defeated, Hezbollah’s popularity would likely have benefited from such a propaganda success. This kind of boost is important to the group, as its popularity hit a low point in the Arab world with the realization that it is supporting the Assad and Iranian regimes and killing Syrians. Its reputation has taken a beating across the region.

The following photo shows the words “On the way to Jerusalem” written in Arabic by Hezbollah terrorists on the tunnel’s interior wall. In a bid to win the sympathy of the Sunni Muslim world, the Shiite terrorist militia and its Iranian overlords want to be seen as the defenders of Jerusalem.

The IDF affixed a Jewish mezuzah on the doorpost of the tunnel on the Israeli side, enraging Hezbollah followers.

The Cedar Nation teeters on the brink of collapse, in large part due to Hezbollah’s malign political and military influence. (Many Lebanese blamed the group for the enormous port explosion that rocked Beirut last summer.) Hezbollah spends hundreds of millions on tunnels designed to terrorize Israelis rather than alleviate the suffering of the Lebanese people. It is high time these facts became widely known in the Arab world.