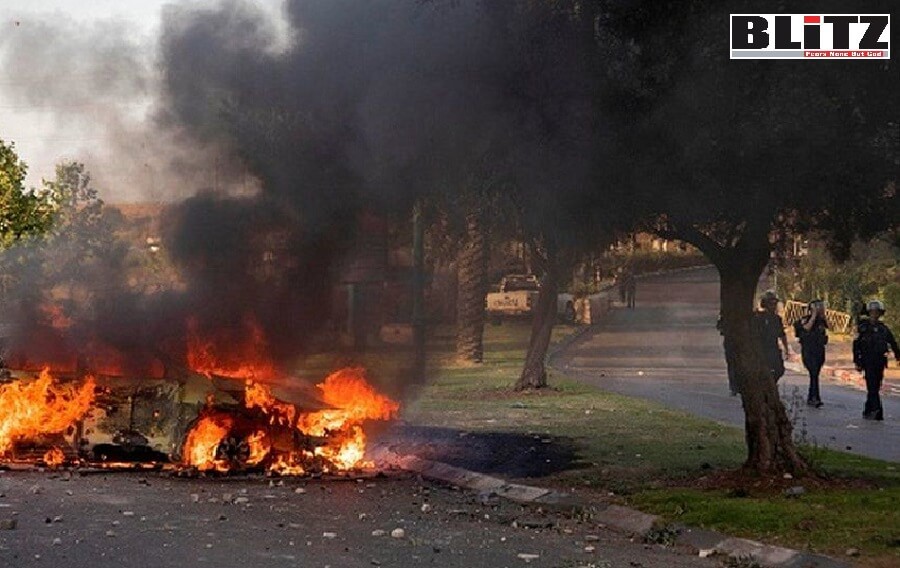 The widespread riots initiated during Operation Guardian of the Walls by Israeli Arabs in support of Hamas—riots that took place while the terror organization was raining thousands of missiles down on the Jewish state, which it seeks to destroy—were a major escalation in their relations with the country’s Jewish majority. This is a serious development, and one that must not be ignored by the Israeli government. Anyone who identifies with Israel’s enemies at any time, let alone in wartime, should no longer be considered a citizen of the country and forfeit the right to benefit from its advantages. Writes Dr. Yechiel Shabiy

During the recent riots across Israel (as well as the West Bank and Gaza), this battle cry was voiced on every front: in Jerusalem, in Lod, in Acco, at intersections that were blocked in the Galilee, in the Negev, and in Wadi Ara. The religious genie issued from the bottle at full force. The confrontation centered on control of the Temple Mount compound—in Arabic, al-Haram al-Sharif, or, as it is currently called, al-Aqsa. Hundreds of thousands of enraged Palestinians and Israeli Arabs made their way to Jerusalem, faithful to the call of Yasser Arafat: “Millions of martyrs, march to Jerusalem!”

The whipped-up rioters poured scorn on Israel’s victories over the Arabs in 1948 (the “Nakba”) and 1967 (the “Naksa”) and swore “Never again.” The situation in Israel— rifts, disputes, one of the severest political crises the country has ever known, government authorities at loggerheads, a police force weakened by the conclusions of the 2003 Or Commission, an army whose soldiers are deterred and hesitant—all these factors indicated to Israel’s enemies that the time was ripe to settle accounts with the Jews.

Warning signs of the national crisis between Jews and Arabs surfaced as long ago as the riots of October 2000, when the country’s Arab citizens responded to the terror offensive launched by Arafat with their own offensive against their Jewish compatriots. Following years saw the emergence of a tradition of visiting the remnants of abandoned Arab communities on “Nakba Day,” including Khirbat Azun in Raanana, Umm Khalid in Netanya, Sheikh Munis in north Tel Aviv, and Kamoun in Yokneam—to express the defiant message that “To these we will return.” The Israeliness of the country has been categorically rejected—because, so it is claimed, Israel sits on “stolen Palestinian land.”

In 2011, MK Ahmed Tibi gave a speech to the Palestinian Authority in which he tied the national struggle to the religious struggle, and then tied the struggle of the Palestinians in the territories to all Palestinians everywhere. He did this by using the term shahidun (martyrs) to refer to terrorists among the Israeli Arabs. In 2014, Tibi claimed that the Temple Mount compound must be handed over to Palestinian control. Five years after that, he informed Israel’s President Rivlin that the Arabs are the real owners of the country while the Jews are colonialist invaders, thereby granting the anti-Israel struggle a specious legitimacy. Similarly, MK Ayman Odeh led the demonstrators during the recent riots and urged them to demand their “national rights” by force.

In 628 CE, the Prophet Muhammad signed a ceasefire agreement in Hudaibiya with his main enemies, the residents of the city of Mecca. When supporters criticized him for the move, Muhammad found a scapegoat he had used in the past: the Jews of the Arabian Peninsula, in that instance the wealthy Jewish villages of Khaibar and Wadi al-Qura in the northern Hijaz.

After tempting the Jews of Khaibar into peace talks, Muhammad killed the Jewish leaders and military commanders who showed up for the talks and put Khaibar under siege. After about 30 days of warfare the Jews surrendered. In return for being allowed to remain on their land, they agreed to accept the supremacy of Islam and to pay no less than half of their income to the Muslims. This agreement became a model for the Muslims in other places they conquered—a land tax of 50%, a poll tax, and acknowledgment of Islam’s supremacy.

Likewise, in the wake of the Muslim conquest of the Land of Israel, the Jews disappeared from places they had lived in for hundreds and even thousands of years. Jews lived in Hebron from biblical times until the massacre of 1929. They lived in Nablus and Gaza until 1937. They lived in the Muslim Quarter, Silwan, and other parts of Jerusalem until they were expelled during the 1936-39 riots and the War of Independence. Once the Jews had been evicted, these places became “Palestinian.”

In the 2021 riots, the “Khaibar model” recurred once again, as considerable parts of the Jewish state became extraterritorial for Jews who feared setting foot in them— from Arab-populated areas of the Galilee and the Triangle to mixed cities like Haifa, Jaffa, Lod, Ramla, and Acco to parts of the Negev that Bedouin communities have long been appropriating as their own. What emerges is a territorial map identical to that of the 1947 partition plan—as in the words of the Palestinian saying, “Al-Jalil mithl al-Khalil,” or “The fate of the Galilee is the fate of Hebron.” In other words: the Jews are to be thrown out and the area rendered “Palestinian.”

The riots conducted by Israeli Arabs while Hamas was raining thousands of missiles down on the Jewish state constitute a betrayal of the country of which they are citizens. As such they represented a major escalation in Israeli Arab relations with the country’s Jewish majority, a serious development that mandates a firm response from the Israeli government. Anyone who identifies with Israel’s enemies at any time, let alone in wartime, should forfeit his citizenship of the country he is attacking and should not continue to benefit from its advantages.

Dr. Yechiel Shabiy is a researcher at the BESA Center and a political science lecturer at Bar-Ilan University.