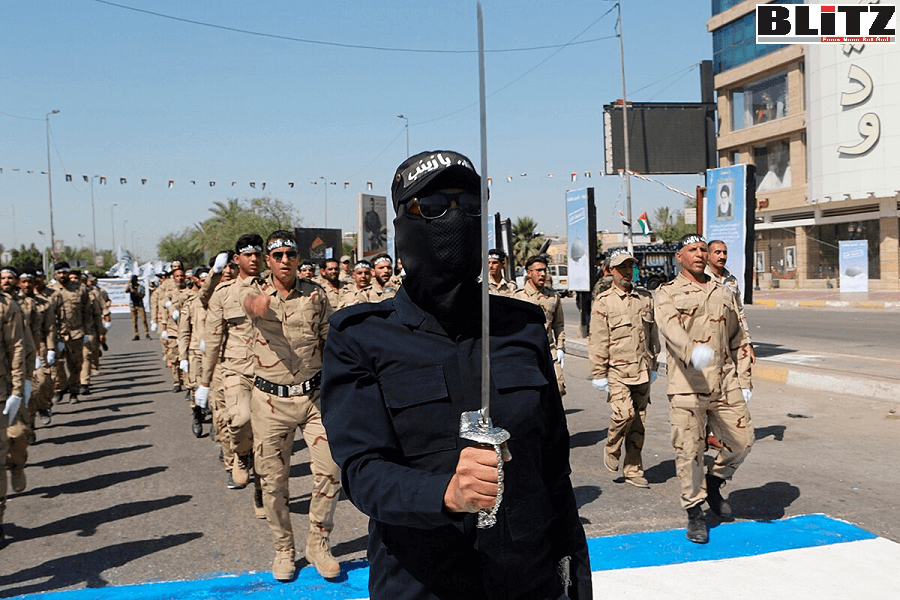 Iraq’s constantly-shifting militia networks have frustrated American and Iraqi policymakers across multiple administrations. In Washington, the problem is often boiled down to a simple case of Iranian aggression because some of the militia groups take support and occasional direction from Tehran. But the reality is far more complex, senior military officials and analysts in the region say. Writes Katie Bo Williams

“I think there’s two major threats to the country of Iraq right now: One is the PMF” — the military abbreviation for the militia groups — “and two is the economy,” said Lt. Gen. Paul Calvert, the commander of the U.S.-led mission in Iraq and Syria. “Both left unattended is going to erode all the gains that have been made, in my mind.”

Iraq’s constantly-shifting militia networks have frustrated American and Iraqi policymakers across multiple administrations. In Washington, the problem is often boiled down to a simple case of Iranian aggression because some of the militia groups take support and occasional direction from Tehran. But the reality is far more complex, senior military officials and analysts in the region say.

The larger problem is that the government of Iraq has “very little” control over the militia groups, Calvert and others said. And although some of the major militia groups have some shared objectives — like the removal of U.S. forces from Iraq — they are also divided over the issue of Iranian influence in Iraq.

“It’s clear to me and people that I’ve talked to [in Iraqi government], there’s a significant amount of concern in terms of the possibilities of an internal Shia civil war between those that are aligned to Iran [and] those that are Shia nationalist,” Calvert said in a February interview at the U.S. military headquarters in Baghdad.

The so-called Popular Mobilization Forces grew up in response to the rise of ISIS in 2014 and were critical to its defeat. Some of them were absorbed into the Iraqi security state — with an annual budget of $2.6 billion in 2020 — while others now operate outside of government but maintain informal ties to the the PMF network. Some serve as de facto security services in some underserved areas. Some exert formal political power in Iraq; in 2018, candidates representing various groups won 48 seats in the Iraqi parliament. Several MPs are former or current fighters, such as Qais al-Khazali, who leads the Asaib Ahl al-Haq group and who was designated as a terrorist by the United States in 2019.

Some of the groups have attacked U.S. forces in the region. President Joe Biden was confronted with the problem almost immediately: A spate of recent rocket attacks, including one on an air base in Erbil that killed a U.S.-employed contractor last month, led the new commander-in-chief to order seven 500-pound bombs dropped on facilities in Syria used by two militias to smuggle weapons.

Biden said the strike aimed to send a message to Iran: “You can’t act with impunity. Be careful.”

It was roughly the same message the Trump administration delivered: That it would hold Iran accountable for attacks on U.S. forces by its proxies.

There is no question that Iran is seeking to “turn Iraq into a proxy state of Iran,” Calvert said. “There’s a two-pronged approach…by trying to dominate through influence into the political blocs that are aligned to Iran, and then through the proxy forces” — the militia groups that take support and direction from Tehran, he said.

But military officials say, it’s often difficult to fix attribution for a given attack on Tehran. Although some of the more active groups, like Kataib Hezbollah, are “generally responsive” to Iran, “not every entity at every level” does as directed, said Marine Corps Gen. Frank McKenzie, the top U.S. commander in the Middle East, in a January interview. Some attacks are carried out at the express direction of Tehran, but some local attacks are a surprise to Iranian state leadership. And some of these groups use “a variety of front organizations…try to control or hide the attribution,” McKenzie said.

Biden chose to retaliate against the militia groups responsible for the Erbil attack — including Kataib Hezbollah — whereas Trump did not shy from attacking Iran directly. Trump in January 2020 ordered the killing of Iranian Gen. Qassem Soleimani in response to a recent Kataib Hezbollah attack that killed an American contractor on another Iraqi military base. In March, he ordered strikes on five Kataib Hezbollah sites in Iraq after another attack killed two Americans and one U.K. medic.

In the United States, the Syria strike has reinvigorated a debate over the president’s war powers and highlighted the complexities of responding to an armed group with which the United States is not at war.

“Congress hasn’t yet authorized military action against Iranian actors,” Sen. Tim Kaine, D-Va., told reporters on Capitol Hill on Tuesday. “This isn’t a full-blown war, but if you allow presidents on their own say-so to engage in back-and-forth action, then suddenly you are in the middle of something and the American public haven’t been brought into it and Congress hasn’t been asked to weigh in.”

And inside Iraq, both the complexity and entrenchment of the various PMF have made efforts to rein them in by the current prime minister, Mustafa Al-Kadhimi, an uphill climb.

“He’s seen and realized opportunities that he’s tried to capitalize on,” Calvert said. “I think some have worked. Some have had little to no effect.”

Some of the groups are growing in power, Calvert and others have suggested. Kataib Hezbollah, in particular, may be “transitioning to being much more of a regional-oriented organization aligned to Iran that could turn into a regionally-focused proxy” — rather than one operating solely in Iraq, Calvert said.

Even with recent Trump-era drawdowns to 2,500 troops, Calvert said, he is comfortable with his ability to protect U.S. troops in Iraq. But the threat to the legitimacy of the Iraqi government is far greater.

Iraqi Lt. Gen. Abdul Amir Al-Shammari, the deputy commander of the Iraqi command with which America partners in the fight against ISIS, “talks about the threat in four areas,” according to British Army Maj. Gen. Kevin Copsey, the deputy commander for strategy in the American-led coalition. The first three are traditional security concerns: ISIS, the porous border with Syria that allows for arms smuggling, and ongoing political jockeying with the semi-autonomous Kurdistan region.

It would not be the first time that Iraq was convulsed by fighting between the government and a diverse combination of militias, most notably in a 2007-08 Shia civil war that pitted the government against Iraqi nationalist militias, Iranian proxy militias, and Iran-aligned but Iraqi-commanded militias. Many of the groups that fought then are the same groups bedeviling American and Iraqi policymakers today — including Kataib Hezbollah and Asaib Ahl al-Haq.

“Unless the government comes up with a proper strategy to deal with them, in five years’ time, it could end up tearing the country apart,” Copsey said.

Republished from the Defense One journal