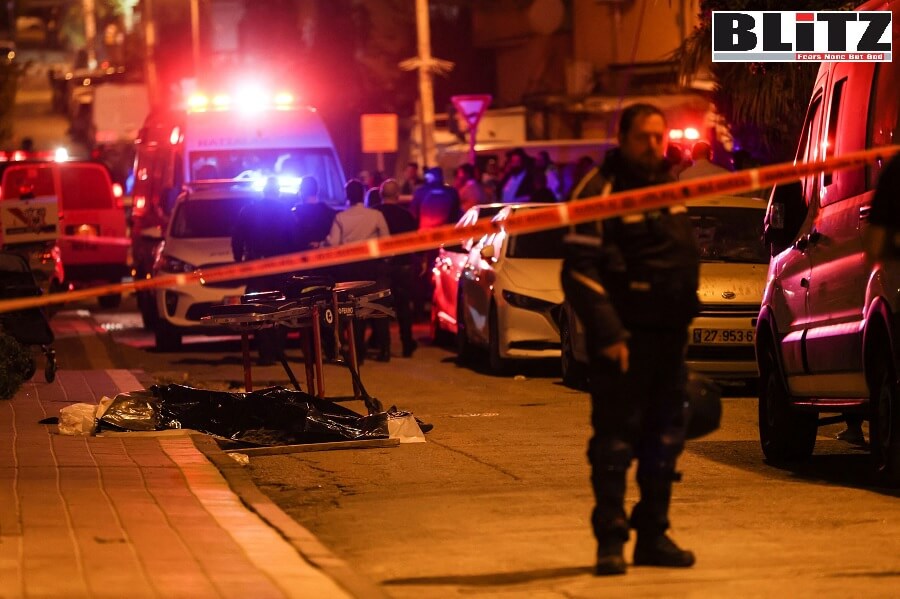 While every conscious individual in the world are condemning the recent series of cowardice terrorist attacks by the Palestinians on innocent citizen of Israel, Qatar and its terror-broadcast Al Jazeera along with several pro-jihadist individuals and organizations are continuing praising the terrorists and the terrorist acts.

It may be mentioned here that on April 7, 2022, there were terrorist attacks in Tel Aviv, in which three innocent Israeli citizens were killed. But sadly Qatari media, especially Al Jazeera were overwhelmingly positive with writers and hosts praising such brutal actions.

The Palestinian perpetrator, Ra’ad Hazem, was called a martyr and his death a martyrdom operation (istishhad). The Qatari Al-Quds Al-Arabi daily, which is published in London, called the shooting a “quality attack that will go down in the history of the Palestinian resistance and its quality operations”.

Qatari establishment dailies published articles in praise of the attack and its perpetrator. In his column in the Al-Watan daily, Palestinian journalist Samir Al-Barghouti praised Hazem – whom he referred to as “Palestinian heroes” – for joining the ranks of terrorists and added that it was worth sacrificing one’s life to defend the Muslim holy places.

In an article in the Al-Sharq daily, Qatari journalist Aisha Al-Obaidan justified the recent wave of terror attacks in Israel, and castigated the Arab country that condemned them. She contended that they were not terrorist attacks but martyrdom operations for the sake of Palestine. Other Qatari journalists and reporters for the Qatari-Al Jazeera media network extolled the attack and attacker on social media, as they did previously for other terror attacks in Israel, in Beersheba, Hadera, and Bnei Brak.

In his column in the Qatari daily Al-Watan, Palestinian journalist Samir Al-Barghouti eulogized terrorist Ra’ad Hazem. Congratulating him on joining the roster of Palestinian heroes, including leading Hamas operative such as Yahya ‘Ayyash, one of the founders of Hamas’s military wing Izz Al-Din Al-Qassam brigades who instituted the method of suicide bombings, he added that resistance in defense of the holy places requires harnessing every resource and even sacrificing one’s life. Al-Barghouti wrote:

“You have gone down in history with your [lightning] flash, your thunder [ra’ad in Arabic, i.e. his name], and your determination [hazem, his surname]. You went out from Jaffa [where you were killed] as a martyr, to write your name in blood alongside the names of the Palestinian heroes [who have died] since the start of the resistance. May you be blessed [in Paradise] with the friendship of [Hamas spiritual leader Sheikh Ahmad] Yassin, [Hamas cofounder ‘Abd Al-‘Aziz] Al-Rantisi, and [Yasser] Arafat. May you be blessed with the companionship of [senior PFLP official] Ghassan Kanafani, [Fatah cofounder and Arafat’s deputy and spokesman] Kamal Nasser, [senior PLO and Fatah officials involved in the 1972 Munich Olympics massacre of Israeli athletes] Kamal Al-‘Adwan and [Muhammad] Yousuf Al-Najjar. Enjoy the friendship of…  [Fatah coleader and founder of the Black September organization] Abu Iyyad and of Abu Jihad [Khalil Al-Wazir, Fatah cofounder and head of the PLO military wing] and your beloved Yahya ‘Ayyash…

“Your name rocked the [Zionist] entity from Tel Aviv to the ends of the world – the hypocritical [world] that welcomes the Zionists’ acts of murder against your [Palestinian] people [but] condemns the wounding of a Zionist goat.

“Yes, this is resistance. We advocated it in the Jordan Valley and in the Golan. It was [also] advocated in South Lebanon, and the people of Gaza and Jenin shouldered the responsibility for it and paid with their lives – for resistance is the beginning, the middle, and the end.

“Ra’ad did not belong to any organization, but he fiercely loved Palestine and felt that a life of freedom, moral resilience, and self-respect [requires] striving for justice and honesty and opposing oppression and arbitrary [force]. Resistance means defending and safeguarding one’s rights and making sacrifices to defend them. Conversely, giving up rights and accepting their theft without opposition is a flaw that kills honor, and a disease that paves the road to treason. This is because resistance coordinates between the truth and its owners, because rights and those who own them never expire and are never cancelled by imposing facts on the ground…  A right that is backed by a resistance fighter is never lost…

“I believe that resistance aimed at safeguarding vital foundations and the holy places [requires] harnessing all the forces and maximizing all the capabilities, without sparing money or effort. Moreover, we should sacrifice our lives for it. This is in accordance with human justice, not to mention the Islamic way and the tenets of the faith… Resistance to aggression has great significance, and richly rewards [those who engage in it].

“That is what the engineer Ra’ad Hazem believed when he brought forth the viper from its hole. It is time to bombard that viper – and then the world may have respite from its evil”.

In an April 10 article in the Al-Sharq daily, Qatari journalist Aisha Al-Obaidan justified the recent wave of terror attacks in Israel, calling them martyrdom (istishhad) operations for the sake of Palestine, and also came out against the Arab regimes that condemned them. She wrote:

“How can we attain victory[?]! How can we, the Islamic nation, regain our honor[?]! How can we cry out our motto ‘Jerusalem is ours[?]!’ Can we not see what is happening and hear what is being said[?]!

“In Jerusalem, there are killings, arrests, and destruction, and flowing blood covering the earth; there are widows and orphans, and the Zionists are polluting the sacred soil of Jerusalem… [Yet] our Arab countries are welcoming [the Zionists] and letting them play sports and participate in national events… They welcome the Zionists whose hands are stained with the blood of innocents, and [Arab and Israeli officials] conduct reciprocal visits… Some even see these martyrdom operations as criminal acts of terror, and our Arab regimes hasten to publicly condemn them in the media… [although these are actually] martyrdom operations that are [being carried out] at an accelerated pace, that have rocked the Zionist entity while highlighting the fragility of its security and military apparatuses and sparking terror in its heart.

“All religions and sects consider the killing of innocents a crime. Human morality rejects the killing of innocent souls… But the issue of Al-Aqsa is still an issue for the Arabs and Muslims, and is an integral part of their faith, history, and culture… and responsibility for it rests with the Islamic and Arab nation…

“The Palestinian operations in Jerusalem will continue to be martyrdom operations [not terror attacks], despite the best efforts of the Arab regimes that are loyal to the Zionists… Force of arms will remain our weapon for confronting the occupying enemy. Allah the Almighty said: ‘And prepare against them whatever you are able of strength’ [Quran 8:60].

“How strange [that we are in] an era when the enemy is a friend and the friend is an enemy. Since childhood, we have declaimed ‘Long live free and proud Palestine.’ Since childhood, we have been accustomed to giving what little we have for the sake of Palestine… In our Islamic studies curriculum, [we learn] that the Jews are the enemies of the Muslims… that force must only be answered with force and the sword, and that he [who dies] defending his land, what is holy to him, and his money is a martyr.

“How different is today’s attitude to the Palestinian murabit [fighter on the front] – some Arab regimes now see him as a terrorist… How can we demand an end to the martyrdom operations of the resistance[?]!! How can we call them acts of terror[?]!! How can we do this when these operations are aimed at defending the homeland, the soil, and a religious cause, and constitute opposition to the occupation[?]…

Qatari journalists and Qatari Al-Jazeera TV presenters have lauded both attack and perpetrator on social media. In a tweet, Qatari journalist Ebtesam Aal Sa’ad, who writes a column for the Qatari Al-Sharq daily, dubbed the attack “Ramadan blessings,” and quoted a verse from the Quran which implies that terrorists who carry out attacks are none other than messengers of Allah. She wrote:

“Tel Aviv is illuminated by Ramadan blessings. ‘[You did not kill them, rather Allah killed them] and it was not you who fired when you shot, rather it was Allah Who fired’ [Quran 8:17]

“The martyr of the homeland, from the Jenin refugee camp – Ra’ad Hazem – is as his name asserts [resolute thunder]”. In a subsequent tweet, he stated: “In Tel Aviv, a resistance fighter defeats the [Zionist] entity. The entity will not continue to exist, even if this takes time”.

On April 7, during the manhunt for the terrorist, Qatari journalist Jaber Al-Harmi tweeted: “As of right now, none of the Zionist security apparatuses have managed to apprehend the perpetrator of the operation… in Tel Aviv, nor to determine his location or identify the type of weapon he used. The theory of Zionist security control is crumbling under the blows of the operations of the resistance fighters – the real owners of the land”.

Al-Jazeera presenter Ahmed Mansour tweeted a video clip on April 8 showing the scene of the attack during the search for the terrorist, and wrote: “Following the fidai operation, hundreds of Israeli soldiers are hunting down the fidai who carried it out. Because of the widespread panic in Israel, authorities are asking 3.5 million settlers in Tel Aviv to remain in their homes. An entire country is mobilizing against one fidai and millions of terrified people are imprisoned in their homes. A single resistance fighter has struck terror into an entire occupying country”.

Mansour also tweeted photos of Hazem, writing: “Ra’ad Hazem, the perpetrator of the attack in Tel Aviv, who was a Palestinian computer expert and a son of the Jenin refugee camp, was martyred after humiliating the Israelis. They spent a black night in horror imprisoned in their homes, as an entire army of thousands of Israeli soldiers pursued him for nine hours. He moved around freely until he reached Jaffa, where he confronted an Israeli force and was martyred. May Allah have mercy on him”.

British-Palestinian Journalist Abdel Bari Atwan Praises Palestinian Terrorist Raad Hazem: He Shot The Settlers In Tel Aviv, Made The Israelis Flee Like Mice; There Are No Civilians There, They Are All Military.

In a video that was uploaded to his YouTube channel on April 8, 2022, British-Palestinian journalist Abdel Bari Atwan praised Raad Hazem, the Palestinian terrorist who killed three Israelis and wounded severa others in a previous-day shooting in a bar in Tel Aviv, Israel. In the video, which had over 500,000 views, Atwan said that the terrorist was a hero who made the Israelis flee in terror “like mice.” He also said that the Palestinians do not accept the “story of Israeli civilians” because even Israeli civilians they are active or reserve members of Israel’s security forces. He added that today the Palestinians are manufacturing guns, and tomorrow they will manufacture rockets.