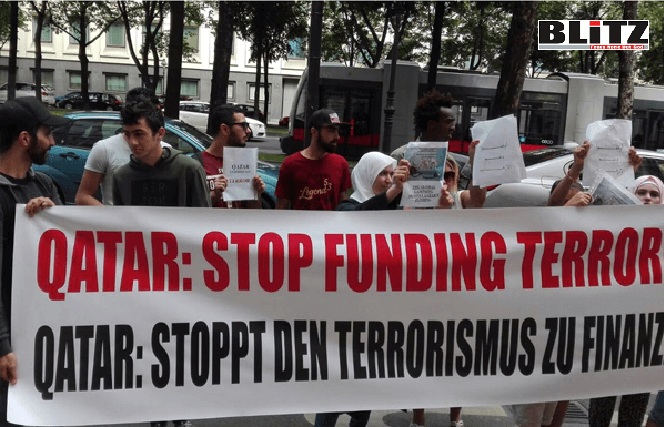 There is no doubt that the Internet has become the primary tool used by countries and other entities to serve their agendas and facilitate the flow of information in a super-timely manner. Topics that encompass all walks of life and all sorts of files that surpass any imagination have become easily accessible through the Internet. However, one country in the Middle East decided to use its financial resources to advance causes that are considered malignant according to the principles of civilized societies. Qatar has been enlisting these digital tools to serve a wide range of goals that go beyond its borders or internal interests. Meddling with both regional and international affairs has become one of the characteristics of this rich Gulf state.

Counting on almost limitless financial support from the Emir of Qatar, Hamad bin Khalifa al Thani, the Qatari Al-Jazeera TV station was established in 1996. It attracted renowned Arab journalists from international stations such as the BBC. It became an unofficial podium for the Muslim Brotherhood movement, as many of its anchors have been known to be affiliated or sympathize with this terrorist group.

The renowned Al Jazeera served also as a channel for many terrorist movements throughout the region, allowing them to disseminate their points of view and ideologies. After the 9/11 attacks, it became the main source of information coming out of Taliban-controlled Afghanistan. Al Qaeda used its offices to send out Osama bin Laden’s video messages.

It played the same role in Iraq after the fall of Saddam Hussein’s regime in 2003, when it quickly took the lead in highlighting terrorist attacks against US troops and the newly formed Iraqi governments.

In Gaza, Al Jazeera remains the main source of information regarding Hamas since it usurped power in 2007 from the Palestinian Authority and turned the strip into a launching pad for its missiles against residential areas inside Israel.

Consequently, many of its reporters were accused of supporting terrorist groups, including the Syrian Tayseer Allouni, a reporter who interviewed Osama bin Laden after the 9/11 attacks. In 2005, he was sentenced in Spain (his naturalized country) to seven years in prison on charges of transferring money and collecting donations to Al Qaeda.

Another journalist from Al Jazeera was the Sudanese cameraman Sami Al-Hajj, who was arrested in Pakistan and spent six years in Guantanamo Bay on charges related to terrorism and facilitating the flow of weapons and money to support Al Qaeda and other terrorist groups.

But the most intriguing case is that of an official website of the State of Qatar affiliated with the ministry of endowment, established in 1998, which has issued more than a quarter of a million Islamic religious fatwas. The site has been visited by more than 3 billion people.

This site is called IslamWeb. It targets all ages as well as all groups of people; to Muslims, it provides them with information to enrich their Islamic Sharia-related information, and to non-Muslims, it works as a propaganda machine to present Islam as a religion of tolerance and moderation that provides solutions to all life’s problems.

The site also offers a chat portal, a global portal in which the person requesting a fatwa (a legal judgment on a topic of Islamic law issued by a qualified jurist in response to a query posed by a private individual, judge, or government) communicates directly with the muftis. The issue in question and for which a fatwa is requested is presented orally.

The portal is used by many people who prefer a quick and direct fatwa without waiting for a written reply. (No need to visit any of the 76 mosques in France which are currently under surveillance.) Qatar, in addition to its export of liquefied gas and oil derivatives, has been exporting Islamic fatwas, which, according to the website, have reached 190 countries around the world.

Islamweb was initially founded as an Arabic-language site and expanded its services until it included five languages: Arabic, English, French, Spanish, and German. Soon, the Indonesian language portal will be launched through which the various Islamweb services are published.

Another important theme of the site is its efforts towards children’s groups, which is handled by portals called “German boys and girls,” “French boys and girls,” and soon they will launch a portal for children in Spanish.

These portals include entertaining educational materials for children that are presented through the use of high-end methods to tackle specific Islamic topics. The portals also include interactive activities with the public in which the child can learn many aspects of Islam.

Qatar makes endless efforts to play on the strings of jihad through a framework that seeks to appear to be innocent remains a main controversial issue regarding its relationships with its neighboring countries, such as Saudi Arabia, UAE and Bahrain.

While Islamic lobby groups and Islamic apologists are pushing for laws that prohibit criticism of Islam and curb voices that support the freedom of speech, monitoring of these websites more thoroughly to ensure that they are not used to fuel terrorism or encourage violence is long overdue.

It is clear that Qatar has succeeded in protecting its citizens from directly getting involved in terrorist activities or jihadist movements by focusing outside its boundaries. It has been providing financial support to Islamists almost worldwide, while keeping the Taliban office running in Doha with a diplomatic mission status.

During the last two decades, many senior Qatari officials have been involved in financing terrorist groups such as Al Qaeda, ISIS, and Hamas. Some of these officials remain on the list of terrorist-sponsoring persons.

It is worth noting that “Qatar Funds,” which is supposed to be a charitable organization, has been mentioned as a source of finance for bin Laden.

In 2017, Defense Secretary Robert Gates expressed his concern and said that he doesn’t “know instances in which Qatar aggressively goes after (terror finance) networks of Hamas, Taliban, Al-Qaeda.”

In the midst of the prevailing global situation, it is imperative to focus on more accurate monitoring and practical steps to control the takfiri ideology. Instead of relying on empty slogans such as “Islam, a religion of peace” in order to avoid their danger and limit their terrorism, more stringent steps need to be taken.