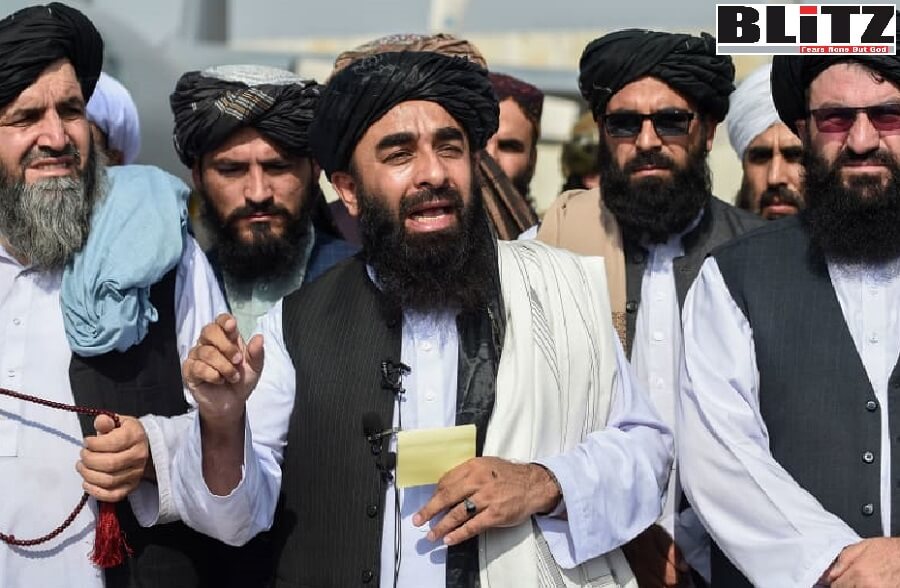 Following a disastrous withdrawal from Afghanistan and letting the country fall into the grips of jihadist forces, Biden administration seems to be repeating a second blunder by recognizing the Taliban jihadist regime in Kabul. According to media reports, senior Taliban officials (read jihadists) and US representatives are holding talks about “containing extremist groups in Afghanistan and easing the evacuation of foreign citizens and Afghans from the country”. The talks are taking place in Doha in Qatar, where Taliban jihadists had earlier met and succeeded in reaching into a deal that had enabled them in invading Afghanistan.

Taliban spokesman Suhail Shaheen, who is based in Doha, told The Associated Press on Saturday that the talks will also “revisit the peace agreement the Taliban signed with Washington” in 2020.

“Yes there is a meeting . . . about bilateral relations and implementation of the Doha agreement”, said Shaheen. “It covers various topics”.

Terrorism will also feature in the talks, said a second official who spoke on condition of anonymity because he was not authorized to speak to the media.

Since the Taliban took power, Islamic State extremists have ramped up attacks on the militant group, as well as ethnic and religious minorities. On Friday, a Daesh suicide bomber killed at least 46 minority Shiite Muslims and wounded dozens in the deadliest attack since the US departure.

ISIS has carried out relentless assaults on the country’s Shiite Muslims since emerging in eastern Afghanistan in 2014. Islamic State is also seen as the greatest threat to the United States.

Dozens of American citizens are still seeking to get out, according to the State Department, along with thousands of green-card holders and Afghans and family members believed eligible for US visas. US officials have cited the difficulty of verifying flight manifests without any American officials on the ground in Afghanistan to help, along with other hold-ups.

Americans also intend to press the Taliban to observe the rights of women and girls, many of whom the Taliban are reportedly blocking from returning to jobs and classrooms, and of Afghans at large, and to form an inclusive government, the official said.

US officials will also encourage Taliban officials to give humanitarian agencies free access to areas in need amid the economic upheaval following the US departure and Taliban takeover.

The official stressed the session did not imply the US was recognizing the Taliban as legitimate governors of the country. But in reality, Taliban leaders won’t accept any of the proposals put forward by the US side during the Doha meeting unless Washington recognizes the rogue jihadist regime. Meaning, Joe Biden and his administration are now advancing in extending recognition to establishment of Islamic State in Afghanistan, which only would encourage other jihadist groups in the region in further accelerating their notoriety.

It may be mentioned here that, until now, no country in the world has formally recognized the Taliban as the official government of Afghanistan — although Russia, China, Pakistan and Iran have signaled varying degrees of openness to doing so.

The Taliban announced a so-called “caretaker” government in September 2021. One thing is clear: The “new Taliban” looks a lot like the old Taliban.

The caretaker government comprises hard-liners and internationally designated terrorists. No women were appointed into the government. While a small number of ethnic minorities received a few relatively junior positions, no leaders of Afghanistan’s significant minority groups — the Uzbeks, Tajiks and Hazaras — were included. Despite early speculation that former Afghan President Hamid Karzai, former Chief Executive Abdullah Abdullah and pardoned warlord Gulbuddin Hekmatyar would form part of the caretaker government, all were excluded.

Instead, the government is populated by key officials from the first Taliban government of the late 1990s and those actively involved in the insurgency against international and Afghan forces since 2001. Several new senior Taliban government officials are considered war criminals by the international community. For example, Deputy Defense Minister Mullah Mohammed Fazil and Minister for Borders and Tribal Affairs Mullah Noorullah Noori are accused of ordering the massacres of ethnic Hazara, Tajik and Uzbek communities in Mazar-e-Sharif in 1998. At least 14 members of the Taliban’s so-called caretaker government are under some sort of UN sanctions.

Perhaps most concerning, several new government ministers are members of the notorious Haqqani network, a terrorist outfit with close links to Al-Qaeda that was responsible for some of the deadliest terrorist attacks ever seen in Afghanistan. Leaders of the Haqqani network were given four plum positions in the caretaker government. For example, Sirajuddin Haqqani, who is not only the leader of the Haqqani network but was also nominated to be the Taliban’s deputy emir in 2016, is now serving as the powerful minister of interior. Sirajuddin’s uncle, Khalil Haqqani, is now the minister for refugees. Khalil was also responsible for security in Kabul at the time of the August Daesh-Khorasan suicide attack that left almost 200 people dead. The FBI has a US$10 million bounty on Sirajuddin’s head, while offering a $5 million reward for Khalil.

The UN is also becoming a geopolitical battleground for the Taliban. Some UN members seem eager to recognize the Taliban as the legitimate government of Afghanistan, but most are unwilling to do so at this time. The question about Taliban participation was raised during last month’s UN General Assembly gathering in New York. The current Afghan representative is a hold-over from the previous Ghani government. Even though the Taliban formally requested to send a representative to speak at the UNGA, nobody ended up speaking for Afghanistan during the event. According to experts, Recognition by the UN would mean the Taliban inheriting Afghanistan’s existing membership in other UN bodies, including UNESCO and the Commission on the Status of Women. Considering the Taliban’s track record of destroying UNESCO cultural sites such as the Buddhas of Bamiyan and its well-established record of mistreating women and girls, it would be preposterous to allow the militant outfit into either organization.

It is essential for the international community to understanding, recognizing Taliban regime and letting these jihadists occupy the presidential palace in Kabul will plant the seed of the madness of establishing and expanding the area of Caliphate in the region and the world. Hopefully Joe Biden will not become the key patron of such evil actions.