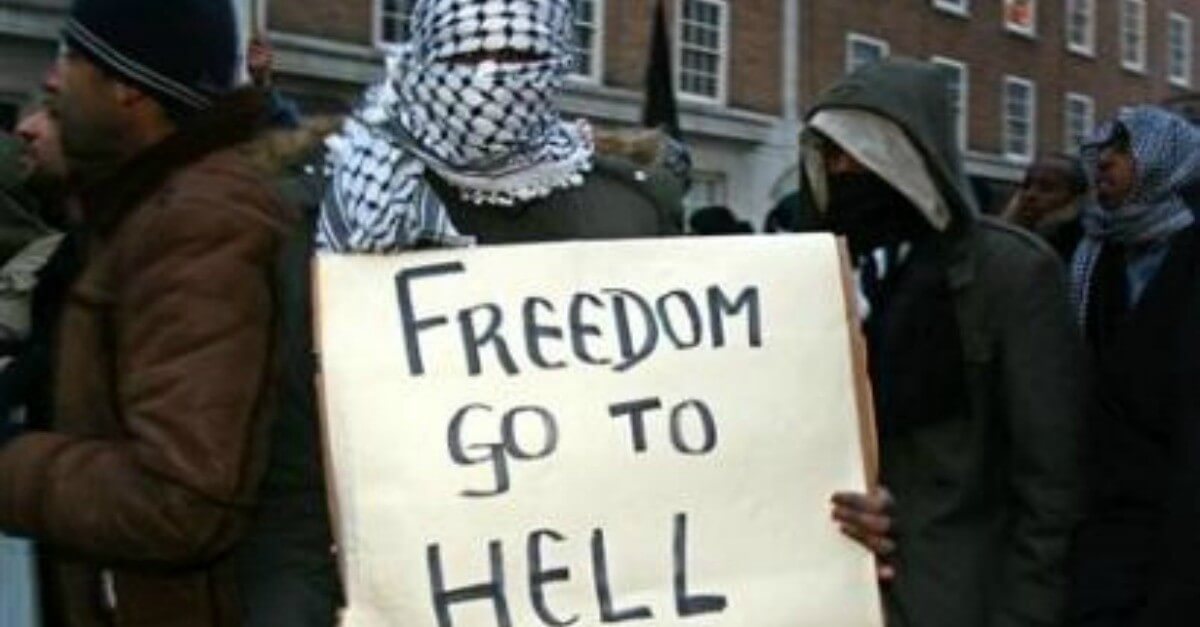 Pulling down the makeshift camp at Calais had to be done, for the good of the French being threatened in Calais. The fault here is with those breaking the law with their makeshift camp, not with the French authorities who dare to enforce it.

So what can be done? Extreme circumstances have prompted extreme responses, with one French intellectual, Professor Christian Moliner, even suggesting a parallel Muslim state should effectively exist in France, so that any Muslims who wished to do so could follow sharia law, in order to prevent civil disturbances. He said that if this did not come about, there could be a civil war in France.

Moliner, an author on Islam, stated: ‘We can never convert the 30 per cent of Muslims who demand the introduction of sharia law to the merits of our democracy and secularism.

“We are now allowing segregation to take place that does not say its name.’’

This suggestion by Professor Moliner is madness. It shows how unhinged the Muslim invasion of Europe has made people. Were the French to meet the demands of those Muslims in France — by his own calculation, at least two million of them — who want to live under the Sharia, then a parallel state within France, run according to the Sharia, would be created. That means millions of people would be outside the French legal system. Family law would presumably allow for polygyny, would include the right of a husband to beat a “disobedient’’ wife; would permit a husband to divorce his wife by uttering the triple-talaq; would give a daughter only half the inheritance rights of a son. The criminal law would include barbaric punishments, including amputations for robbery and stoning for adultery, that in the advanced West we rightly cannot countenance. Instead of religious freedom, apostates from Islam could be subject to execution. As for freedom of speech, those wishing to live under this legal regime would be able to punish “blasphemy,” which should shut down any public criticism of Islam or of Muhammad.

There is a better way. That is for the French state to reassert itself, to change the rules before the Muslim population gets even bigger. The government can put an end to Muslim immigration; it has a right to decide whom it will allow to enter and settle, and whom it wants to keep out. It need not be defensive about recognizing the unprecedented menace of Muslim immigrants. It has a responsibility to draw conclusions from, rather than ignore, its experience of large-scale Muslim immigration. Despite the great openness the French initially displayed toward Muslims, and the continuing generosity of the French state, such immigration hasn’t worked out. A determined and sustained effort should be made to deport all illegal Muslim migrants. Those who are dual nationals, if found to have supported terrorist groups, should be stripped of their citizenship. The French need to recognize that an undeclared war is being waged by Muslims in France against France. Once this is understood, a legal framework sufficient to the task can be created. Of course, this assumes that the French authorities will come to their senses in time. Ideological surrender born of despair, which is what Christian Moliner counsels with his Sharia proposal, should not be an option.

Even Left-wingers belatedly acknowledge the scale of the problem. Veteran politician Jean-Louis Borloo, a former minister, was this year tasked by President Macron to research and write a report on the burgeoning problem of the Parisian suburbs.

As well as recommending that €5 billion be spent, he stressed the need for ‘national reconciliation’, especially in districts facing up to the withdrawal of French identity and community, which in turn fuels xenophobia.

How can the French have “national reconciliation” with Muslims, whose Qur’an teaches them to regard themselves as the “best of peoples” and non-Muslims as “the most vile of creatures”? With Muslims, who are taught to wage violent Jihad against Infidels in over 100 Qur’anic verses, and to “strike terror” in their hearts? With Muslims, who are told to never take Christians and Jews as friends? When, as Borloo says, Muslims withdrew from a French identity and the French community, what should the French have done? They didn’t will it; the Muslims did. Why should the “best of peoples” have to reconcile with the “most vile of creatures”? And if the French feel a justified anger after all the sums that have been and are still being spent on ungrateful and hostile Muslim migrants, happy to pocket still more of French taxpayers’ money (and another 5 billion euros, as suggested by Jean-Louis Borloo, will be pocketed, but not change Muslim hearts and minds), it is wrong to call this “xenophobia.”