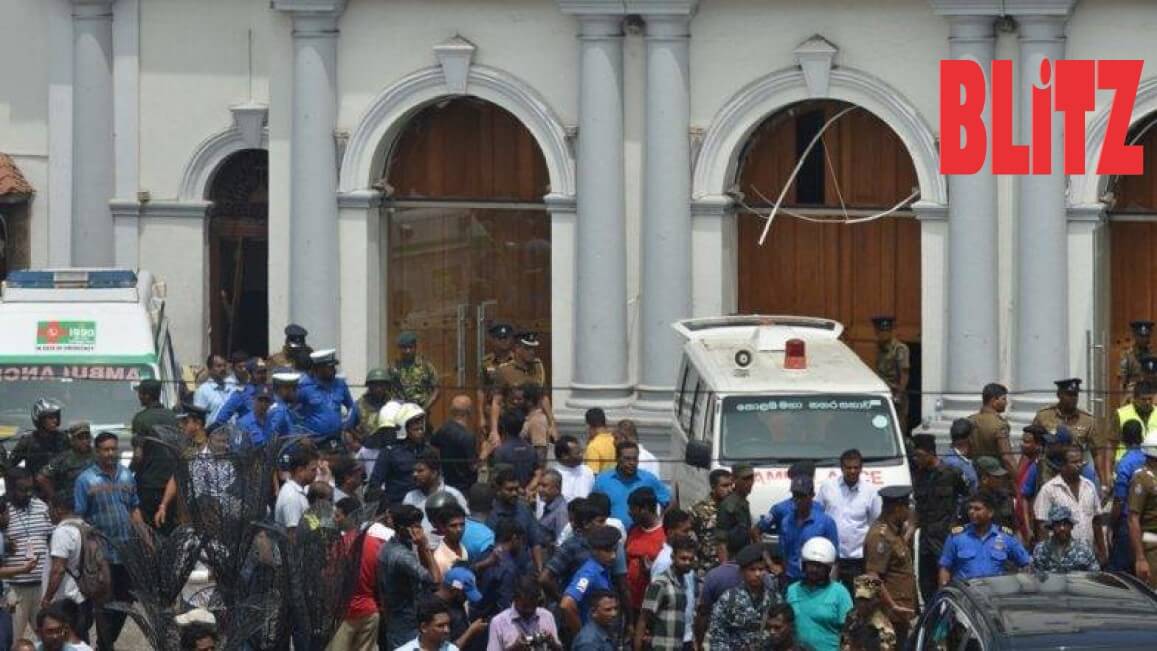 While the heinous count of victims is still on the way in Sri Lanka as well as new attempts to spread terror, we can make a framework assessment to put in a better perspective all further information have to come. The presence of 33 Islamic State Jihadist from Sri Lanka, trained at war in Syria (Raqqa) can explain the great impact of these attacks? It maybe is not enough.

Simultaneous attacks mean there is no anti-terrorism security frame that could work. Indonesian experience of recent years showed poor training and efficiency in Jihadists actions. Sri Lanka heinous bombing is a big leap forward. South and SE Asia is not easy places to produce a quick understanding. Instant coffee analyses are not the matter. We need a sort of basic checklist, to better outline the picture: country political instability and dirty games; strong influence of Wahaabi over the Muslim country minority and the help Muslims gave to fight Tamil’s threat; the strategic chessboard of USA-China confrontation that makes every single pawn, even apparently the smallest, a key player; the main media poor narrative looking for simplification because they don’t like deep assessment.

So, we just have a look to some main factors influencing Sri Lanka actual situation. One is its political instability, the President Maithripala Sirisena – elected in 2015 – recently turned the country into a Constitutional feud. On October 26th 2018, Sirisena, in a sudden move, toppled Ranil Wickremesinghe as PM and appointed Mahinda Rajapaksa in that seat after the United People’s Freedom Alliance withdrew from the unity government. Rajapaksa was the former president and main political opponent of Sirisena during the last presidential vote. His victory in the election has been viewed as a surprise, coming to the office through the votes won from the alternative Sinhala-majority rural constituency and the Tamil and Muslim minority groups. Such a minority has been alienated by the Rajapaksa government on post-war reconciliation and growing sectarian violence. Their votes were more anti-Rajapaksa than pro-Sirisena. Why Sirisena sat in power his main opponent? Was he a straw man for the old politician, supposed not to win the presidential election? This is just an assumption, but we have to take it into account, because the political fight wants to spread damages for your opponents at all cost; on the other hand, like some experts said, Sri Lanka politics are “somewhere in between House of Cards, Game of Thrones and Shakespeare’s darkest Roman plays.” Just after the PM swap, media institutions in the country were suppressed in what could be named as a hostile takeover.

Sirisena can show in his agenda an early visit of Pope Francesco (2015) and the will to fight corruption that is a main problem worldwide. However, now, there are more shadows than lights in his political record. Muslims Sri Lanka counts 7.6 percent of its people as Muslims, among a 69 percent majority of Buddhist Sinhala and another minority, 7.1 percent, of Tamil – Hindu – that aspired to secessionism. Tamil Tigers were the fighting branch and were militarily defeated in 2009. In media narrative of past three decades, the Muslim presence was almost unnoticed because of “activism” of Liberation Tigers of Tamil Eelam. National population of 21.5 million was challenged by an extended civil war and Muslims played even a part, supporting government fight, as happened in Indonesia in the past, during the long and bloody “decomunistization” initiative after Sukarno resignation. When it needs Muslims – better if radicals – can help as extreme problem solvers, then they are moved away in a corner, usually well trained, armed and funded. Among them, you can find several declinations from spiritual Sufis to traditional interpretations of Quran but be sure the better pampered by money and authority’s support are often the most radicals, like Deobandi, for instance. Why? It is Simple, because of oil money from Gulf. After 1973, and the Arab oil embargo that filled Saudi Arabia coffers, the ultra-fundamentalist wahhabi sect, which is the official religious interpretation in the Saudi kingdom, began to penetrate Sri Lanka’s Islam community – as it happened all over the Muslim world.

The wahhabis in Sri Lanka act through a movement called Thawheed, or monotheism. They established a lot of madrasses. They hate Sufis because Wahaabi is literalistic and despises spiritualism, philosophy and metaphysics, basically all the features that made great Islam in the past. It is nice to remember that most of Islamic State and Boko Haram members are followers of Wahaabi ideology. During the golden age, when a lot of Western countries looked away for economic interest, Sri Lankan Muslims began to find employment in Saudi Arabia, and many young Sri Lankan Muslims were awarded scholarships by Saudi universities. However, those who completed their studies returned to Sri Lanka and spread the ideology of Wahhabism. Further, to pursue their goal the Wahhabi resorted to violence and intimidation turning eventually in death and destruction. Religious society in several Muslim countries had to face untold hardship and reform of Islam were bogged down; Reformists were jailed, hanged and persecuted, arousing no interest of Western public opinion or governments.

A good example of this attitude is the doom of Sri Lanka’s Sufis All Ceylon Thareekathul Mufliheen founded in the late 1980s by Sheihul Mufliheen M.S.M. Abdullah, known as “Rah,” in the southeastern Sri Lanka village of Maruthamunai. The order maintains branches throughout the island, and claims 15,000 members. Thareekathul Mufliheen opened a Meditation Centre at Kattankudy in 1996. In May 29 of that year, Wahhabi arson reduced to rubble the building. Abdullah (Rah) and the members of the order were targets of shooting and grenade attacks, and other physical aggressions, as well as threats. In October 2004, 500 Wahhabi organized under the title “Jihad” again set the Meditation Centre ablaze, destroying its library, along with homes and businesses owned by Sufis. “Murtad” is the term for “apostate” and ordinary indictment – very common to find in Dabiq Islamic State magazine – used by Jihadi from Tunisia to Indonesia just to kill someone and left him without any right even after his dead. A member of the Sufi order died in Sri Lanka on December 1, 2006 and buried immediately; the day after was exhumed by Wahhabi on the same pretext and laid out on the soil. According to the Wahhabi and their accomplices, “apostates” could not be buried in Kattankudy. United Nations Special envoy on Freedom of Religion or Belief, during a visit in 2008, expressed “regrets that she has not received a reply from the Government of Sri Lanka” regarding the 2006 incidents. She affirmed that “the Government of Sri Lanka has to fulfill its positive obligation to protect the right to freedom of religion or belief of all its citizens… in most of the cases that have been brought to her attention… these obligations have not been satisfactorily fulfilled by the Government.” The 2007 International Religious Freedom Report issued by the U.S. Department of State noted the Wahhabi interference with Thareekathul Mufliheen. It then reported that abuses against the Sufis of Kattankudy have continued, with the Wahhabi Thawheed faction in the forefront of violence.

The list of misbehaving and wrong doing is long, but the outcome is the same: Wahabis are violent by ideology, that has been little to share with Islam. Saudi sins According to the Sri Lanka newspaper The Sunday Times of August 16th, 2009, Muslim Home Guards recruited by the Sri Lankan government to fight the Tamil rebels had deserted with their weapons and joined Thawheed to fulfill its demand for “Jihad” against traditional Muslims. The newspaper described a significant influx of Wahhabi preachers and activists from south India and Saudi Arabia. Riyad Al-Khenene, counselor of the Royal Saudi Embassy in Sri Lanka, denied that official Saudi support was granted to the Wahhabi interlopers, while admitting that “certain wealthy persons… are helping various religious groups in Sri Lanka to put up mosques. However, this has nothing to do with the Government of Saudi Arabia,” Al-Khenene insisted. The problem with Saudi Arabia is simple. We think this is a state like other, with a government which controls most of the activities of their members. It doesn’t work like that. It is a Bedouin monarchy with thousands of royal members fighting each other for power, where institutions are just occupied by a faction with interest often in opposition of official government attitude. Wahaabi foundations can nominate the ministry of Justice and can blackmail a corrupted royal family. Businessmen and militaries establish clan based on economic interest that works like a local cartel of power. You can find a Saudi tycoon funding Islamic State or Boko Haram and high-ranking militaries training them inside a base, maybe without the ministry of Defence even notice. The King is just a broker that has to deal with foreign powers, they prefer not to know too much because Saudis are so functional for oil business and politics. Saudis are useful to contain Iran’s influence in Middle East or to fund radicals in SE Asia trying to stop Chinese’s influence in the area. Riyad is an oil broker, and a way White House can bypass Congress control on government expense, for example. Bedouins of SA buy a huge amount of US built arms without any capacity to use it properly. UK empire heritage teaches to London how to use radicals to topple foe governments.

The Wahhabi, Deobandi, and Mawdudist jihad trends have revealed their ambition to control South Asian Islam through violence in Afghanistan, Pakistan, India, and Bangladesh. In all these countries, traditionalists resist them, without any support from developed countries, UN, EU or civil rights organizations. Cynicism and greed are leading International politics. Sri Lanka was clearly on Jihadi agenda since January 2019 when an “elite unit of Sri Lankan police commandos raided the remote compound near the Wilpattu National Park wildlife sanctuary (…) where a great amount of explosives that were seized, along with 100 detonators, would have destroyed a historical epicenter of Buddhism and Sri Lankan civilization in Anuradhapura. There is the possibility of more explosives being hidden in the area of the compound or throughout Sri Lanka” as already reported from WB. Now USA-China confrontation is shaping the international alliances and regional relations updating the list of “friend or foe,” according to Beijing or Washington’s interest. The difference with cold war situation is remarkable. Now economic and environmental wars are significant as the real fighting wars. Information actually is a mere tool in the hands of big players. Washington is openly in a post hegemonic age so International instability will last and increase.