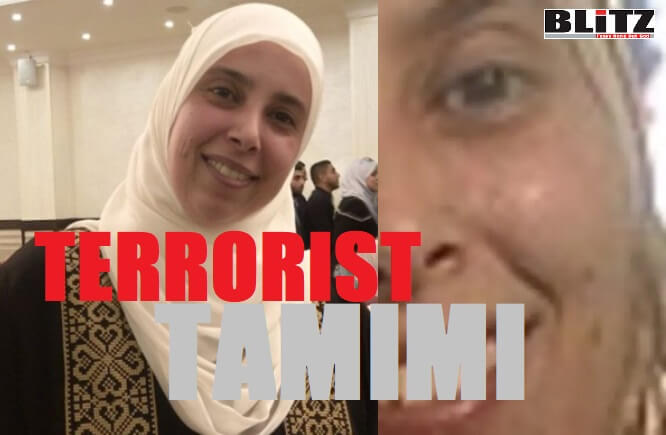 Terrorist Ahlam Tamimi should face trial in the United States

Jordan’s terrorist icon, Ahlam Tamimi, should face justice in the United States, yet the “bitter truth is that everyone in Washington, Jerusalem and Amman knows it’s not likely to happen,” commentator Jonathan Tobin has accurately noted. Tamimi, the infamous mastermind of Jerusalem’s notorious 2001 Sbarro pizzeria Hamas suicide bombing, starkly illuminates the dark realities of the West’s strategic partnerships with Jordan’s Hashemite monarchy.

The suicide bomber guided by Tamimi on August 9, 2001, a mere month before Al Qaeda’s September 11, 2001 attacks on the World Trade Center and Pentagon, killed 15 and wounded 121. The dead included two American citizens, the 15-year-old Malki Roth and the pregnant Judith Greenbaum, while a third American, Chana Nachenberg, a mother, has remained in a vegetative state ever since. In 2003, an Israeli court sentenced the Jordanian citizen Tamimi to what should have been a life behind bars, but a 2011 Israeli-Hamas prisoner exchange freed her, and she went to live in Jordan’s capital, Amman.

Ever since then, Malki’s father, Arnold Roth, has spearheaded an effort to extradite Tamimi to America to stand trial for her American victims. As he himself has acknowledged this May, he has received critical support from the Washington, DC-based Endowment for Middle East Truth (EMET). EMET organized an April 30 letter by seven Republican congressmen to Jordan’s ambassador to the United States, Dina Kawar, calling for Tamimi’s extradition.

As EMET’s accompanying press release noted, Tamimi’s Jordan is, after Israel and Egypt, the third largest annual American aid recipient (currently $1.275 billion). Thus “no one seriously doubts, given the history and the realpolitik, that the US can ensure Jordan hands her over to face trial in Washington,” Roth has written at his excellent website, This Ongoing War. Yet Roth conceded in a recent Times of Israel article that his simple quest for justice involves Jordan’s ruling king, Abdullah II, and therefore “greater issues, of realpolitik, for the adults in the room.”

Analysts such as the Heritage Foundation’s James Jay Carafano have documented how the “keystone” Jordan has an “outsized importance for a small country of limited means.” Abdullah II’s regime is centrally located between Israel, Iraq, Saudi Arabia, and Syria in a Middle East endangered by various jihadist threats, including Iran’s Islamic Republic and the Islamic State (in Iraq and Syria, or ISIS). “For Israel and the West the Hashemite Kingdom of Jordan is a critical piece of real estate,” the American-Israeli political commentator Caroline Glick has observed.

However “Jordan is an economic and social tinderbox,” Glick has stated. “Jordan is one of the poorest states in the Arab world. Only a quarter of its adult population is gainfully employed,” she has noted. Correspondingly, “Jordanians from all ethnicities have lost faith in the Hashemite Kingdom,” whose Bedouin support base is a minority among Jordan’s population, which is 70 percent Palestinian in ancestry.

Jordan’s political environment is toxic for the West, as Glick has noted 2014 Pew surveys in which “100 percent of Jordanians have negative views of Jews” and “85 percent of Jordanians are anti-American.” Unsurprisingly, the “Muslim Brotherhood is the largest political force in Jordan outside the regime,” and the Brotherhood’s Palestinian affiliate Hamas has operated openly in Jordan since the 1990s. Among numerous provocations against Israel, Jordan television stations controlled by the king have broadcast calls to kill all Jews, prompting one Israeli commentator to ask, “[W]ith a friend like Jordan, who needs enemies?”

ISIS has also threatened Jordan from within and without. “ISIS has no shortage of sympathizers in wide swaths of Jordanian society,” Glick has observed. According to statistics, after Russia (3,417) and Saudi Arabia (3,244), Jordan was the third largest contributor of ISIS foreign fighters (3,000), and the largest per capita global contributor.

“If it weren’t for Israel and the Western powers, the Hashemite Kingdom would have been overthrown long ago,” Glick has accordingly assessed. Israel, for example, has subsidized Jordan with favorable water and natural gas deliveries since the two countries formalized peace on October 26, 1994, even though large Jordanian protests regularly demand the abrogation of these deals. Concurrently, in “each passing year, the US provides Jordan with more and more military and civilian aid to keep the regime afloat.”

Jordan under Abdullah II has done much to anger Israel and America under President Donald Trump. Yet Glick has noted that it is “easy to understand Israel’s seemingly masochistic behavior” and that “rather than stand up to Abdullah, the Trump administration gives him a pass for everything.” Although she has suggested promoting Jordanian regime change if Abdullah II refused to extradite Tamimi, Glick has ultimately concluded that, “despite the fact that we could use an alternative to Abdullah, none exist today.”

Roth has recently noted that popular Arab opinion in the media towards Tamimi has validated Glick’s reasoning. “None of the Arabic articles that I can find are even the slightest bit negative towards Tamimi,” the director of the leading Zionist website, Elder of Ziyon, has also stated.  Speaking of Abdullah II, Tobin has determined that

it’s not an exaggeration to say that if his government did the right thing and extradited Tamimi to the United States, it’s possible that the hostility to Israel and Jews in Jordan would cost him his throne.

Given the sensitivity surrounding Tamimi and Jordan, Roth and the Times of Israel have both faced what the latter has described as “variations of a brick wall” in trying to talk with Israeli officials. Meanwhile, Roth has said that he is “getting hints in Washington” that Israeli officials have worked against Tamimi’s extradition. However, only Yaakov Amidror, who headed Israel’s National Security Council at the time of the 2011 Hamas-Israel prisoner exchange, has openly opposed Tamimi’s extradition from Jordan. In his view, “if you say to me, should we help destabilize the regime there in order to bring some despicable terrorist to the United States, I wouldn’t do it.”

While Tamimi is on the FBI’s “Most Wanted Terrorists” list, Abdullah II enjoys international star status, facts that Roth says “deeply embitter” him and his wife Frimet. American politicians have often treated the Roths as “lepers,” even as “Jordan’s king is a frequent honored visitor inside the US Congress (including some of its most important committees) and the White House.” In reverse, Abdullah II’s “palace in Amman is a remarkably popular destination for a stream of elected US officials,” an “ongoing process of US self-debasement” condemned by Roth.

The prestigious Washington Institute for Near East Policy particularly shocked the Roths. It honored Abdullah II with its Scholar-Statesman Award on November 21, 2019 “for his courageous leadership and profound commitment to peace and moderation.” At the New York gala awards dinner, he spoke enthusiastically about his hopes for future Middle East peace and prosperity.

Abdullah II’s relationship with Tamimi proves Glick’s recognition that “America’s alliances in the Arab world are with regimes, not with nations.” While Abdullah II, practically a Western puppet, might bedazzle some with fantasies of a more moderate Middle East, the terrorist Tamimi remains the true queen of Jordanian hearts. The issues surrounding this duo therefore present American policymakers with yet another thorny political quandary, which this series’ concluding article will explore.