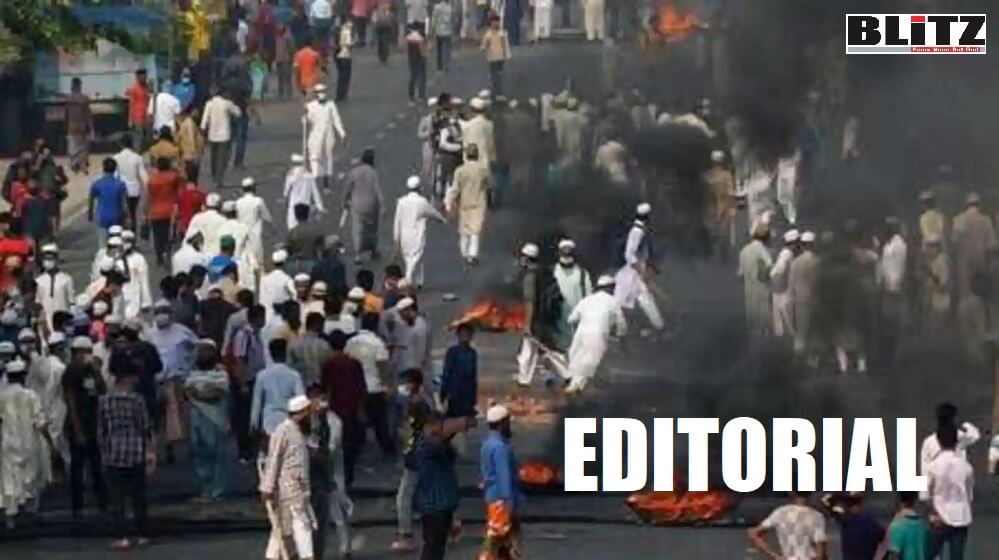 Anti democracy and terrorist acts of pro-Caliphate Hefazat-e-Islam has finally drawn the attention of the key policymakers in the US and other western nations. According to information, counterterrorism organizations of the US government are already scrutinizing terrorist activities of Hefazat-e-Islam and its activities against democratic institutions. It may be mentioned here that, Hefazat-e-Islam is already known as anti-US, anti-India, and anti-West group with notorious anti non-Muslim agenda. In several public gatherings in Bangladesh, Hefazat activists were seen publicly calling for waging jihad against non-Muslims [particularly Hindus]. Hefazat-e-Islam leaders have also openly declared solidarity with Islamic State, Al Qaeda, Hizbul Mujahideen, as well as Pakistan-funded militancy groups in Jammu and Kashmir.

Following the recent Bangladesh visit of Indian Prime Minister Narendra Modi to join the golden jubilee celebration of independence as well as the birth centenary of Bangabandhu Sheikh Mujibur Rahman, pro-Caliphate Hefazat-e-Islam and several radical Islamic groups and individuals resorted to giving incitements of jihad and beheading of “non-Muslims”, while several YouTube channels are openly publicizing such extremely disturbing contents, which would have dangerous impact on the Muslims in Bangladesh. Despite repeated reports published in Blitz exposing notorious activities of Hefazat-e-Islam and its cohorts such as Bangladesh Nationalist Party (BNP), Jamaat-e-Islami, Hizbut Tahrir and other militancy outfits and individuals loyal to such jihadist ideology, law enforcement and intelligence agencies in the country are yet to take visible actions against these culprits. Continuation of extremely provocative pro-jihadist YouTube channels would not only play role in giving instigations to mass people, particularly those uneducated and half-educated populaces of the country, it also would pose gravest threat to security of Bangladesh, the region and the world.

US asked to designate Hefazat-e-Islam as terrorist entity

Following reports and commentaries published in Blitz, several organizations of Bangladeshi freedom fighters living in the US have urged Secretary of State Antony Blinken to designate pro-Caliphate Hefazat-e-Islam as a terrorist organization.

Nuran Nabi, president of USA Bangabandhu Parishad said, they sent copies of the memorandum to the Department of Homeland Security and the foreign affairs committee of the US Congress in the wake of series of violence over years.

“The Islamic outfit claims itself to be a non-political Islamic Advocacy group. But its ideology and activities are reminiscent of those of the Taliban and ISIL,” the memorandum said.

It continued: A review of its charter 13-point demand and its history of violence against women, minorities, and cultural and historical sites would show that Hefazat has been emulating the Taliban’s success while exploiting the fractious political environment to turn Bangladesh into a monolithic Islamic theology.

To illustrate few violent activities of Hefazat-e-Islam, let us start with the most recent spate of violence on the eve of the 50th anniversary of Bangladesh’s Independence. On March 26, 2021, Hefazat-e-Islam went on a country-wide rampage during its protest against Indian Prime Minister Narendra Modi’s visit.

Only a few days ago, on March 17, 2021, hundreds of supporters of Mamunul Haque, the Joint Secretary of Hefazat-e-Islam, attacked, burnt, and destroyed about 70-80 Hindus houses in Shalla Upazila of Sunamganj district in the Sylhet division. The Hefazatis perpetrated the violence on the pretext that one Hindu youth from that village earlier had posted derogatory remarks in social media about Mamunul Haque.

On November 13, 2020, in a public gathering, Mamunul Haque demanded that the proposed installation of the statue of Sheikh Mujibur Rahman, the founding father of Bangladesh, be stopped as the statue being against the value of Islam. He threatened that any installed statue would be dug out and thrown into the river.

Following his threat, the Hefazat activities started defacing the historical statues and monuments across the country. One such defaced statue was Bagha Jatin’s, an Indian freedom activist who had fought against the British occupation of the Indian Subcontinent and later died.

Hefazat’s hatred against cultural and historical artifacts is very similar to those of the Taliban and ISIL. For instance, same as the Taliban, which destroyed 1600 years old Buddhas of Bamiyan, and the ISIL, which destroyed 2100 years old Temple of Bel in Palmyra and other thousands of years of other archeological sites, Hefazat-e-Islam has constantly been threatening to demolish public displays of statues.

They were successful in forcing the Bangladesh government to remove the statue of the ‘Lady Justice’ from the Supreme court premise in 2017.”

“Like Taliban and ISIL, Hefazat-e-Islam is also vehemently opposed to the rights of women, minorities, and the freedom of speech. All these oppositions are clearly manifested in Hefazat’s charter of 13-point demand, which was crafted as a retaliation to the ‘National Women Development Policy 2011’ (NWDP).

The review of Hefazat’s charter of 13-point demand would indicate that Hefazat demands the scrapping of the NWDP and the restriction of freedom of speech and liberties.

On April 6, 2013, Nadia Sharmeen, along with few other journalists, was brutally attacked and severely beaten up by the activities of Hefazat-e-Islam while reporting on the outfit’s agitation program demanding the implementation of 13-point demand. Ms. Sharmeen had survived the attack and was later honored with the 2015 U.S. Secretary of State’s International Women of Courage Award.

The partners of the Hefazat include leaders of the radical Islamic outfits, who had organized massive protests in the 90s forcing Writer Taslima Nasreen into exile and have frequently demanded that Ahmadiyas Muslims be declared non-Muslims.

As it appears from its 13-point demand, violence against women, minorities, and cultural and historical sites, Hefazat has been emulating the Taliban’s success and exploiting the fractious political environment to turn Bangladesh into a monolithic Islamic theology which is worrisome.

Hefazat-e-Islam is engaged in the war of attrition. Its current strategy seems to destabilize the Bangladesh government by resorting to surprise violence, going into hiding temporarily, and then reappearing with more severe violence.

Unless stopped, Hefazat would undoubtedly appear as an anti-freedom monolithic terrorist organization like ISIL and Taliban, eventually destabilizing entire South Asia and posing a new national security threat for the United States.

Under the above circumstances, we urge you to take necessary actions as soon as possible to safe guard the national security threat for the United States of America.

Counterterrorism experts said, it was a blunder giving Qawmi madrassa’s Daora-e-Hadith degree the equivalent status of Masters degree and letting the madrassa-educated radicalized teachers and students enter the civil and military administration. Considering the recent terrorist acts of Hefazat-e-Islam and its ambition of emerging as political party, it is essential for Bangladesh government to revoke the recognition.

They said, pro-Caliphate Hefazat-e-Islam and the madrassa educated students and teachers do not believe in democracy. Instead they believe in establishing Caliphate. For this particular reason, letting madrassa educated individuals enter civil and military administration would help Hefazat and similar radical Islamic groups in expanding influence and network in the country.

In my continuous research on the rise and activities of radical Islam in Bangladesh, contents of an YouTube channel named ‘Alif TV Official” has come to my attention, where a speaker named Waseq Billah Nomani, along with hundreds of similar contents on that channel drew my attention.

In the video content, Waseq Billah Nomani, who is mentioned as a “neo-Muslim” or a Hindu who got converted into Islam saying, he has 22-years’ experience on chopping heads and wants to chop the head of Indian Prime Minister Narendra Modi, if  he [Nomani] would find the Indian premier. He even went further saying, he would continue chopping heads of Hindus. And, most surprisingly, such notorious statements were made publicly in an Islamic program.

Radical mullah Waseq Billah Nomani went further by pronouncing support for the killers of blogger Abhijit Roy stating, those who insult the Prophet should be killed. He also said, those killers of Abhijit Roy deserve our salute. A desperate Waseq did not hesitate in expressing solidarity with the jihadists of Ansarullah Bangla Team (ABT).

In presence of hundreds of people, a radical mullah Waseq Billah Nomani displays a sword stating non-Muslims deserve to be chopped. He even pronounced jihad against the “enemies of Prophet” and went further by pronouncing jihad against the Bangladesh government. It may be mentioned here that, under the dynamic and magnanimous leadership of Prime Minister Sheikh Hasina, law enforcement and intelligence agencies such as Bangladesh Police, Rapid Action Battalion (RAB), Counter Terrorism and Transnational Crime (CTTC) unit, the Directorate General of Forces Intelligence (DGFI), the National Security Intelligence (NSI) and other organs of Bangladesh government are working tirelessly in combating militancy and terrorism and already shown remarkable success in destroying networks of militancy and terrorist groups in the country.

As we know, notorious jihadist outfits such as Al Qaeda, Islamic State (ISIS) etcetera are simultaneously running two jihadist fronts – military front and cyber front. According to counterterrorism experts, in this age of advancement of communication technology and availability of several communication apps alongside social media and video sharing sites, cyber jihad is already becoming much tougher front as it can easily penetrate within households, mostly without being untracked by the law enforcement and intelligence agencies. For Bangladesh government, it is essential to pay special emphasis in taking appropriate measures along with necessary technological capabilities to combat the growth of jihadist platforms on social media, video sharing sites and other platforms. In case of necessity, Bangladesh can officially notify YouTube authorities requesting them to immediately remove those jihadist channels. At the same time, Bangladesh missions in the US and European nations can officially file complaints with their counterpart about existence of such jihadist platforms on YouTube, Facebook and other platforms.

Cases being filed against Hefazat men

Law enforcement agencies have started filing cases and arresting culprits for on charges of violence, vandalism, theft and criminal activities of Hefazat-e-Islam men following Mamunul Haque’s getting caught with a woman during his secret sexual rendezvous. So far, seven cases have been filed over the April 3 incident, while Mamunul Haque has been named among the accused in three cases. Few more cases are under process.

Earlier, several cases were filed against the members of Hefazat-e-Islam and its cohorts – Jamaat-e-Islami, Bangladesh Nationalist Party, Hizbut Tahrir, Neo-JMB and other militancy outfits in Bangladesh on allegations of terrorist activities centering visit of Indian Prime Minister Narendra Modi. It was reported in the media that, Hefazat and others were getting fund from Qatar and Pakistan.

Policymakers in the US and the western nations should immediately designate Hefazat-e-Islam as a terrorist group, failing which, this monstrous jihadist outfit would emerge as another Al Qaeda and Islamic State.