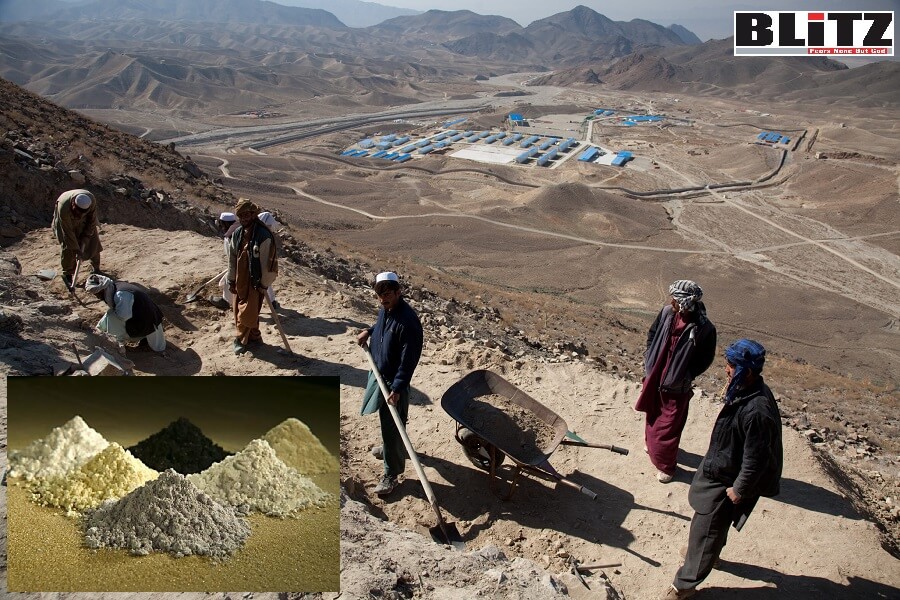 While everyone in the world would say, Afghanistan is one of the world’s poorer countries, the fact is just the opposite. None of the so-called friendly nations of Afghanistan, including Pakistan and the United States had ever told the Afghans about the country’s mineral wealth worth billions of dollars. In fact, exploration of these mineral resources would turn Afghanistan into one of the wealthiest nations in the region. According to media reports, Afghanistan is rich in resources like copper, gold, oil, natural gas, uranium, bauxite, coal, iron ore, rare earths, lithium, chromium, lead, zinc, gemstones, talc, Sulphur, travertine, gypsum and marble.

A 2019 report by Afghanistan’s Ministry of Mines and Petroleum put the country’s copper resource at almost 30 million tons. But experts said, the actual volume of copper resource is at least 3-times more than what was shown in the 2019 report. This giant asset is still to be developed but the 30 million tons of copper would be worth over US$300 billion at current London Metal Exchange prices.

Other metals the 2019 report also said Afghanistan had more than 2.2 billion tons of steelmaking raw material iron ore, worth over US$350 billion at current market prices.

Gold resources were much more modest at an estimated 2,700 kg, worth almost US$170 million, while the Afghan ministry also said base metals aluminum, tin, lead and zinc were “located in multiple areas of the country”.

Here again, the exact volume of gold resources either was not accurately measured or been suppressed. Afghanistan actually has gold resources of minimum 100 tons.

It is also reported in the media that there was total reserve of 60 million tons of copper in Afghanistan worth hundreds of billions of dollars at current prices as demand for the metal grows.

An internal US Department of Defense memo in 2010 reportedly described Afghanistan as ‘the Saudi Arabia of lithium’, meaning it could be as crucial for global supply of the battery metal as the Middle Eastern country is for crude oil.

The comparison was made at a time lithium was already widely used in batteries for electronics devices but before it had become apparent how much lithium would be needed for electric vehicle (EV) batteries and the world’s low-carbon transition.

A 2017-18 report from the US Geological Survey notes Afghanistan has deposits of spodumene, a lithium-bearing mineral, but does not provide tonnage estimates, while the 2019 Afghan report makes no mention of lithium at all.

Here again, it is proved, Afghan authorities and their foreign allies have been systematically hiding country’s mineral wealth, which is suspicious enough.

The 2019 mines ministry report does, however, say Afghanistan holds 1.4 million tons of rare earth minerals, a group of 17 elements prized for their applications in consumer electronics, as well as in military equipment.

That’s according to the 2019 Afghan report, which cited a joint US-Afghan assessment, and implies a value of US$107 billion for the crude oil alone at current market prices.

Afghanistan has historically been a major source of lapis lazuli, a deep blue, semi-precious stone that has been mined in the country’s northern Badakhshan province for thousands of years, as well as other gemstones such as rubies and emeralds.

The finest grades of lapis lazuli can fetch up to US$150 per carat, according to the 2019 Afghan report, which notes, however, that the majority of gemstones mined in the country leave the country illegally, mostly to Peshawar in Pakistan, denying Afghanistan vital revenue.

Afghanistan can emerge as one of the wealthiest nations in the region once it can have its own government formed by patriots – not any puppet or jihadist regime. Afghans need to remember, none of the foreign nations will help them in changing their fate as all of those nations would only loot the wealth of Afghanistan with the help from the puppet or jihadist regime.

Unfortunately, now Afghanistan has once again slipped into the grips of the Taliban, to date, the Taliban have profited from the opium and heroin trade. Now the militant group effectively rules a country with valuable resources. According to media reports, The Taliban have been handed a huge financial and geopolitical edge in relations with the world’s biggest powers as the militant group seizes control of Afghanistan for a second time.

While the West has threatened not to work with the Taliban after it effectively seized control of Kabul over the weekend, China, Russia and Pakistan and also Turkey and Iran are lining up to do business with the militant group — further adding to the US and Europe’s humiliation over the fall of the country.

According to experts, China, being already Afghanistan’s largest foreign investor — is seen as likely to lead the race to help the country build an efficient mining system to meet its insatiable needs for minerals. Chinese cooperation in mining sector can effectively help in changing the economic status of Afghanistan and liberate the country from current poverty.

Afghanistan can also benefit from China’s massive Belt and Road Initiative (BRI), an infrastructure plan to build road, rail and sea routes through Asia to Europe and African continent.

Afghans truly can see a prosperous and wealthy Afghanistan just within next 10-15 years, if they can unitedly play effective role in saving the country from the clutches of puppet and jihadist regimes.

God bless Afghanistan and its people.

Like Loading...
Recommended for you:
Continue Reading
Advertisement
You may also like...
Related Topics:Afghanistan, Copper, Gemstone, Ministry of Mines and Petroleum, Pakistan, US Department of Defense