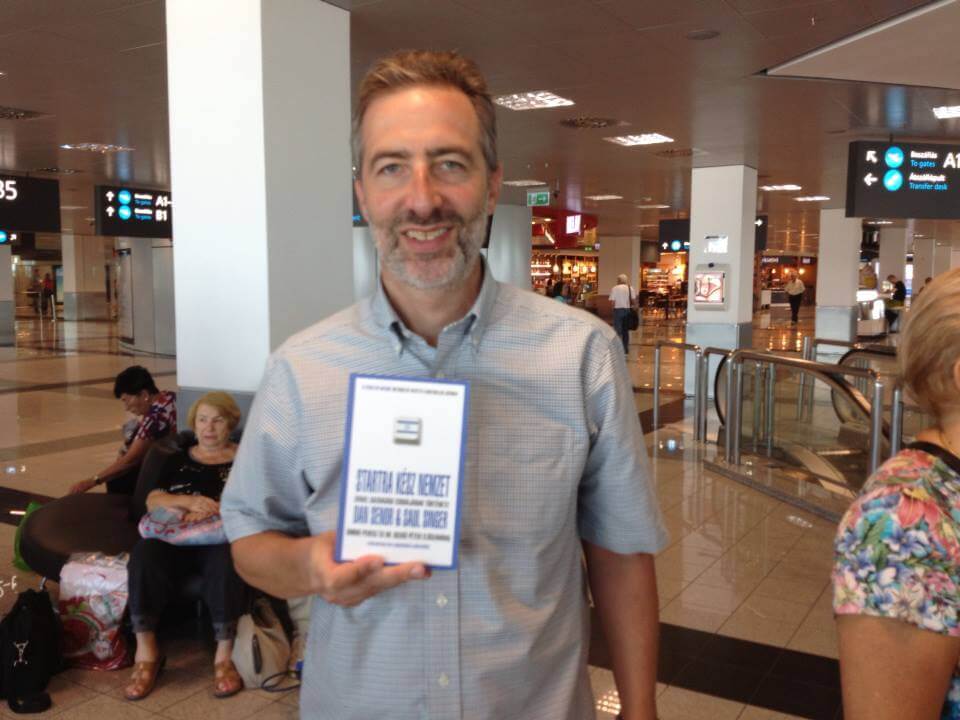 “The two real fathers of Israeli hi-tech are the Arab boycott and Charles De Gaulle, because they forced on us the need to go and develop an industry.” — Yossi Vardi, owner of dozens of Israeli startups.

“Start-up Nation” is the story of Israel that you generally don’t hear about unless you are part of it. Israel is known for its religious history, its archaeology and its uncanny military prowess in the face of implacable enemies bent on destroying it. Most people still don’t even understand that Israel is only about the size of New Jersey, and yet, it continues to raise its aura in all matters earthly, intellectually, and now in business.

Published in 2009, by “Twelve,” a subgroup of Hachette Books in New York City, its authors, Dan Senor and Saul Singer attempt to answer the question, how was Israel able to become the number one per capita start up nation in the world?

“How can Israel—with only 7.1 million people, (its population at the time of publication) no natural resources, enemies on every border, and in a constant state of war—produce more start-up companies than Japan, India, Korea, Canada, or the United Kingdom?”

After dispelling the antiquated and somewhat chair squirming, dismissive, and slightly anti-Semitic notion that “Jews are just smart” they surround their thesis in Israel’s history and other factors not the least of which how it conducts its military, the soldiers who participate and then enter college and then into industry taking their knowledge of military experience with them. This in turn provides for a business climate of innovation and dedication that cannot be surpassed. The success of Israel’s army is literally taken from the battlefield to the business world.

For example, Israeli scientists took the “electro optical device” that controls rockets to hit their precise targets and built a similar, but much smaller camera and placed it in a pill and when taken by a patient can transmit images looking for all kinds of anomalies inside the human body.

There is another startup on an implantable bioreactor developed from military related projects which would replace a defective pancreas in diabetes patients. Complete with the needed oxygen to distribute beta cells in these patients to produce insulin. This invention greatly simplifies the treatment of this disease. It’s planted under the skin in a fifteen minute outpatient office procedure and replaced once a year.

There are dozens of these examples throughout the book.

In a tail wagging the dog scenario these innovations have had a remarkable influence on the Israeli government. Now realizing its potential, casting off the limits of socialist asphyxiation has given carte blanche to this new idea of free enterprise and business acumen, further freeing the nation to innovate and invent.

From the beginning almost to 1948 Israel showed its sense of high tech adventure with the creation of Israel Aircraft Industries in the 1950s, Simcha Blass’s invention of drip irrigation in the 1960s, and Intel’s confidence in opening a subdivision in Israel in the 1970s which has proven today to be the biggest subsidiary of Intel in the world second only to the headquarters in Santa Clara, California.

But the real explosion of Israel technology happened in the early 1990s with the technology boom. Venture capital set about through several innovative methods allowing Israeli companies to begin their start-up revolution. Even though Israel already had Intel and some other international successful high tech ventures, it was really these seeds of venture capital ideas that opened up Israel to a magnificent economic rise. Erel Margalit, one of Israel’s top managers of Israeli startups said about the era, “ Venture capital was the match that sparked the fire.”

Until 2005 venture capital could only be utilized from foreign countries. With the founding of “Yozma” another innovative solution come up by finance ministry bureaucrats gave new impetus into Israel funding its own ventures partnering with other nations, rather than depending totally on them, the United States, France, China, Germany, etc.

What has been created in Israel in the last two decades might be the single most active business cauldron in modern history.

Bibi Netanyahu as Finance Minister under Ariel Sharon in 2005 changed the face of the non hi tech investment world with reforming Israel’s finance laws. He “cut tax rates, transfer payments, public employee wages and four thousand government jobs.” At first this promoted labor strikes, but soon the nation began to pull out of its rut by shifting the government sponsor of lending money, one of the last socialist programs still stifling Israel’s economy, to the private sector which opened up whole new industries for Israel to engage in.

Since this review is written seven years after publication and the advancement in both Israel’s high tech and now finance industry, it can only be assumed that what was written then is now obsolete. Israel has gone way beyond that now and has established itself as a world leader with these innovations. Other countries considered more advanced than them up to that time are now trying to emulate Israel’s methodology in start-up capacity.

Although this book shows a different and refreshing side of the Jewish State and is an excellent read, it is not without criticism.

For example, there is a difference between the audible version, narrated by Sean Pratt, and the written version. I read both. Sometimes in the audible it’s a slightly different wording. This is okay except sometimes it happens in quotes. For example, in the quotes in chapter 12 of the soft cover 2010 version, all the quotes attributed to Tal Keinen in the written form are mentioned in the audible book as Yuval Dotan. I’m not sure if this was an editorial mistake or just an oversight and corrected later for the audible version but a few of these mistakes exist in the manuscript. Quotes should be attended to more accurately. I haven’t checked later written editions to see if the corrections or disclaimers have been made.

Another problem is that citations are well documented throughout the book, but I was disappointed in that the book is dotted with certain assertions that carry no such citations. For example, on page 214 of the soft cover 2010 edition it says about education in the Arab world and the fact that there are far more qualified women teachers teaching girls than men teachers, teaching boys and this has led to “a gender gap in student performance among the most extreme in the world.” There should be a citation for this and not left to take the authors’ word for it.

But, even with these problems the book is a must read if you want to understand all facets that make Israel go. It’s entrepreneurial spirit is one of the factors why Israel has not only survived but thrived in a hostile environment.

The story of Israel’s climb from relative business obscurity to being one of the top countries with more successful businesses on all the world’s largest stock exchanges than any other nation is as engaging as any Israeli story about survival, military exploits, or ancient discoveries. It is just simply an amazing read.

If you want to know more about Israel than just its politics I suggest you read this book. You will find an Israel which in the future can guide the world to further and further advancements, in computer, and biotechnology, medical devices, movie making, animation and social media technology etc. The list is endless. Do a search on the internet for Israeli inventions and innovations and you will see what I am talking about.

Is this what is meant by the talmudic command Tikkun Olam? (to spread goodness throughout the world). It just might be.