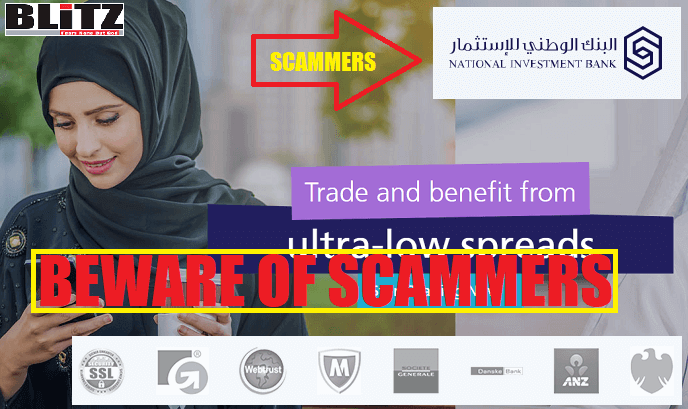 An attempt of massive bank fraud was successfully busted by the Central Bank of Bahrain (CBB) on June 18, 2019. In a circular letter,CBB warned the public against dealing with a so-called financial institution, which is accused of fraud. The financial institution named ‘National Investment Bank’ has been mainly targeting the residents of the Kingdom. Despite having no license issued by the CBB to operate as a financial institution, it has been undertaking trading services, depositing certificate of shares and market information services.

According to Bahrain’s largest newspaper the Daily Tribune, the phone number listed by National Investment Bank was found to be out of service.

On the website of this fraudulent company, it said:

On the 19th of March 2007, the Council of Ministers approved the formation of The National Investment Bank. This was in accordance with Article-20 of the Capital Market Law establishing National Investment Bank as a joint stock company. Islamic National Investment Bank is the sole entity authorized in the Kingdom of Saudi Arabia to act as the Securities Exchange (the Exchange). It mainly carries out listing and trading in securities, as well as deposit, transfer, clearing, settlement, and registry of ownership of securities traded on the Exchange. The legal status, duties, and responsibilities of the Exchange and Depository Center are explicitly defined in the Capital Market Law (CML) issued by Royal Decree Number (M/30), dated on June 16, 2003. The Exchange is also the official source of all market information.

No physical address of NIB

The so-called National Investment Bank (NIB) does not have any office address and after reviewing its website, out investigative reporters opined, it is just another attempt of scammers who want to swindle money from the people by fooling them.

The example of National Investment Bank is just one out of hundreds of such fraudulent entities in the world.

Recently Blitz investigative team has identified a large number of so-called suppliers of edible oil, butter, ghee etc., who are claiming to be legitimate companies. Once anyone would contact those companies, they are declining dealings against Letter of Credit. Instead they are asking cash payment in advance, which clearly shows the ulterior motive of these fraud racket.

Here are list of few of the fraudulent entities from Ukraine and other countries:

In the website of this company, there is a notice from Gavrenkova Viktoria, CEO stating:

Kaissa Oil has become a victim of fraudsters. We have become aware of the illegal use of our trademark, name and logos of our company. When drawing up commercial offers, letters or contracts for the supply of sunflower oil, fraudsters use symbols similar to the corporate symbols of the Kaissa group.
The actions of such organizations are fraudulent and are aimed at receiving an advance payment without a rther shipment of sunflower oil.

Fraudsters, posing as representatives of the Kaissa , using the email [email protected] and the website https://kaisaoil.com (using one letter “S” instead of doubled), offer sunflower oil supplies to our partners, using contact details which do not belong to us. They also offer to make prepayment to the accounts of fraudsters.

Kaissa Oil uses only “[email protected]” and the website https://kaissaoil.com/ in its activities and communication (please note that the name of our company uses doubled letters “S” in our title).
We would like to pay your attention to the fact that the Kaissa Oil includes the following industrial complexes: Oil processing plant, Refining and deodorizing plant “VVVV” LLC and oil bottling factory “SUN LIGHT” LLC.
Kaissa Oil has no representative offices outside Ukraine.

This company claims to be a well-known exporter and supplier of edible oil from Ukraine. But whenever any buyer is contacting them, they are asking for payment in advance and declining to accept letter of credit established by internationally acclaimed banks, which clearly proves their ulterior motives.

This is another fraudulent company from Ukraine trying to swindle money from customers of edible oil from around the world.

Golden Sun asks for 30 percent payment in advance and remaining 70 percent through letter of credit, meaning they would simply swindle the amount people would send as advance payment.

On its website, it says, “Macjerry Sunfloweroil is a Ukrainian full-service export supplier of high-quality vegetable oils and fats. Within the many years of our existence, we have build good relations with our customers and supporting them by being flexible, fast and accurate in the planning.  Over the years we increased the range of the offered products, and nowadays we export to more than 40 countries throughout the world”.

But, once any customer will contact, it too would ask for either 30 percent or 100 percent in advance.

On its website, it says “Welcome to the website of GOLDSUN LTD a privately owned business, with mission to bring high quality pulses for consumers in partnership with world’s most successful and sophisticated retailers, wholesalers, importers, packagers, canners, brokers & growers”.

But again, this is just another scam trap of the Ukrainian scammers.

According to experts on international trade, doing business with Ukraine is extremely risky. Considering this factor, it is better to refrain from any business dealings with Ukraine, unless there really is any legitimate company.