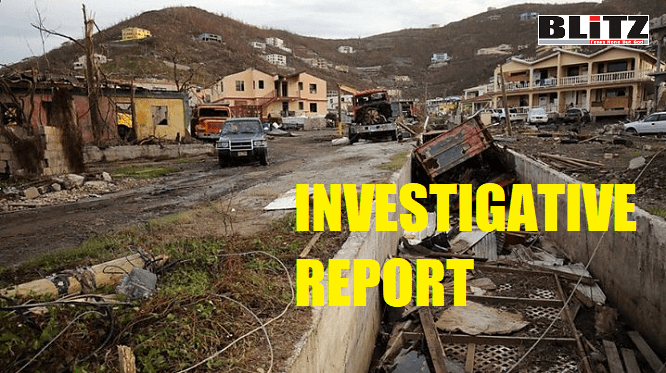 Dominica, an island country in the Caribbean has grabbed news headlines in recent years because of hundreds of foreign nationals ever-increasing interest in buying citizenship in exchange for just one hundred thousand dollars. But, selling of citizenship is not the only source of earnings for the politicians and officials in Dominica, they also are engaged in selling diplomatic passports and even appointing foreign nationals as Dominica’s envoys in a number of countries, where this tiny island even has no presence. Our team of investigative reporters are working on finding information centering corruption and numerous forms of crimes that have been taking place in Dominica. This episode is about wasting money by buying Dominica’s citizenship.

Hurricane Maria made landfall on the southwest coast of Dominica at 9:35 pm on 18 September as a Category 5 hurricane, with 160 mph wind speed and higher gusts. The hurricane-force resulted in intense storm surges, torrential downpour, overflowing raging rivers, and extremely high winds across the island left 31 people dead, 37 missing. 65,000 people, around 80% of the population, were directly affected and more than 90% of roofs were damaged or destroyed while power and water supplies were disrupted, and entire crops destroyed.

Four months after the hurricane, although the situation was normalizing, Dominica remained seriously impacted. Around 450 people still reside in collective shelters. Over 80% of houses still have inadequate roofing, about 15% of children have not yet returned to school, 90% of the population does not have electricity, and a sizeable portion of the population is highly vulnerable after losing their main source of livelihood (OCHA 20/12/2017).

Dominica’s Prime Minister Roosevelt Skerrit had already told the United Nations that his country is exposed to thousands of storms and hurricanes, meaning, any investment in that island country is extremely risky.

In 2008, Dominica had one of the lowest per capita gross domestic product (GDP) rates of Eastern Caribbean states the country nearly had a financial crisis in 2003 and 2004, but Dominica’s economy grew by 3.5 percent in 2005 and 4.0 percent in 2006, following a decade of poor performance. Growth in 2006 was attributed to gains in tourism, construction, offshore and other services, and some sub-sectors of the banana industry. Around this time the International Monetary Fund (IMF) praised the Government of Dominica for its successful macroeconomic reforms but also pointed out remaining challenges, including the need for further reductions in public debt, increased financial sector regulation, and market diversification.

Agriculture and especially bananas once dominated Dominica’s economy, and nearly one-third of the labor force worked in agriculture in the early 2000s. This sector, however, is highly vulnerable to weather conditions and to external events affecting commodity prices. In 2007, Hurricane Dean caused significant damage to the agricultural sector as well as the country’s infrastructure, especially roads.

In response to reduced European Union (EU) trade preferences for bananas from the former European colonies after the 2009 WTO decision, the government has diversified the agricultural sector by promoting the production of coffee, patchouli, aloe vera, cut flowers, and exotic fruits such as mango, guava and papaya, while the economy has become increasingly dependent on tourism.

No international airport in Dominica

There are two regional airports on the island, but no international airports. Therefore, flying to Dominica requires traveling through San Juan, Puerto Rico or other nearby islands in the Caribbean such as Martinique, Guadeloupe, or Barbados. The primary airport, Douglas-Charles Airport (DOM), is on the northeast coast and is about a 45-minute drive from Portsmouth (1 hour from Roseau). The second is Canefield Airport (DCF), about 15 minutes from Roseau on the southwest coast.

Douglas-Charles Airport is suitable for the limited use of commercial jets because of runway length. Douglas-Charles currently has regular service by Air Sunshine, Winair, and Seaborne Airlines using twin turboprop aircraft like the ATR and Saab 340, which, using Boeing 727 Freighters, is the only airline with jet service to the republic. A runway extension and service upgrade project began at Douglas-Charles Airport around 2006 and was finished in 2010. In March 2013, airline American Eagle halted flights to the island citing high labor costs.