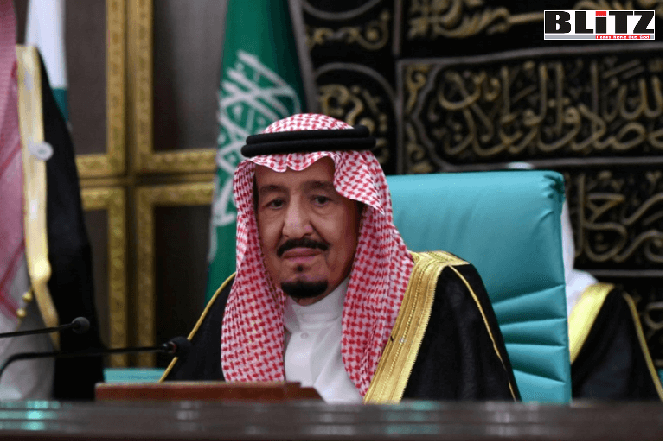 Approving the budget, King Salman said that the spending in the budget is SR990 billion, and the revenues are expected to be at SR849 billion, with an estimated deficit of SR141 billion, representing 4.9 percent of the GDP.

King Salman also said that the world has experienced an unprecedented pandemic that negatively impacted the world economy. Defying the odds, we have directed to provide free treatment to all those who contracted the coronavirus — citizens, residents, and illegal over-stayers — at all public as well as private health facilities. Moreover, a Cabinet decision has recently been taken to grant SR500,000 to the family of all front-line workers who lost their lives in the fight against coronavirus.

This was a tough year in history. However, the timely intervention in terms of health measures, financial and economic initiatives, and the reforms as part of the Kingdom’s Vision 2030, has altogether resulted in curbing the negative impacts on citizens and residents in the Kingdom and on our economy, he said while lauding the cooperation of citizens and residents for their positive role in confronting the pandemic and bearing its burdens.

Then, the Custodian of the Two Holy Mosques signed the royal decree on the budget.

In a statement to Saudi Press Agency (SPA), Acting Minister of Media, Dr. Majid Al-Qasabi pointed out that the Cabinet reviewed the statement of the Ministry of Finance and the financial results contained therein for the current fiscal year 1441/1442 H.

The statement included the main features of the general budget for the new fiscal year 1442 1443 H (2021), which comes to emphasize the provision of all means to deal with COVID-19, restore the pace of economic growth, strengthen the system of support, social benefits, and basic services, and adopt more appropriate policies in the balance between growth, economic stability and financial sustainability in the medium and long terms, while continuing efforts to develop non-oil revenues, spending efficiency and increasing the level of private sector participation, in light of the exceptional economic conditions for the fiscal year 2020 and the uncertainty associated with the crisis and its consequences that the global economy is still suffering from its effects.

The statement of the Ministry of Finance showed that the real oil output declined during the first half of 2020 at a rate of 3.3 percent, which is less than the local and international expectations for the Kingdom’s economy and is the least declining compared to other countries, especially the G20 countries, as a result of the positive effects of the effective measures taken by the government to address the health, financial and economic crisis.

The statement stressed the Kingdom’s keenness through its leadership role in OPEC in coordination with OPEC + countries to restore stability of oil markets, and through its presidency of the G20 by working to strengthen international coordination to adopt the necessary policies to support global economic growth and mitigate the least developed countries to deal with the crisis, these efforts succeeded significantly in alleviating the severity of the crisis on the global economy.

The statement reported that the preliminary estimates of the Year 2021 indicate a growth of the Real Gross Domestic Product (GDP) of about 3.2 percent, driven by an assumption of the continuance of economic activates’ recovery during the year, with an expectation of the public debt reaching about SR854 billion or a 34.3 percent of the GDP, by the end of the current year, to reach SR937 billion or 32.7 percent of the GDP by the end of the Fiscal Year 2021, reaching about SR1026 billion, in the Year 2023 or 31.7 percent, which are the levels that stand short of the set ceiling for the public debt at 50 percent of the GDP and with emphasis that the Ministry of Finance shall keep working through the National Center for Managing the Public Debt to provide the financing needs in accordance with the fiscal policy objectives and the public debt strategy.

The statement included the government reserves balance according to the statement of the Fiscal Year 2020 and that it shall be preserved at SR346 billion and that it shall be kept at the level of SR280 billion for the Year 2021 and SR265 billion for the Year 2023, while what has been earmarked for the general items in the 2020 budget that stood at about SR151 billion, SR186 for education, SR175 for health and social development.

The Ministry of Finance’s statement has underscored that the fiscal policies shall continue to pinpoint the priorities of expenditure, and those of maximum economic return and work on strategies that would consolidate government spending stability to mitigate its exposure to the oil-related revenues performance and that the endeavors of the government to indigenize various sectors and carry out new projects, in miscellaneous sectors to increasingly create job opportunities for the citizens, in addition to the continuity of the economic diversification process, backing up of promising economic sectors such as tourism, sports and etc., as these sectors may provide much more job opportunities.