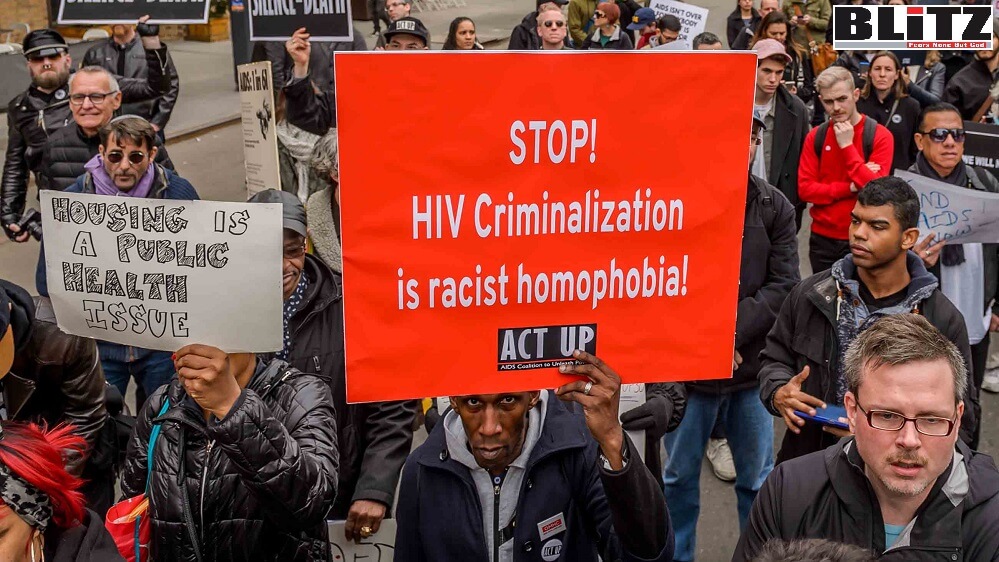 Scientific evidence proves that criminalization is a direct threat to the HIV response. Countries with progressive laws and human rights protection in place are doing much better in tackling the HIV epidemic, while countries that criminalize same sex relationship, sex work and drug use, have more people with undiagnosed HIV and lower rates of viral suppression. All communities should benefit from the results of science, else public health value of these scientific advancements will be very limited”. Writes Shobha Shukla

Recent scientific advancements have brought to the fore the promise of more effective and long-term solutions to help people living with HIV to thrive and not just survive. Today we have a buffet of HIV prevention options (such as, oral daily PrEP, once-a-month vaginal dapivirine ring for women, 2-monthly long-acting injectable) along with a bouquet of improved treatment modalities (monthly and 2-monthly long-acting injectables) adorning the HIV/AIDS arena, thanks to the untiring efforts of the scientific community. Many others are in the pipeline in different stages of research and development.

There is understandably a lot of excitement around these new products. But where are the recipients who have been waiting patiently for years to partake of this relatively lavish spread? Is it restricted to the favoured few residing in the global North or ‘haves’ in the global South? Do the majority of people who need these products have to stand in the waiting line indeterminately to access them? Are socio-economic, cultural, other structural barriers or social-commercial determinants impeding access of most-in-need people and communities to these new products and services?

Scientific interventions alone will not help unless they are made accessible to those living with HIV or are at risk of it. Moving effective treatment and prevention tools fast enough to the people who need them most is crucial if countries are serious about ending AIDS by 2030.

We know that it took a lot of time initially for antiretroviral therapy to become accessible and affordable for the people living with HIV, especially in the global South – thanks to the untiring community-led stewardship of global but grounds-up campaign to improve access to lifesaving medicines for all. But even in the present times, it seems that the nationality, race, and socioeconomic status of a person, determine whether and when she/he/they will be able to receive the bounties of science. Even today 25% of people living with HIV are not on treatment and last year (2020), 690,000 people died from AIDS related illnesses and 1.5 million were newly infected with HIV, despite the best tools that science has doled out. Readers, this is the concluding article in the series of an exclusive trilogy authored by CNS head and IAS HIV Science 2021 Media Fellowship Awardee Shobha Shukla.

Oral PrEP (Pre-Exposure Prophylaxis), the first biomedical intervention for prevention of HIV, was approved by US FDA for adults in 2012. But as per latest data of AVAC’s Global PrEP Tracker only 1.3 million people globally have been initiated on it (as against UNAIDS target of reaching 3 million by now) and that too mostly through implementation and demonstration projects. PrEP is available at the national level in the public sector mostly in countries of the global North, with the exception of Thailand and Uganda in the global South, and is still not affordable in many low- and middle-income countries. The lessons learnt in the delayed and fractured roll out of PrEP should not go waste but soften the ground for the launch of future products.

European Medicines Agency (EMA), US FDA and Health Canada have already approved the 2-monthly long-acting Cabotegravir/ Rilpivirine injection for treatment. But it is anybody’s guess when it will be approved in other countries. Moreover, Rilpivirine requiring a cold chain, would make it more difficult for low- and middle-income countries to include it in their national health system.

EMA and the World Health Organization (WHO) recently approved the dapivirine ring for use as an additional HIV prevention choice for women in high burden settings. Zimbabwe is the only country in the global South that has been quick to approve this female-initiated long-acting prevention product. However, dossiers of the ring have been submitted to national regulatory authorities of 7- 8 other African nations, informs Dr Zeda Rosenberg, founder CEO of International Partnership for Microbicides (IPM), which has developed the ring. But it would still be quite some time before it reaches the hands of women who need it most. And the process for seeking its regulation in southeast and south Asian countries is yet to begin.

Also, let us not forget that Dolutegravir was approved for use by adult people living with HIV in 2013 and quickly became one of the most widely prescribed treatments for HIV in most high-income countries. But it took another 4 years to roll out its generic, affordable version in Africa in 2017. Likewise, in June 2020 US FDA approved a dispersible and flavored pediatric formulation of Dolutegravir for use in infants and children. But till now only few countries, like Uganda, have been quick enough to roll out its generic formulation.

From research to implementation is a long and arduous journey with too many stumbling blocks. Many discussions at the recently concluded 11th International IAS Conference on HIV Science (IAS 2021) centred around the challenges, and solutions thereof, to speed up the processes to get any new product into people’s hands.

First and foremost is getting the product approved by global regulatory bodies like the WHO, US FDA and EMA. Next comes individual countries’ willingness to endorse the product (and different countries may have different regulatory processes). Countries take quite some time to understand the guidance given by WHO and others, may hold in-country demonstration or bridge studies, and then disseminate that information to the service providers. This process usually could take about a year. So national templates must be developed early on for countries to adapt quickly, advises HIV prevention advocate Definate Nhamo of Zimbabwe AIDS Trust.

Clear, accurate, and reliable information, needs to get to all people living with HIV to make informed decisions. Very often the communities are not aware of the latest scientific advancements that are being done for their benefit. Providing complete knowledge and information to the communities about any new product is critical, says HIV activist Jacqueline Wambui from Kenya.

“The first thing is to have the latest information available down to the grassroots. Only then can the communities demand the new products. If you do not know about it, you cannot ask for it. And if you do not ask for it, they will not give it to you. Also, we must ensure that these products will be available consistently and we will not have to face stockout,” she adds.

Differentiated, simplified, decentralized, and client-oriented delivery of the products can go a long way in increasing accessibility. It is not just the communities, but the service providers too should have adequate knowledge about the product(s) for improved product delivery and client monitoring.

Service delivery must be community specific and driven by the needs of potential consumers of the intervention. Service providers need to be culturally sensitive and fully engaged with the community, feels Jim Pickett of AIDS Foundation Chicago. Jim has also dedicatedly led the global campaign for rectal microbicides and other HIV prevention options (formally called the International Rectal Microbicides Advocates or IRMA).

“We need to consider mobile and community-based delivery locations, including home-based delivery, and hours of delivery that are convenient to the people. We need tools and programs that are tailored as per people’s needs”, added Jim Pickett.

Services need to be delivered in an integrated manner and not siloed. We should be able to access HIV prevention services, family planning services, and other services for sexually transmitted infections (STIs), all at one place – preferably a community-based place. It would help to involve communities and utilise community cadres who can be trained to deliver some of the services, says Nhamo.

High cost of the product is another deterrent for its uptake, unless they are subsidized or their generic equivalents are made available. For example, the dipivefrine ring is currently priced at around US$ 15, which is unaffordable for the majority of women of low- and middle-income countries. Similar would be the case with long acting Cabotegravir/ Rilpivirine injection that is not being manufactured generically as of now.

Intellectual Property Rights often act as the big elephant in the room that results in interventions taking a very long time to reach countries of the global South, where most of the HIV infections are happening.

“In my country USA a lot of research and development of novel HIV prevention and treatment products is through grants from the government that is funded by US taxpayers. Pharmaceutical companies more than recoup their investments, building their largesse on the backs of tax payers, and we have very limited access to generics. I am not against profit for pharmaceutical companies, but then how much profit is enough for them?”, rues Pickett.

He cites the example of Truvada (oral PrEP) that costs US$ 1800 a month in USA. But as of March 2021, some companies are offering its generic version at US$ 30 a month, and yet making a profit.

A conducive policy environment and leadership is very important and can make or break everything else we do. In the opinion of HIV activist Susan Cole, “We activists have to ensure that the results of scientific research form our policies and not get side tracked by ideology. Scientific evidence proves that criminalization is a direct threat to the HIV response. Countries with progressive laws and human rights protection in place are doing much better in tackling the HIV epidemic, while countries that criminalize same sex relationship, sex work and drug use, have more people with undiagnosed HIV and lower rates of viral suppression. All communities should benefit from the results of science, else public health value of these scientific advancements will be very limited”.

Ending health inequity is must for ending AIDS

Pickett too calls to end health inequity to end AIDS. He emphasizes that, “We have to identify the ‘virus’ of white supremacy and racism that has been plaguing the world’s structures and systems for years. We have to dismantle racism as well as patriarchy that has led to problematic and egocentric selfish decisions. If we do not realize and address the underlying sickness that is hurting our health, happiness, and wellness in so many ways we will not be able to get there with equitable delivery of scientific advancements.”

Shobha Shukla, a regular contributor to Blitz is the award-winning founding Managing Editor and Executive Director of CNS (Citizen News Service) and is a feminist, health and development justice advocate.