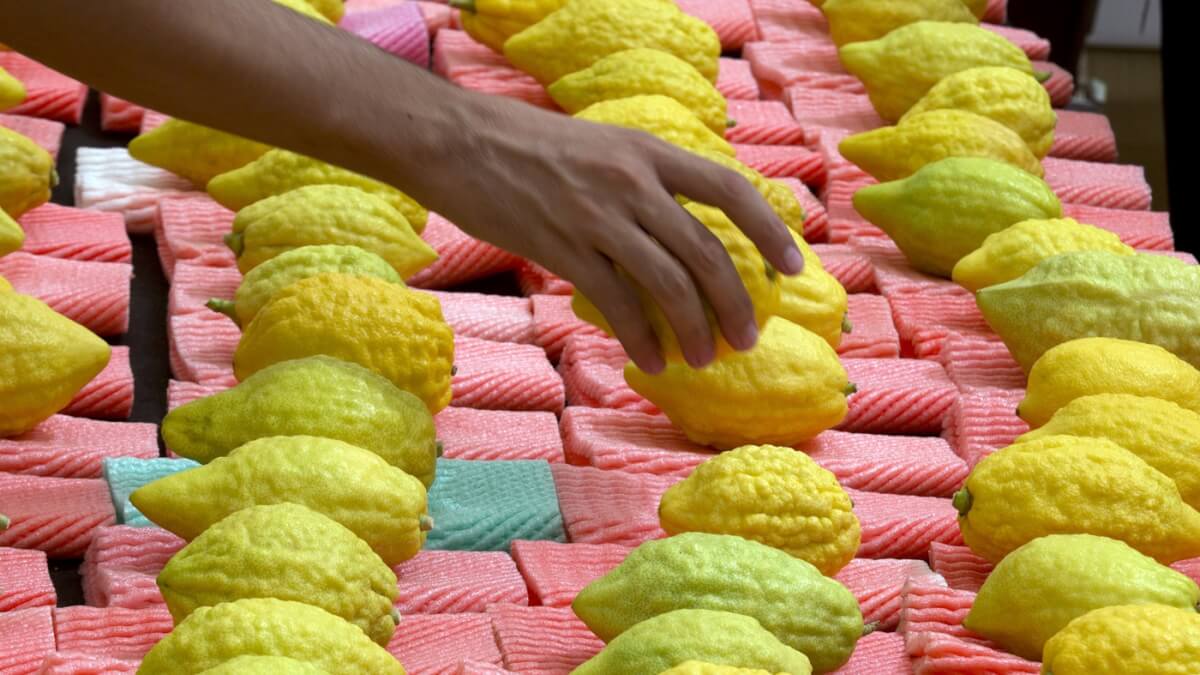 For most Jews, the etrog, a thick-rinded citrus, is relegated to a fleeting, supporting role. Held beside the lulav (palm frond) once a year during the upcoming festival of Sukkot, the etrog (citron) is then left to dry out or, if its lucky, turned into jelly.

But we have massively underestimated this super citrus. The etrog is far more than a prop, it’s a wellness goldmine that’s been lauded throughout history — from Alexander the Great’s troops who may very well have (but probably didn’t) discovered it when passing through Persia, to Buddhist monks in ancient China – for its wide-ranging healing properties. It also has great genes! As one of the oldest citrus varieties, the etrog is basically the great-great grandfather of oranges and lemons, which were developed through hybridization with it.

Luckily, the Yemenite Jewish community stayed woke and quietly enjoyed the etrog’s numerous benefits for centuries until, 15 years ago, a shrewd entrepreneur named Uzi Eli set about introducing Israelis to the generations-old etrog-centric remedies passed down his family. Known as the “Etrog Man,” Uzi opened a stall in Jerusalem’s Mahaneh Yehuda market, and Tel Aviv’s Carmel market over a decade later.

He’s a colorful character who once told me that his secret to looking far younger than his 70-plus years was etrog juice and breast milk — which was his sole form of nourishment until the age of 10.

I spent a lot of time with Uzi Eli and his daughter Maayan, who mans the Tel Aviv stall with impossibly dewy skin, while working as a culinary tour guide in Israel. For months I watched from afar, bemused, as they spritzed and massaged various oils and creams on unsuspecting tourists, on the promise that they’d cure acne, fade wrinkles, and increase libido. I stopped being a bystander when Maayan insisted on rubbing their etrog-infused vitalium lotion, a “multi-use herbal concentrate [which] functions as a comprehensive local analgesic,” on a nasty looking burn I’d acquired while wrestling my oven that morning. Two days later, with no trace of a scar, the burn was gone — and I was hooked.

Like Uzi Eli, Ayurvedic medicine, a holistic healing system developed in India over 3,000 years ago, uses etrog juice to curb nausea and excessive thirst; references in Ayurvedic literature from 800 BC have led many to believe that the citron is native to India. Others argue that it originated in China where, until today, a variety known as the Fingered Citron (also known as Fo Shou or, my personal favorite, Buddha’s Hand), is used to treat nausea, bloating, and chronic coughs. Perplexingly, the Greek philosopher Theophrastus, sometimes referred to as the “Father of Botany,” praised the vomit-inducing properties of the etrog, which he prescribed when “one has drunk a deadly poison.” This seems to be a Bertie Bott’s Every Flavour Beans situation, best played only by the sturdy-stomached.

For the more cautious, I’d suggest brewing a simple tea from the etrog’s leaves, or mixing etrog jelly with sugar and honey a la yuja-cha, a popular Korean cold remedy made with yuzu. Modern medicine advises avoiding the etrog’s seeds, contrary to the advice of Pliny the Elder – a Roman Empire-era commander, naturalist, and etrog enthusiast who endorsed chewing the seeds to reduce morning sickness.

Despite his dodgy advice, Pliny wasn’t alone in connecting the etrog to pregnancy; due to its breast-like appearance, the citron is a feminine symbol in Jewish spiritualism, and has long been linked to various childbirth-related segulot (Jewish superstitious charms or rituals). One segula dictates biting off the pitom (stigma) to guarantee a son, or placing it under your pillow for an easy labor. To the cynics among you, I can only relay my sister-in-law’s story with a shrug: Force-fed etrog jam by my mother-in-law when her contractions began on the promise that it would ensure the birth was as painless as possible, my niece basically fell out. After pestering my mom friends for intricate play-by-plays of their birthing experience, I take the view that anything which could potentially reduce the torment of childbirth is worth a try.

When it comes to wellness, we need not look much further than Jewish healing and spiritual tradition. The etrog, which combines both, is an excellent place to start. Now, who’s up for a cuppa?

Rachel is a freelance journalist from the UK, now based in New York after a five year stint in Tel Aviv. She writes about all things cultural, with a focus on food, and has been published in Time Out, Vice, and the Forward, amongst others.

Like Loading...
Recommended for you:
Continue Reading
Advertisement
You may also like...
Related Topics:Despite his dodgy advice, He’s a colorful character, I’d suggest brewing a simple tea