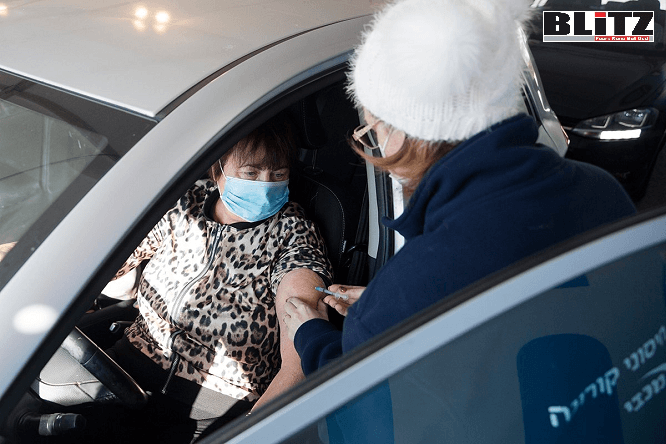 The story of Israel’s lightning-fast inoculation of its population with the coronavirus vaccine – a far greater percentage than any other country has managed to vaccinate – is reported on here: “Israel Stuns Observers With Lightning-Fast COVID-19 Vaccine Rollout,” Algemeiner, January 1, 2021:

Over one million Israelis have now been vaccinated against the coronavirus in the first weeks of the country’s rollout, a per capita rate that is by far the fastest internationally and which has stunned observers from around the world.

More than 11% of the country’s population has now been given the COVID-19 vaccine — more than three times the next-fastest country, Bahrain, and well above the global average of 0.13%, according to data from Oxford University’s Our World in Data.

Israel’s rate of inoculation so far is thus nearly 100 times that of the average worldwide: 11% instead of 0.13% — an extraordinary feat.

Max Roser, an Oxford researcher who founded the initiative, tweeted Friday that Israel “is rapidly getting to a point where mass deaths and mass lockdowns are over.”

Canadian Member of Parliament Peter Kent tweeted Friday, “how + why did Israel procure enough vaccine to treat more than 100K people everyday this week? Because it had to – Israel acted early, effectively and with organization driven by national security.”

The nightly news accounts I watched managed to turn a story of Israeli success into something not quite as winning. They delivered the news of Israel’s rapid vaccination of its population, but did not go into all the steps the Israeli government had taken, in planning the timetable, buying very large quantities of several different vaccines months in advance, preparing for swift distribution (which required special care to ensure that the Pfizer vaccine could be stored at -70 degrees Celsius (and the Moderna vaccine at -20 degrees Celsius), and then vaccinating people at facilities open round the clock (a simple and obvious step that, apparently, many other countries have not been doing).

But having shown Israelis being vaccinated, the news item switched quickly over to pictures of black Africans in their own countries not being inoculated, and the voiceover compared their inability to obtain any vaccines at all with the Israelis who, by having or about to have enough vaccine to cover their entire population, are somehow being blamed for the paucity of vaccine elsewhere. Why blame Israel for that lack? Why not, say, blame the U.S., or the U.K., or China, or India, which are using tens of millions more doses of vaccines than tiny Israel, which has only 0.11% — that is, one-thousandth — of the world’s population? Should we begrudge Israel its success? Should Israelis feel guilty for having bought millions of doses of both the Pfizer and the Modena vaccines early on, and planned so well for rapid distribution of the vaccine to its citizens?

Another noticeable omission in these television reports was any mention that Israel was vaccinating all of its citizens, Jews and Arabs, with equal rapidity.

There was no mention that the 1,000,000th recipient in Israel of the vaccine was an Arab, Muhammad Jabarin, in the Arab town of Umm al-Fahm, whose vaccination was highlighted in Israel as part of the campaign to persuade its Arab population to get the vaccine. Why was Muhammad Jabarin not shown, being congratulated by both Prime Minister Netanyahu and Health Minister Yuli Edelstein, and why no mention of Israel’s intense effort to get Israeli Arabs vaccinated? Why did none of the coverage on television mention that Arabs in Israel were receiving doses at the same speed as Israeli Jews, and in the same order (with essential medical workers first, then inhabitants of nursing homes and then the elderly, and so on)?

Wasn’t that newsworthy, considering how many charges of Israel mistreating its Arab citizens are made at every international forum, including, most infamously, the U.N.?

Many of the stories of Israel’s vaccination of its citizens mentioned that the Israelis had not provided vaccines to the Palestinians in Gaza and the West Bank. But the Palestinians are responsible for their own health care under the 1990s Oslo peace accords. Why was this not mentioned? Is it Israel’s fault if the Palestinians did no planning at all, in the months following the first worldwide outbreak of the pandemic last March? And why did Abbas continue refuse to have any dealings with Israel, even when Israel wanted to discuss possible cooperation on vaccinations? According to Abed Rabbo, head of the Health Ministry in Gaza, the Palestinian Authority only began approaching drug makers in the last few weeks – that is, in late December — long after other countries had made their own vaccine deals. Was that failure of the PA to act Israel’s fault? Is the colossal mismanagement and corruption endemic in the PA government, that goes far beyond its inability to deal with the pandemic, Israel’s responsibility? The financial crisis in the PA, which partly explains its inability to pay for vaccines, was brought on by the Palestinians themselves, who until December refused to accept the more than $800 million in taxes on imports that had been collected for them by Israel; the Jewish state was eager to turn over that money, but Mahmoud Abbas had refused to have any dealings with Israel – he refused to take the money until the beginning of December — in yet another grotesque example by the PA of cutting off your nose to spite your face.

How should the story of Israel’s vaccination success have been covered?

“Israel has already managed to vaccinate more than 10% of its population, a far greater proportion than any other country, more than ten times the percentage vaccinated—0.84% — in the U.S–and nearly 100 times the percentage of 0.13% vaccinated that is the average worldwide. How did it do it? First, the Israeli government has been planning for months. It was among the first states to commit to buying millions of doses of both the Pfizer and the Moderna vaccines, almost enough to cover its entire population of 8.7 million. It agreed to pay top dollar, twice what was being paid by European countries and the U.S., for the vaccines, in order to ensure delivery.

“Second, Israel planned the roll-out of the vaccine like a military campaign. It made sure that special sub-zero freezers, able to store Pfizer vaccines at -70 degrees Celsius, were available across the land, at all hospitals and other distribution centers. Unlike in other countries, the vaccine has been given not only during the day, but round-the-clock.

“Third, Israel’s Health Ministry carried on a very effective campaign of persuading citizens to get the vaccine. Special attention was given to Israeli Arabs, who were deemed more reluctant to be inoculated than Israeli Jews. When the one-millionth person to be vaccinated turned out to be an Arab, Muhammad Jabarin, much was made of this: both the Prime Minister and the Health Minister were present when he was inoculated. It was part of the effort to persuade Israeli Arabs not to fear, but to welcome, the vaccine.

“Fourth, Israel has already bought close to the total number of doses it needs to cover its entire population. It has also said that it plans to buy more, and if it ends up with a surplus it will provide those extra doses of the vaccine to the Palestinians. And no doubt Israeli Health Ministry planners will also aid the Palestinians — who until mid-December had not bought any vaccines for themselves — in the complicated logistics involved in getting the vaccine to millions of people.”

That gives viewers a more truthful view of Israel’s admirable success, instead of singling out Israel for criticism for daring to have provided itself with an ample supply of the vaccine, while there is a lack of its availability in black Africa. Careful planning, prudent risk-taking (in buying millions of doses of vaccines even before their efficacy was fully assured), military-like skill in logistics, have all been part of Israel’s success. And once its own population — Jewish and Arab — is fully protected, Israel stands read to help the Palestinians, supplying them with whatever surplus vaccine it possesses and, no doubt, lending them a much-needed hand with logistics.