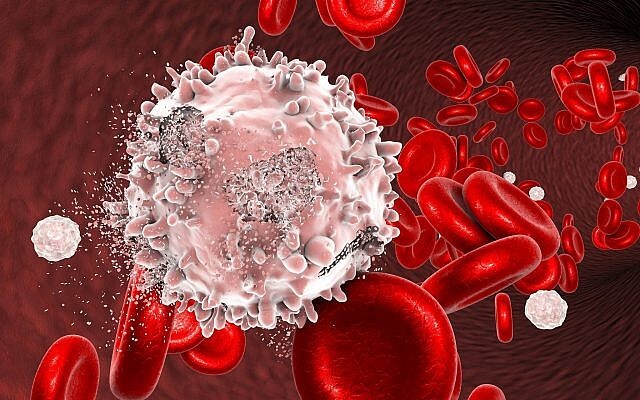 Researchers at the Hebrew University of Jerusalem said they have developed a new biological drug that had a 50 percent cure rate for lab mice with acute leukemia.

Researchers at the Hebrew University of Jerusalem said they have developed a new biological drug that had a 50 percent cure rate for lab mice with acute leukemia.

The results were published last week in the scientific journal Cell.

Acute myeloid leukemia is one of the most aggressive cancers, and while other cancers have benefited from new treatments, there has been little encouraging news for most leukemia patients for the past 40 years, the researchers said in a statement. (One notable exception is the drug Gleevec, which targets chronic myeloid leukemia and is based on the work of Israeli researcher Eli Canaani at the Weizmann Institute).

The rights to the molecule they developed has already been sold by the technology transfer arm of the Hebrew University, Yissum, to US pharma firm BioTheryX, with whom the team of researchers will continue to work to further develop the medication and apply for FDA approval for phase I clinical studies on humans.

Adult acute myeloid leukemia (AML) is a type of cancer in which the bone marrow makes abnormal myeloblasts, a type of white blood cell, red blood cells, or platelets, according to the National Cancer Institute.

Eventually, a person with the disease will start to lack red blood cells that help carry oxygen, platelets that stop bleeding, and white blood cells that protect the body from diseases. That’s because the ailing body is too busy making the leukemic blast cells, and the result can be deadly.

Leukemia is difficult to treat because the variety and quantity of proteins it produces enable cancerous cells to grow rapidly and protect them against chemotherapy treatments.

To date, most of the biological cancer drugs used to treat leukemia target only individual leukemic cell proteins. However, during this kind of “targeted therapy” treatment, the leukemic cells quickly activate other proteins to block the drug. The result is drug-resistant leukemic cells that regrow and renew the disease.

The new drug developed by Professor Yinon Ben-Neriah and his research team at the Hebrew University of Jerusalems Faculty of Medicine functions like a “cluster bomb,” the researchers said in a statement.

The molecule they developed — by chemically manipulating a cancer cell — attacks several leukemic proteins at once, making it difficult for the leukemia cells to activate additional proteins to evade therapy.

The researchers saw “a dramatic change even after only a single dose of the new drug,” Ben-Neriah said in the statement. “Nearly all of the lab mice’s leukemia signs disappeared overnight.”

“The single molecule targets many leukemia proteins at once and destroys all of the oncogenes, and activates the tumor suppressor P53” gene, Ben-Neriah said in a phone interview.

“P53 is a good guy,” he explained. Not only does the new drug kill the cancer cells, it also destroys the “antagonists” that work against the P53, helping activate the tumor suppressor.

The molecule “worked very well with mice,” he said, both in mice that had leukemia and those that were injected with human leukemia. “It worked even on the most aggressive of human leukemia” injected into the mice, he said.

The drug developed by the researchers is in pill form, not an injection, Ben-Neriah said.

Ben-Neriah said he hoped the phase I clinical study will start in the US at the beginning of 2019. It will take a minimum of two to three years before the drug can be commercialized, he said.

Leukemia is only one indication for the drug, he said. The researchers are trying to expand its use to other cancers, including lymphoma, multiple myeloma, melanoma and colorectal cancer, he said.

In addition, the researchers said, this single-molecule drug accomplishes the work of three or four separate drugs, reducing cancer patients’ need to be exposed to several therapies and to deal with their often-unbearable side effects. This molecule caused no worrisome side effects for the mice, on whom safety studies were performed.

Also promising, the researchers said, is that that new drug was found able to eradicate leukemia stem cells. This has long been the big challenge in cancer therapy and one of the main reasons that scientists have been unable to cure acute leukemia.