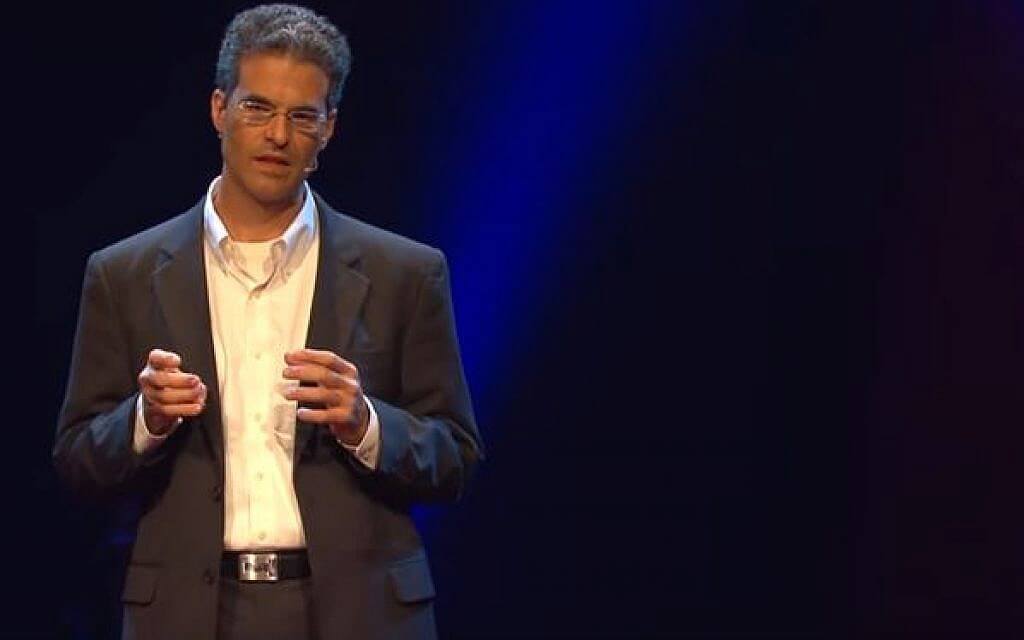 If one needs proof that necessity is the mother of entrepreneurship, then the story of Avi Yaron, who was diagnosed at the age of 26 with a life-threatening brain tumor, offers an ample supply.

Now 51 and in good health, Yaron has survived four brain operations in the US, Europe and Israel, designed a surgical tool that helps surgeons better treat people with his condition, and is on a quest to find the key to wellbeing in an era in which there is, he says, a “huge gap” between technology and human evolution.

“We are subject today to endless pressures and stresses,” Yaron said in an interview with The Times of Israel. “The era in which we live in has a surplus of food and a surplus of worries. Technological developments have increased the intensity of everything, from the speed of communications to travel, and we, as humans, are not yet able to cope with these huge changes. Thus, we have developed unhealthy habits to deal with this stress, like eating too many crabs, smoking or drinking, or sleepless nights. We have no time to rest.

“And even if we don’t live with imminent danger, like the prehistoric human, we also don’t have respite. We are a machine that works all the time, and in the end, it breaks.

“I want to use technology to bridge the gap between technology and our evolution. I want to treat the healthy person, and not the one already afflicted with illness. Illness is a way for our body to tell us we are out of balance. My body was screaming, but I didn’t listen.”

Yaron was 26 in 1993 when he had a motorbike accident. While doing a routine MRI scan to check if he’d suffered a concussion, the doctors found a tumor right in the middle of his brain.

Yaron, a healthy, athletic electrical engineering student who loved to party and work hard, sleeping just a few hours each night, found himself suddenly sitting in front of a neurosurgeon who told him: “Avi, you have a brain tumor, it may be cancerous. You must have surgery as soon as possible.”

The doctors warned him that any operation would be complex because of the location of the tumor — he’d survive, they said, but most likely would emerge from surgery with a handicap, and possibly with cognitive challenges and epilepsy.

With his world as he knew it in pieces, Yaron refused to undergo surgery.

“I don’t know if it was amazing intuition or pure denial, but that decision saved my life,” he said in a TEDx talk posted on YouTube. “For a while I felt really sorry for myself and I realized my amazing plans I had for my life were over, finished. After a while I picked up the pieces and decided to fight for my life.”

“When entrepreneurs encounter problems that are unresolved, they study the matter and try to solve it. And sometimes they manage to,” Yaron said in the interview. “The biggest distress sometimes leads to good ideas.”

He started studying medicine independently at the university library — anatomy, biology, chemistry — reading clinical articles to find out more about his condition and how much time he had to live. He looked at what technologies were available for his condition and met with doctors in Israel, Europe and the US.

Eventually, he found a surgeon in New York who was able to remove the tumor. But he was not able to remove it all, and gradually it started to grow again, albeit gradually, as it was benign. And that was because the surgical tools available to physicians at the time — endoscopes that guided doctors in minimally invasive operations — did not have the required three-dimensional depth needed to fully visualize the site.

And that is what spurred Yaron into motion: he did not want to undergo an operation every few years; he refused to become a “zipper head” for the rest of his life, so he set out to develop an endoscope with better visual properties, mimicking the eyes of an insect.

“Mammals need two eyes to see depth perception,” he explained. “But a bug eye sees depth just with one eye, because it is made up of a matrix of hundreds of eyes, each of which look in a different direction. So, I created an eye — using a small silicon chip and software algorithms, that combines the vision of a bug with that of a human, allowing surgeons to get a fuller picture even as they operate via a very small hole.”

“The product I developed was too late for me,” he added ruefully. “Had it been developed when I needed it, it would have saved me all those added operations. But today, there are many who benefit from my invention.”

The company he founded, Visionsense, which developed the product, found it hard to raise funds, as investors were hesitant to invest in an entrepreneur with a “ticking bomb” in his brain, he said. But he persisted, and, after four operations and having burned millions of dollars in investments, the product was developed and launched in 2008, since when it has helped save thousands of lives, he said. Visionsense was sold earlier this year to the US medical equipment maker Medtronic for $75 million, a huge recognition for Yaron, who however had already left the company in 2014 to pursue other challenges.

Since his departure, Yaron helped found Joy Ventures in 2016, a $50 million joint Israeli-Japanese VC fund, which hopes to find ways and technologies to invest in consumer products that offer stress relief and improve wellbeing.

Yaron left Joy earlier this year, and has moved on, spurred by his thirst to find answers to bring a healthy balance back to our lives.

“I’m not sure yet what exactly I’m going to do,” he said. “But whatever it is, it will have to be personalized, predictive and preventative, using the vast amount of genetic information we now have at our disposal and also data analytics and machine learning to make sense of it all.”

“Our bodies are like a necklace. If you pull too much, one of the links breaks, and that is when we get ill,” he said. “Each one of us must understand what their weak link is and take care of it, before the necklace breaks.”

Like Loading...
Recommended for you:
Continue Reading
Advertisement
You may also like...
Related Topics:and in the end, I want to use technology to bridge the gap between technology and our evolution, it breaks, We are a machine that works all the time, We are subject today to endless pressures and stresses