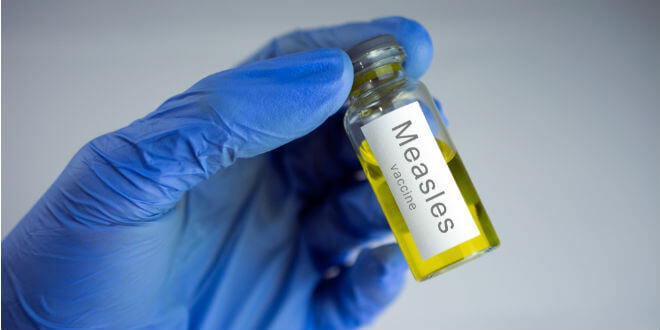 Measles – the highly contagious viral disease caused that affects 20 million people and kills about 75,000 per year, mostly in developing countries in Africa and Asia – is a good candidate for eradication. There is an excellent, very effective vaccine, and unlike influenza and other infectious diseases, it does not occur in animals.

Symptoms usually develop 10 to 12 days after exposure to an infected person and last seven to 10 days. The airborne disease is so infectious that one need only be in the same room as someone with the measles; one doesn’t have to be within coughing or sneezing distance or to be touched to get it.

Initial symptoms typically include fever, often greater than 40° C (104.0° F), cough, runny nose and red eyes. A flat, red rash that usually starts on the face and then spreads to the rest of the body is its most famous symptom.

Serious complications include bronchitis, encephalitis, pneumonia, seizures, corneal ulceration and scarring in the eye, blindness and acute brain inflammation. Children who have weakened immune systems due to cancer or other conditions are particularly vulnerable. In addition, measles can suppress the immune system for weeks to months, and this can contribute to ear infections and bacterial pneumonia.

About one in every 1,000 patients develops a brain inflammation that involves permanent damage. Death results from neurological or respiratory complications.

Through the early 1960s, getting the measles was so common that if one child was infected, parents often brought their healthy children to be near him to get over with the infection. But a safe and effective vaccine was introduced in the Western world in 1963, making reported cases of measles fall from hundreds of thousands to tens of thousands a year in the US in the 1970s and only thousands annually in the 1980s.

So if there is a protective vaccine, why hasn’t measles been wiped out like smallpox? Measles eradication – defined as a halt in the transmission of measles around the world so that vaccination can be stopped – is theoretically possible.

First, the vaccine is not effective in babies under the age of one year. Secondly, immunization costs money, and many very poor countries cannot afford it, even with some help from the World Health Organization. Others are infected because they do not have access to high-quality medical care.

In addition, there are older adults who were never infected naturally and not vaccinated as children, and they can be a source of infection. For the incidence of measles to fall toward zero, it is estimated that more than 90% to 95% of the population must become immune. In 1995, 32 countries reported measles vaccine coverage levels below 60%; in Haiti, for example, reported coverage of routine infant immunization then was only 23%.

With the increase in global air travel, if one airline passenger has the measles, he can infect many on the plane.

A growing problem in the West is the Internet and social networks, through which misinformed people who are ideologically opposed to vaccinations in general try to persuade others not to protect their children. This has occurred in developed European countries, where some parents decline to vaccinate their children. As a result, the World Health Organization reported that in the first half of 2018, more than 41,000 measles cases were reported in Europe; 40 children and adults died of it.

The first vaccine dose should be given around a baby’s first birthday and the second dose when he or she reaches first grade; the shots offer about 97% protection rates.

A new Israeli study published in the Journal of Pediatrics has found that children of uneducated women in this highly developed country are more likely to remain unvaccinated or to suffer from delayed vaccinations. Scientists from Ben-Gurion University of the Negev in Beersheba showed there the less the formal education of mothers, the less likely it is that their children aged two to four years receive the full course of state-recommended vaccinations.

The research by post-doctoral researcher Dr. Guy Hazan, under the supervision of Profs. Ron Dagan and Michael Friger of BGU’s Faculty of Health Sciences is especially important now, as Israel is in the midst of a serious outbreak of the measles. One 18-month-old Jerusalem baby died of measles complications recently, the first such case since 2003. In addition, more than 1,400 cases of the measles have been reported so far this year, compared to only a few dozen during the whole of last year.

The vast majority of the new cases of measles have occurred in Jerusalem, and of these, almost all affect parts of the ultra-Orthodox Jewish community. More extreme groups in this sector who don’t accept the Jewish State refuse contact with the state, and thus do not take their children to well-baby clinics.

A smaller group responsible for the spread of measles in Israel are Jews who don’t believe in vaccinations, preferring the “natural medicine” approach and falling for “fake news” they read on the Internet. The Israeli government is considering the barring of unvaccinated children from pre-schools and other educational frameworks and punishing recalcitrant parents by cancelling tax credits.

The BGU study is based on review of records that included 2,072 toddlers at five preventive-medicine mother-and-baby centers in southern Israel between 2015 and 2016. It focused on a variety of vaccinations against children’s diseases: hepatitis B, diphtheria-tetanus-acellular, pertussis (with or without poliovirus vaccine), measles–mumps–rubella–varicella and hepatitis A.

The Health Ministry renewed its call for children to be vaccinated against the diseases between the ages of 18 months and seven years of age.

“We found that mothers’ education was inversely associated with the probability of vaccination delay by 4% to 9% (depending on the vaccination visit) for each year of schooling beyond 10 years,” the study found. There was no correlation between the fathers’ levels of education and vaccination delays. The researchers conclude that better education that emphasizes the importance of education on vaccination timeliness could also act as a catalyst to improve other health-related behaviors.