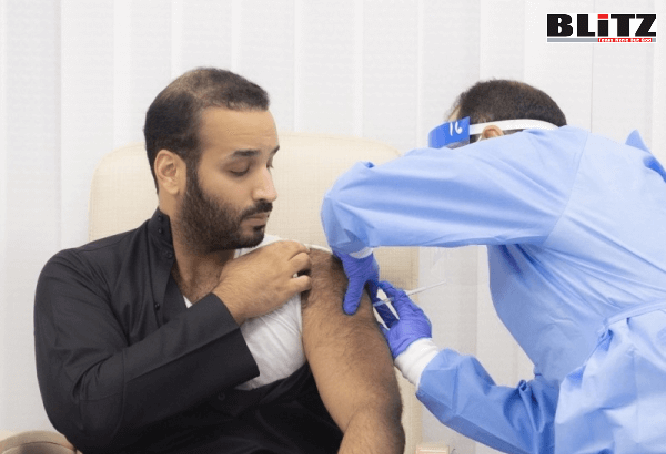 Crown Prince Muhammad Bin Salman, deputy premier and minister of defense, has received the first dose of the COVID-19 vaccine on Friday.

Minister of Health Dr. Tawfiq Al-Rabiah thanked the Crown Prince for his keenness and ongoing follow-up to provide vaccines to citizens and residents with the best services.

What we are witnessing today, is among gains materialized, in Saudi Arabia, since the beginning of the pandemic, as an extension falling within the framework of the Vision 2030, guided by the policy of “prevention is better than cure” the minister said.

Such policy is represented by intensifying proactive precautionary measures, emphasizing that human health is first, providing safe and internationally recognized vaccines, in record time, and presenting the vaccines to citizens and residents, alike, a matter that made the Kingdom among the best countries, in the world, in terms of facing the coronavirus pandemic, the minister added.

On Dec.17, Saudi Arabia began the largest vaccination campaign against COVID-19, with Minister of Health Dr. Tawfiq Al-Rabiah becoming the first citizen to receive the vaccine.

Dr. Al-Rabiah stressed that the largest vaccination process in the Kingdom began in line with the directives of Custodian of the Two Holy Mosques King Salman, and with direct and regular follow-up from Crown Prince Muhammad Bin Salman to launch the vaccination process. “We are keen to provide doses to all,” he said after receiving the shots.

Citizens and expatriates in the Kingdom began to receive the vaccine free of charge. The minister said: “We will have vaccine centers in all regions of the Kingdom. We are keen to make the vaccine safe and provide doses against coronavirus for everyone.”