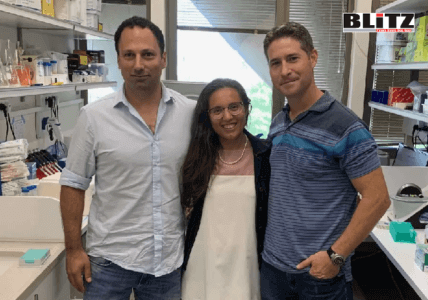 Israel’s revolutionary CAR-T cancer treatment, which has proven successful in treating the blood cancer leukemia, might now also be effective in killing solid tumor cells coated in specific antibodies, according to research published this month in the Journal of Clinical Investigation.

The study was led by Dr. Yaron Carmi of Tel Aviv University’s Sackler Faculty of Medicine.

Carmi told The Jerusalem Post that chemotherapy is currently the most common treatment for fast-growing, solid tumors. However, chemotherapy attacks healthy cells and tumors at the same time, causing serious side effects, such as hair loss, nausea, mood changes, pain, anemia and nerve and muscle problems, as well as heart and kidney issues.

“Immunotherapy, on the other hand, is a type of biological therapy that uses the body’s own immune system to seek out and destroy cancer cells,” he explained.

A Tel Aviv University release explained that CAR T-cell therapy is a form of immunotherapy that uses altered T cells to fight cancer. T cells are a type of lymphocyte, or white blood cell, that play a central role in the immune response (The “T” is for thymus, where the cells mature). T cells are collected from the patient and modified in the lab to produce structures called CARs on their surface. These Chimeric Antigen Receptors allow the T cells to attach to a specific antigen on the tumor cells and kill them.

Engineered T cells have been proven successful in treating blood cancer, but attempts to use them to fight solid cancers have been disappointing.

“We don’t know why,” Carmi told the Post. “There is no clear answer why it has not worked with solid tumors, which is the majority of tumors.”

“Our lab discovered a distinct subset of helper T cells, also known as CD4+ T cells, that express the high-affinity receptor for IgG [an antibody] and efficiently kill tumor cells coated with these antibodies,” he explained. “This method uses CAR T-cell therapy and combines it with antibody specificity. Based on this discovery, we were able to engineer novel T cells with enhanced tumor-killing activity and higher specificity, compared with other T cell-based therapies for cancer.”

The method proved successful in mouse models, which Carmi described as “a huge achievement.”

Currently, Carmi said he is in America so that his team will have the funding to move to clinical trials. He said that if the necessary money is raised, he believes the treatment will be available within two years for human trials and compassionate use.

“Because there is an awareness of the suffering that cancer patients endure, the FDA is more open to introducing new treatments,” he explained.

Carmi said he believes that the world is at the beginning of a medical revolution: the gene therapy revolution.

“We are now able to edit the genome of people and cure horrible diseases, like people born without any immune system – and it is coming to cancer treatment,” he said.

“Maybe our body cannot recognize and fight cancer properly, but we can alter or change it in a way that would enhance its capabilities to kill cancer,” he continued. “It may be the beginning, but it is a very exciting time for medicine.”