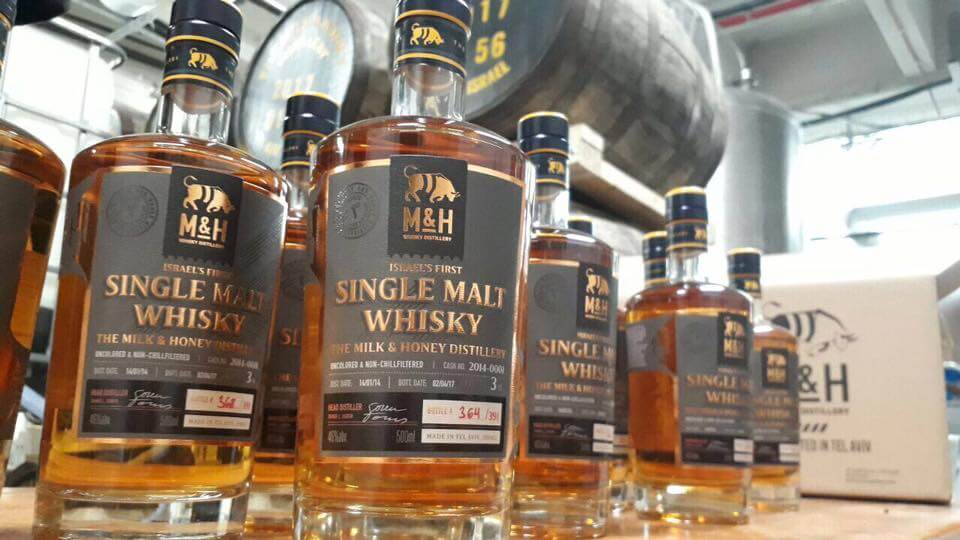 When David Zibell decided to start making whiskey in the backyard of his new home in the small city of Katzrin on the Golan Heights back in 2014, he used wheat in addition to the classic malted barley. Describing the inspiration for this recipe, Zibell, a former real-estate broker who immigrated to Israel from Montreal, referred to how Moses describes the promised land in the Book of Deuteronomy: “A land of wheat and barley, of vines, figs, and pomegranates, a land of olives and honey.” So the wheat and barley, along with local spring water, and oak barrels that once held wine for the nearby Golan Heights Winery are the ingredients that make his Golani Two Grain Whisky especially Israeli, he told me as he smoked a cigar outside his current distillery in the Katzrin Industrial Park.

“We are using two of the fruits of the land, so that’s also a strong Jewish connection,” said the self-taught distiller. The first batch of Golani Two Grain Whisky—aged in barrels for three years—was bottled in 2017, and established Zibell’s Golan Heights Distillery as the third commercial operation in Israel’s fledgling whiskey scene. But the sector is still growing, with two more distilleries currently being built—also by immigrants from North America. For these new players, making whiskey—an increasingly popular drink in Israel—is inseparable from their dreams and ideals about living in the Holy Land. It is part of their pioneering process.

“When you are starting off in a new place, you have new energy to explore new things,” Zibell said. “And you also see the things that are lacking in a place when you come from outside.”

Until recently, Israel lacked distilleries, as well as many opportunities for drinking whiskey, explained Gal Granov, a software engineer in the Tel Aviv suburb of Kfar Saba. More than a decade ago, Granov started the blog Whisky Israel, reviewing various foreign spirits, and organizing tastings and even trips to Scotland. “Back then, the interest in whiskey was very small in Israel,” Granov said.

But in the last decade, a lot has changed. First, Israeli tax reforms made whiskey more affordable, and more bars began serving it, Granov said. Rather than being taxed at 80 percent of the price of the bottle, whiskey is now taxed according to the amount of pure alcohol it contains, meaning the tax on most 1-liter bottles is only about 50 shekels ($13), no matter the price of the bottle.

“It’s not like a rich man’s hobby anymore,” Granov said. This accessibility, along with a growing culinary scene, opened the way for Israel to join the global trend of rising demand for unique craft spirits, including whiskey, Granov said. The global craft spirits market was worth more than $6 billion in 2016, and is expected to increase 33 percent by 2025, according to a report from Grand View Research. The restaurant Whiskey Bar & Museum, in Tel Aviv’s Sarona Market, has one of the largest whiskey collections in the world. And Whisky Live now holds an annual tasting event in Tel Aviv.

In 2012, a group of whiskey-loving Israeli entrepreneurs founded the Milk & Honey Distillery in Tel Aviv. A year later, Pelter Winery in the Golan Heights added a boutique distillery to its operations. Golan Heights Distillery followed, and two more distilleries, in Katzrin and near Beit Shemesh, are now under construction.

Milk & Honey’s CEO Eitan Attir said the growing number of distilleries is key to establishing a real industry in Israel. “It’s not competition—the more we have then we are actually seen as a category of Israeli whiskey,” Attir said. “And it’s very nice that immigrants are doing it here, rather than in their hometowns in America. This is a way they can serve Israel.”

A lot of different factors go into making whiskey, but one of the most important is the place in which it is made. Israel produces so-called new world whiskeys, those made in places outside the traditional centers of Scotland, Ireland, and Canada. Israel’s main advantage is its mild climate. The warmer weather means that whiskey—often aged more than a decade in its traditional places of production— can be produced more quickly here.

One of the challenges to making whiskey in Israel is the lack of a reliable local supply of grains, especially malted barley. Milk & Honey relies on imported barley, and the Golan Heights Distillery also imports the grains it uses. But this is something Zibell and other new immigrants are trying to change. Some are going to great lengths to try to make their products as Israeli as possible.

Inside a new building on the outskirts of the Katzrin Industrial Park, a whiskey still and stainless steel tanks are wrapped in plastic. Sacks of barley, ordered from a local farm, are stacked next to the distilling equipment. Once he finishes assembling his distillery, Yechiel Luterman plans to malt this barley himself, steeping it in warm water, waiting for it to sprout, then kilning it to stop the germination. After this process, which takes about a week, he will use it to make single-malt whiskey. He has already sprouted a few practice batches.

“I wanted the whole identity of the company, the brand, and the product to be tied to the land,” said Luterman, a former corporate lawyer who immigrated from Montreal about eight years ago. The ties to the land are also reflected in the company’s name: Edrei Malthouse & Distillery. Edrei is the name of the city where the Israelites defeated the giant Og, as the Bible tells it. This same area of land was also returned to Jewish rule in modern history, captured by Israel from Syria in the Six-Day War.

“I wanted the brand to recall both of those victories,” Luterman said. “It’s of tremendous significance as a symbol of inner strength that we can draw on.”

In the center of Israel, in the Elah Valley near Beit Shemesh—on what many believe is the site of another improbable Biblical-era victory, that of David against Goliath— two American olim are building a new distillery to make what they will call “Kentucky Whiskey,” a corn-based product. Because of its location, the distillery is called Legends and the drink will be called Slingshot. Like Luterman, Legends’ owners are also set on using all local ingredients, and recently signed a contract with a nearby kibbutz to grow corn they can use to make Slingshot. They know it would be easier to simply use imported corn, as they have done for test batches, but they said the location—and the story of David and Goliath— is an inspiration to them to work harder to make their ideal product.

“The story and the location certainly does connote the idea of overcoming immense obstacles, which of course symbolizes Israel, and it also symbolizes what we are trying to do now,” said Noam Cohen, a finance professional and one of the partners in Legends.

These new distilleries see themselves as spreading a passionate Zionist story, along with quality beverages. “I think people will want to buy the whiskey to connect to the land,” Luterman said. “It may be materialistic on the surface, but it’s a real kiddush Hashem.”

Even far from the hills of the Golan, in Tel Aviv, the sabras running Milk & Honey Distillery also see the whiskey and their other craft spirits as a chance to tell a story about Israel. “We want to show the world the startup-nation side of Israel,” Attir said. “We are a startup, and we aim to be the best new world whiskey in the world.” While they wait for their next batch of whiskey to age, they are making spirits that don’t require aging for both the local and European market. Their Roots Herbal Liquor, produced in honor of Israel’s 70th anniversary, includes the flavors that seven well-known entrepreneurs chose as those that embody the essence of Israel, including almond, thyme, and cardamom. Their Levantine Gin is made from barley and ingredients like hyssop, cinnamon, and lemon from the nearby Levinsky Market.

In the tasting room of Golan Heights Distillery, which also produces other spirits while its whiskey ages, Zibell’s wife, Alona, pours glasses of Holy Spirit Absinthe, made from locally foraged herbs, for a group of visitors from nearby Moshav Yonatan. The tasting room is the last stop on a tour of the distillery, where visitors see the machines for grinding the grains, the large pots where they are combined with water in a process called mashing, and the still that separates the alcohol from the water. On the wall hang architectural plans for a new and larger facility planned nearby to open next year, with one floor for production, one floor for tasting and cigar smoking, and one floor to be rented out for events. They plan to triple their current production capacity, and make up to 140,000 bottles of whiskey a year in addition to a variety of other distilled spirits. They hope the increased production will help them fill all their outstanding orders, as well as begin exporting.

This project is a fulfillment of a lifelong dream, Zibell said, much the way that moving to Israel also is. “It’s our baby,” added Alona, who has two young children with Zibell, as well as two from a previous marriage; Zibell also has two children from a previous marriage. But it was only moving to Israel that gave them the courage to open the distillery.

“As tough as Israel can be, people are coming here to realize a dream,” Zibell said. “And at least for me, realizing one dream helped me explore and realize other dreams.”