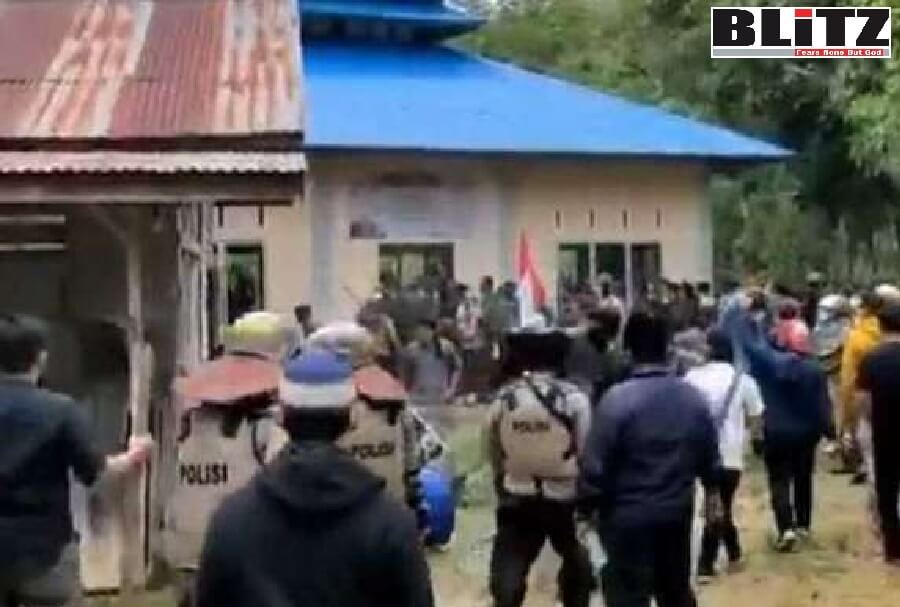 Muslim mobs have routinely launched planned attacks on the Ahmadiyya and burned down their homes and mosques in Sumatra, Java, and Sulawesi. Muslim hardliners and the Islamic Defenders Front (FPI) demanded a ban on Ahmadiyya teachings, as they deviate from fundamental Islamic principles. Writes Ashlyn Davis

A Muslim mob raided the Miftahul Huda Mosque belonging to the Ahmadiyya sect in Balai Harapan in Indonesia’s West Kalimantan province. The mob of around 200 local Muslims went to the mosque after their special Islamic prayers on Friday evening and tried to burn it down. When prevented by the police, they started pelting stones at it, forcing security officials to evacuate 72 Ahmadiyya followers from the building. Though the police saved the mosque from being set ablaze, the Muslims quenched their bigoted thirst by setting fire to a nearby building belonging to the Ahmadiyyas. Disturbing photos and videos purportedly of the attack have surfaced online and have been widely circulated. They show men armed with sticks hitting the windows of the mosques and the adjoining building going up in flames.

According to sources, the police have arrested 21 individuals suspected of taking down the establishment; while most of them were detained during police raids in their houses on September 5 and 6, some have turned themselves in. Searches for others involved in the attack are still going on.

A spokesperson of Indonesian Ahmadiyya Followers (JAI), Yendra Budiana, stated that the attack on the Ahmadiyya sect had ensued after the Sintang district government issued a notice on August 27, prohibiting all activities, including worship, at the Ahmadi mosque.

“The local government urged kami to close permanently Miftahul Huda Mosque and banned worship,” Budiana informed UCA News. “We have been receiving threats and faced acts of intimidation since early last month,” he added, stating that the mosque was built in Sintang in 2007 after the Ahmadiyya community settled there in 2004.

Condemning the violence, Religious Affairs Minister Yaqut Cholil Quemas said, “This sort of behavior, destroying a place of worship and property, cannot be justified and is a threat to interreligious harmony.” The Setara Institute for Democracy and Peace has blamed local authorities for failing to protect its people and accused them of violating their constitutional rights to worship freely and insulting their dignity. “Local authorities are bound by the constitution to protect its people regardless of their background, including Ahmadiyya,” asserted Catholic priest and social activist Father Antonius Benny Susetyo.

The Ahmadiyya/Ahmedi/Ahmediyah is a sect of Islam that believes the promised Messiah was Hazrat Mirza Ghulam Ahmad, who was born in Qadian, India and established the Ahmadiyya Muslim Community in 1889, under what he said was divine guidance. This sets them apart from other Muslims, who believe the promised Messiah has not yet arrived. The Ahmadiyya community often becomes the target of other Muslims’ ire in the country, as well as in Pakistan, as they are considered infidel or blasphemous by mainstream Muslim standards. They have faced discrimination, ongoing threats, and abuse in Indonesia since 1998.

The clashes intensified in the mid-2000s. During 2005 and 2006, Muslim mobs attacked around 90 Ahmadis, chasing them out of their homes. The victims had to seek refuge in temporary housing facilities in Transito and Praya districts in Central Lombok.

In 2008, the then-President of Indonesia, Susilo Bambang Yudhoyono, issued a ministerial decree that commanded the Ahmadiyya to discontinue propagating their teachings and activities that diverge from the fundamental codes of Islam. The persecution of the religious minorities by orthodox Sunni Muslims engendered by the issuance of this decree thus increased in Indonesia after 2008.

In February 2011, a mob of 1500 enraged Muslim rioters raided an Ahmadi house in Banten in West Java. Videos of the attack show the leader taking out a machete while others stormed into the house, inside of which were at least 25 Ahmadis. The rioters then took the men hostage, stripped them naked, and struck them with wooden sticks and hoes. Three of these victims were killed and six others were severely wounded. The house was set alight, along with a van and bicycle owned by the Ahmadiyya.

In 2013, city officials had to seal the Bekasi’s Al-Misbah thrice, and in the following year, the Indonesian Ulema Council of Ciamis in West Java commanded the Ahmadiyya community to cease activities at the Khilafat Nur Mosque after warnings of possible riots following the legislative election.

In another brutal attack on the sect, at least 24 Ahmadis from seven families had to be evacuated to the East Lombok Police headquarters after Muslim mobs from East Sakra plundered their houses, ransacked their vehicles, and forced them to flee their village.

Muslim mobs have routinely launched planned attacks on the Ahmadiyya and burned down their homes and mosques in Sumatra, Java, and Sulawesi. Muslim hardliners and the Islamic Defenders Front (FPI) demanded a ban on Ahmadiyya teachings, as they deviate from fundamental Islamic principles. They believe that persecuting members of the Ahmadiyya sect is a theologically justifiable idea, more so, a good religious duty. Quashing those deemed heretics is believed to be more than commanding right and forbidding wrong; it is jihad.