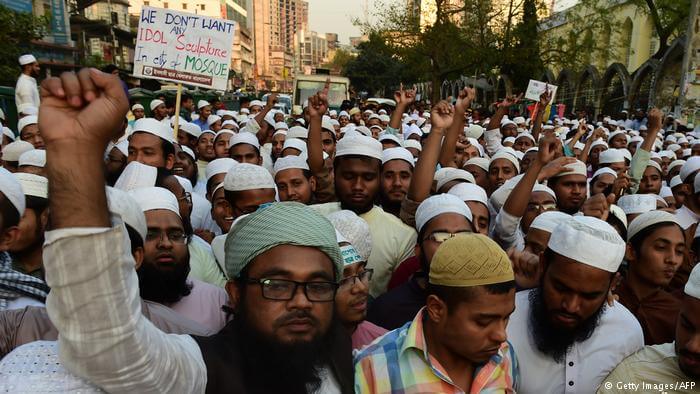 Disturbing signs of anarchy, terrorism and radical Islamic militancy is once again returning in Bangladesh. With the next general election scheduled to be held on December 30, members of ruling Awami League are coming under attacks in various parts of the country. Armed jihadists belonging to Jamaat e Islami Bangladesh (JIB) and Bangladesh Nationalist Party (BNP) have started attacking the leaders and activists of Awami League and its other front organizations. Agenda of JIB-BNP nexus is to push Bangladesh towards a civil war. According to numerous reports, Pakistani spy agency Inter Service Intelligence (ISI) is actively helping the JIB-BNP nexus in returning to power thus re-establishing Pakistan’s influence on Bangladesh.

According to counterterrorism experts and US security agencies, Jamaat-e-Islami is connected to militancy groups while Bangladesh Nationalist Party also is seen a jihadist entity.

Bangladesh first received the group of skilled jihadists during 1979-1989, as the mujahidin from the Afghan battle fields started returning. On return to Bangladesh, these jihadists formed Harkat-ul-Jihad-al-Islami-Bangladesh (HuJI-B) in 1992 with a similar ideology of Harkat-ul-Jihad-al-Islami-Pakistan (HuJI-P). Bangladesh Nationalist Party considered HuJI-B as its ideological allies and both promotes radical Islam. Taking the advantage of a “friendly government” in power, HuJI-B started gaining strength and expanding its network by recruiting newer batches of jihadists in Bangladesh.

Jihadist party BNP patronized HuJI-B, with the mission of introducing Sharia rule in Bangladesh and carried out 13 bomb and grenade attacks in six years since 1999. At least 109 people were killed and more than 700 were injured. Its first bomb attack at the Udichi (a cultural organization) program in Jessore on 6 March 1999, killing 10 and leaving over a hundred critically injured.

In 2000, HuJI-B planted a 76 kilogram bomb at a rally venue of secularist Awami League president and Prime Minister Sheikh Hasina at Kotalipara of Gopalganj with the plot of assassinating the Prime Minister.

On 14 April 2001, Huji-B was responsible for bomb blasts at the Ramna Batamool in Dhaka during a program. This is an annual cultural event organized by the secularist individuals to welcome the Bangla new year.

On 21 May 2004, it carried out grenade attack on the then British High Commissioner Anwar Chowdhury at the shrine of Shahjalal in Sylhet.

Bangladesh experienced the most heinous and gruesome grenade attacks on August 21, 2004 at the rally of Awami League where Sheikh Hasina, then leader of the opposition was present. Several people, including Ivy Rahman, a senior leader of the party’s women wing were murdered along with several leaders and activists of the party, while hundreds of people were injured. This jihadist attack, coordinated and plotted by Bangladesh Nationalist Party (BNP) was like September 9th Al Qaeda attack on the United States.

When BNP returned to power in 2001, another jihadist group named Jamaatul Mujahedin Bangladesh (JMB) was formed, again by ex-mujahedin from Afghanistan and Palestine. This jihadist group had received direct patronization from some of the prominent figures of BNP.

When AQIS was formed in 2014 by Al Qaeda’s kingpin Ayman al Zawahiri (full name Ayman Mohammed Rabie al-Zawahiri), several HuJI-B members offered their allegiance to AQIS and started recruiting, regrouping, reorganizing, and collecting fund for this international terror outfit. HuJI-B members even offered its jihadists as suicide squad member of Al Qaeda. BNP’s second-in-command Tarique Rahman (son of Khaleda Zia) was maintaining liaison with some top brasses of the HuJI-B and was providing fund and logistics.

Former lawmaker of Jamaat-e-Islami, Riasat Ali Biswas told the parliament on 11 September 2005 “Reports of militant training of Jama’atul Mujahideen Bangladesh (JMB) and Harkatul Jihad to turn Bangladesh into an Islamic state are nothing but propaganda.”

Under such lenience and denials and patronization from the ruling party, HuJI actively spread its armed wing within the madrasas and set up training camps in the greater Chittagong and three hill districts.

In 2002, the US State Department blacklisted HuJI as an international terrorist outfit which had forced BNP in taking some actions against HuJI. Later, BNP was forced to ban HuJI-B at the pressure of the US administration.

BNP government sent Mawlana Tajuddin (one of the HuJI kingpins) to Pakistan in 2006 with the help of government officials. Later Tajuddin went to South Africa and stayed there up to 2016-2017. It is learnt from different statements of HuJI-B leaders that Pakistani spy agency ISI had an influence over HuJI-B. ISI used to recruit people from Bangladesh, gave them training in Pakistan and sent them back to India and Bangladesh with directives of jihadist attacks.

Being influenced by these jihadist groups, BNP remained silent on the atrocities on the Ahmadiyas. Notorious groups such as Khatmey Nabuwat Movement, Khatmey Nabuwat Andolan, Ahley Hadis etc began unimaginable atrocities on the Ahmadiya religious minority group while BNP had enthusiastically banned the religious publications of the Ahmadiyas, including their holy scriptures. When international community stated putting pressure on BNP for such nefarious actions, the party started playing foul with the international community denying the ban on the publication. But, till date, that ban has not been lifted. During this period, anti-West and pro-Caliphate groups like Hizbut Tahrir (HT) and Hizb Ut Towheed (HuT) had emerged and continued activities.

Emergence of another jihadist group:

During 2004, another notorious jihadist group named Jamaatul Mujahedin Bangladesh (JMB) came into the radar of the media, when its kingpins Shaikh Abdur Rahman and Siddiqul Islam alias Bangla Bhai started murdering leftist activists in the southern part of the country.

Jamatul Mujaheedin Bangladesh (JMB) was established in 1998 with the ideology of global terrorist outfit Al Qaeda and Shaikh Abdur Rahman became the founder Ameer of the organization. JMB denounces democract, empowerment of women and promotes Caliphate. It carried out many devastating terrorist attacks at Cinema hall (Mymensingh, 2002), Court premises (Chattogram, 2005), Court premises (Gazipur, 2005), 63 districts together (2005) to show their presence in all over the country. JMB involved in targeted killings and sabotage activities during BNP-Jamaat alliances.

BNP and its jihadist nexus:

Founder of BNP, Maj Gen Ziaur Rahman was enthusiastically pushing his agenda of transforming a secular Bangladesh into a Muslim Bangladesh. One of the key ideologies of this party is to appease and promote radical Islam and jihad. With such notorious agenda, BNP has been leading the nexus of pro-Islamist, pro-Jihadist and anti-US forces in Bangladesh. Here are descriptions of some of the coalition partners of BNP:

Islami Oikya Jote (IOJ) leader Mufti Shahidul Islam is an Afghan returned mujahedin. He is accused of having connections with various militancy groups, including Al Qaeda. He also is running an Islamic charity named Markajul Islam, which receives fund from the dubious Afro-Arab sources. With his agenda of promoting radical Islam in the West and radicalizing Muslims in that country, Mufti Shahidul had established a Koranic madrassa in the New York City.

Shahidul was elected Member of Parliament from Narail-2 constituency on BNP-led four-party alliance’s ticket. He was arrested in 1999, for his involvement in bomb attacks on an Ahmadiya mosque in Khulna that killed eight people.

Following his release, Shahidul Islam secretly left Bangladesh and reportedly roamed in Afghanistan, Pakistan and some African countries. On his return in 2001, after the AL handed over power to a caretaker government, Mufti Shahidul Islam joined the IOJ.

BNP affiliation with Shaheed Hamza Brigde (SHB) carries a clear testimony of its anti-nationalistic and pro-jihadist mindset and its stand against secular Bangladesh. BNP, JI and ICS jointly and deliberately planned and formulated a new and very aggressive terrorist organization named Shahid Hamza Brigade (SHB) in 2012. The objective of this militancy outfit was to foil the investigation process of War Criminals and disrupt the functioning of International Crimes Tribunal (ICC).

Under the leadership of Prime Minister Sheikh Hasina, several operations were launched against Shahid Hamza Brigade during February 2015 to April 2016 at different places in Bangladesh. Total 34 members of SHB were apprehended while 22 weapons, 4,475 rounds of ammunition, 150 kilo grams of explosive materials as well as physical training materials were seized.

A series of Operation were launched since Feb 2015 to April 2016 at different places and total 34 militant members were apprehended including huge recovery of Arms-22, Ammo-4475, IED-18, explosive material-150 kg including physical training materials.

BNP and its jihadist allies are out of the mainstream politics for more than 10 years. But its recent approach to participate in the upcoming general election (scheduled to be held on December 30) and type of candidates it has nominated indicates the same unholy agenda of the party of promoting militancy and terrorism.

Should Bangladesh become another jihadist launchpad?

The December 30 general election is extremely crucial for Bangladesh. Activists of BNP, Jamaat-e-Islami and their jihadist allies have already started attacking members of ruling Awami League in different parts of the country chanting ‘Allahu Akbar’ slogan. Political analysts and counterterrorism experts are seeing this as hijacking of Bangladesh by the jihadists and anti-US forces. People of Bangladesh are already feeling extremely worried as some media reports claim, Pakistani security agency Inter Service Intelligence are actively helping BNP-Jamaat nexus in returning to power. BNP-Jamaat nexus are trying to attract voter’s sympathy by playing Islam card similarly as Turkish President Recep Tayyip Erdogan. If this nexus returns to power – Bangladesh may turn into another jihadist launchpad. This will put regional and international security at stake. Particularly it will seriously hamper India’s national security as BNP-Jamaat nexus would export terrorism to India and beyond. It will also pose grave threat to the United States as there are several dubious organizations run by Jamaat-e-Islami in that country.

Most importantly, predictions on the possible result of the December 30 general election is extremely worrisome. Because, it is anticipated that, a major segment of the half-educated, uneducated and madrassa-educated voters  may cast their votes in favour of BNP-Jamaat candidates.

President Donald Trump is clearly against radical Islamic militancy. Saudi Crown Prince Mohammad Bin Salman is also opposing Islamist militancy. On the other hand, China is combating its homegrown Uyghur Islamists. We need to remember a serious point – there are almost one million Rohingya refugees in Bangladesh. Most of us are aware of the Arakan Rohingya Salvation Army (ARSA). What will happen, if BNP-Jamaat, with the help of Pakistani ISI starts giving clandestine support, funding and logistics to the members of ARSA? What will happen, if BNP-Jamaat nexus allows ARSA in recruiting fighters from within the Rohingya refugees? Can the world afford to combat a new monster of few hundred thousand members? Can we afford to let another ISIS or much lethal jihadist group emerge from Bangladesh under the patronization of BNP-Jamaat nexus? Such grave risks are valid if BNP-Jamaat returns to power – “somehow — anyhow.”