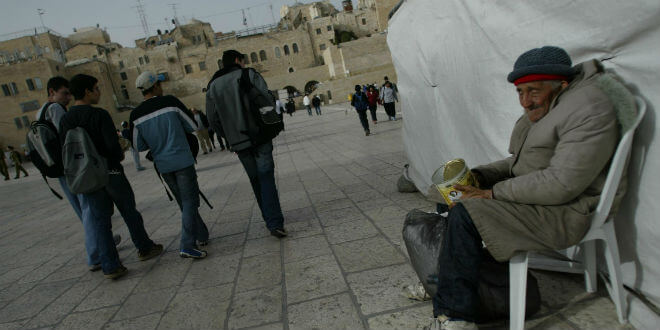 Till you grow old, I will still be the same; When you turn gray, it is I who will carry; I was the Maker, and I will be the Bearer; And I will carry and rescue [you]. Isaiah 46:4 (The Israel Bible)

Many of Israel’s Holocaust survivors who endured the horrors of the Shoah are now living through another heartbreaking calamity: poverty.

According to the Foundation for the Benefit of Holocaust Victims in Israel, there are 215,000 Holocaust survivors living in Israel, of which more than 20 percent are living below the poverty line, as compared to 13.1 percent of Israel’s Jewish elderly population.

Expensive medical issues, lack of access to rights and compensation and the rising cost of living likely explain this discrepancy – especially for those who are too old to work.

Yair Assaf-Shapira, researcher at the Jerusalem Institute for Policy Research, told Breaking Israel News that according to recent data from Israel’s Central Bureau of Statistics survey, some 14% of the elderly population makes food concessions, 13% give up medications, and 12% give up medical treatments due to economic difficulty.

The Bible teaches taking care of those less fortunate and respecting the elderly.

We read in Isaiah 58:10, “If you pour yourself out for the hungry and satisfy the desire of the afflicted, then shall your light rise in the darkness and your gloom be as the noonday.”

Similarly, we learn from Proverbs 28:27, “Whoever gives to the poor will not want, but he who hides his eyes will get many a curse.”

And about respecting our elderly: “Stand up in the presence of the elderly, and show respect for the aged. Fear your God. I am the LORD” (Leviticus 19:32).

Honoring Holocaust survivors can be done by providing them with a hot meal during the holidays. With fewer family members than their peers, equating to less support, meals and social interaction are especially important for them compared to the general elderly population.

Meir Panim, an organization fighting poverty in Israel through programs for Israel’s elderly, poor and people with disabilities, not only offers food for the elderly – so they do not have to give up meals in the face of economic challenges – but their volunteers also visit their homes, offering social interaction and connecting them with other organizations who can help.

During the holidays, Meir Panim ensures that each Holocaust survivor they serve has food for the holidays, delivered to their homes, as their restaurant-style soup kitchens are closed. Doing so can drastically improve the quality of life of these individuals.

Other biblical values such as repairing the world and becoming a light unto the nations are fulfilled through charity and righteousness and are especially important ahead of the high holidays.

According to the daily Aleinu prayer, also a central prayer of Rosh Hashanah, the goal of the Jewish people is to “repair the brokenness in our world by the work of our hands and our hearts,” also called tikkun olam. Acts of tikkun olam can include keeping the commandments, studying Torah, and acting with kindness. Through tikkun olam, the Jewish people become a light unto the nations:

“I Hashem, in My grace, have summoned you, And I have grasped you by the hand. I created you, and appointed you A covenant people, a light of nations” (Isaiah 42:6)

Part of building a model society is taking care of those who are unable to take care of themselves, such as the elderly and impoverished.

One of the primary ways of performing tikkun olam is through giving tzedakah (translated as righteousness and commonly understood as charity). Righteousness is one of the main attributes of God and as man was made in God’s image, righteousness is considered paramount:

“He who strives to do good and kind deeds Attains life, success, and honor.” (Proverbs 21:21)

Tikkun olam and charitable giving are especially important during the high holidays, as righteousness is said to free one of his or her sins before the Day of Judgment, Yom Kippur.

This holiday season, provide a Holocaust survivor with a meal.