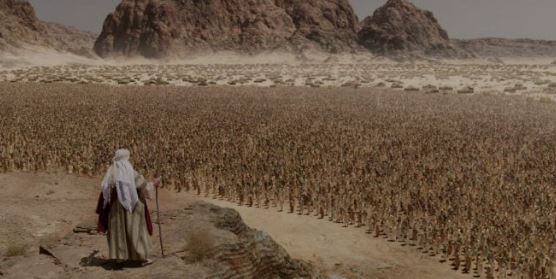 A documentary film will be released in two weeks that asks the question that anyone who reads the Bible wants the answer to: Did Moses really write the holy text? The film is truly a cinematic masterpiece but more importantly, it is the product of a man of faith on a personal quest for truth.

Award-winning filmmaker Tim Mahoney’s drive for the truth led him on a 12-year search for evidence of the Israelites sojourn in Egypt, leaving that land, and then going on to conquer Canaan. This search culminated in his film, Patterns of Evidence: The Exodus, released in 2014. Mahoney intended to continue with a film about the actual Exodus from Egypt but while researching that subject he was confronted with scholarly skepticism of the Bible’s veracity.

“I knew that there would always be this ‘higher criticism of the Bible,’” Mahoney told Breaking Israel News. “Most people encouraged me to avoid this. They thought it was too complicated and daunting a task.”

Mahoney realized that he needed to address this issue before any other; Did Moses really write the Bible?

“Many mainstream scholars entirely dismissed this idea,” Mahoney said. “They suggested that the first books of the Bible were not written by Moses, but were written centuries later by a number of contributors who mixed fact with fiction to create an origin story for Israel. Therefore, they claimed that these biblical accounts are not historically reliable.”

“To investigate the Exodus route, I would need to look at the geographical descriptions and identifications given in the text for the journey, because some these sites might still be locatable. But if Moses didn’t record this, and it was just a later invention, then what would be the point of searching for evidence of the route taken by the people of Israel?”

The first part of the investigation was to determine whether there was a writing system in place at the time of the Exodus that Moses could have used. Most scholars believe that Hebrew did not exist until 900 BCE, after the time most scholars believe the Exodus took place. But Mahoney’s tenacity led him to an alternative alphabet and an alternative timeline. Mahoney found scholars had discovered proto Sinaitic, an alphabetic language similar to early forms of Hebrew. In his previous film, Mahoney suggested a variation on Exodus timeline that placed the Israelites in Egypt in 1800 BCE, much earlier than most scholars had previously asserted.

“This investigation shows that this alphabet showed up in Egypt exactly when I believe Joseph was in Egypt,” Mahoney said. “This early form of writing influenced the message of the Bible.”

Mahoney noted that hieroglyphics and cuneiform are composed of thousands of symbols which required years to learn. It was by nature restricted to an elite. An alphabet composed of fewer than 30 symbols made reading and writing much more accessible.

“This foundational alphabet was a technology that democratized information, allowing it to be widely transmitted,” Mahoney said. “The Bible was given to the entire nation through an alphabetic language.”

The basis for Mahoney’s remarkable films comes from his childhood. Raised in difficult financial circumstances, faith was a mainstay of his everyday life.

“I’ve always believed the Bible was true,” Mahoney said. “We put great confidence in God helping us. When researchers started telling me that there is no evidence that these stories ever happened, that seed of doubt really bothered me. But you need to be honest about these negative voices.”

Mahoney took a chance, investigating the scientific claims against the Bible. He was surprised to find that scientists frequently interpreted the evidence in a specific manner.

“People will ask me if I am trying to prove the Bible,” Mahoney said.”What I am doing is trying to affirm the Bible. I’ve been able to find that there is evidence that the researchers are not sharing, that they are interpreting in a specific way, and that they may even be doing so according to an anti-Bible bias they have. It is a doctrine of unbelief.”

“The problem is that so many people start out accepting these claims against the Bible and end up not believing in God.”

Mahoney places a high value in the Bible and is not questioning its validity. His research actually goes hand-in-hand with his belief.

“One of the truths I have realized over the years is that in reality, faith and evidence make great partners  – believing in God requires faith amidst evidence.” The key here is that evidence and answers can bolster faith and battle doubt. We are supposed to love God with our hearts, souls, and minds. What that means is there’s not a disconnect between these three aspects; there’s not supposed to be some kind of ‘I’m only going to use my faith; I’m not going to use my intellect.’ I started to see that there were many passages that talked about our minds. The Bible doesn’t separate the mind from the heart. They work together; they’re not competing with each other. When they mesh together, then you feel you don’t have this dissonance in your life.”

The film will be released at more than 900 theaters across America for three days only: March 14th, 16th, and 19th. Information about screenings is available on the website.