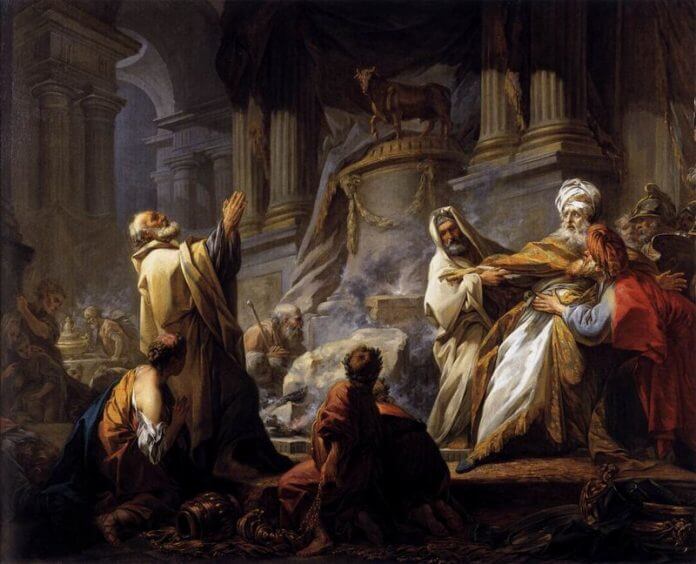 In the penultimate Torah reading, Moses bids farewell to the people of Israel in poetic form, in the Song of Haazinu. It is a dense, compact, prophecy-laden account of the history of the world, from the beginning of time until the end of days. One of its sections deals with Israel’s descent into idolatry and reads as follows:

“You grew fat and gross and coarse- he forsook the God who made him and spurned the Rock of his support. They incensed Him with alien things, vexed Him with abominations. They sacrificed to demons, no-gods, gods they had never known, New ones, who came but lately, who stirred not your fathers’ fears.”

Rabbeinu Bechaye on Deuteronomy 32:17 (Haazinu) based on the verse above, explains that there are three types of idolatry.

The first type of idolatry is purely in the mind. It is the belief, the acceptance, that there may be divinity besides or separate from the One God.

The second type of idolatry, the one classically associated with physical idols, was the worship of statues. Apparently, ancient man was more sophisticated than we may have given him credit for. They didn’t necessarily worship lifeless inanimate objects. Rabbeinu Bechaye claims that they were somehow able to draw on the celestial spirits from the stars and constellations and infuse the hand-made objects with some semblance of life. It was those quasi-alive statues that they originally worshipped.

The third type of idolatry was the worship of demons who originated from the netherworld and in the “waters below the earth.” This, Rabbeinu Bechaye highlights was the lowest, the most despicable and the most disgusting type of idolatry, that even our original idolatrous ancestor, Terah father of Abraham, didn’t mess with. Terah and his family it seems had the power and knew the process to create the second type of idolatry, of infusing statues with a celestial spirit. However, members of the young Israelite nation were drawn to the third, the lowliest type of idolatry.

Moses is warning us, in what was meant to be a song to be remembered throughout our history, to stay far away from all forms of idolatry. We should stay away from the brainy, cerebral, intellectual questioning and disassociation from our One God. We should steer clear from the “classic” worship of statues (whether they are lifelike or not). And we should have nothing to do with the stranger beliefs and practices of demonologists and their ilk.

Let’s stick with the simple, faithful belief in God.

Ben-Tzion Spitz is a former Chief Rabbi of Uruguay and current candidate for Knesset with the Zehut party. He is the author of ten books on biblical themes and over 700 articles and stories dealing with biblical and rabbinic themes at his blog ben-tzion.com. Ben-Tzion is a graduate of Yeshiva University and received his Master’s in Mechanical Engineering from Columbia University.

Like Loading...
Recommended for you:
Continue Reading
Advertisement
You may also like...
Related Topics:Idolatry, Idolatry was the worship of demons, Terah father of Abraham, There are three types of Idolatry