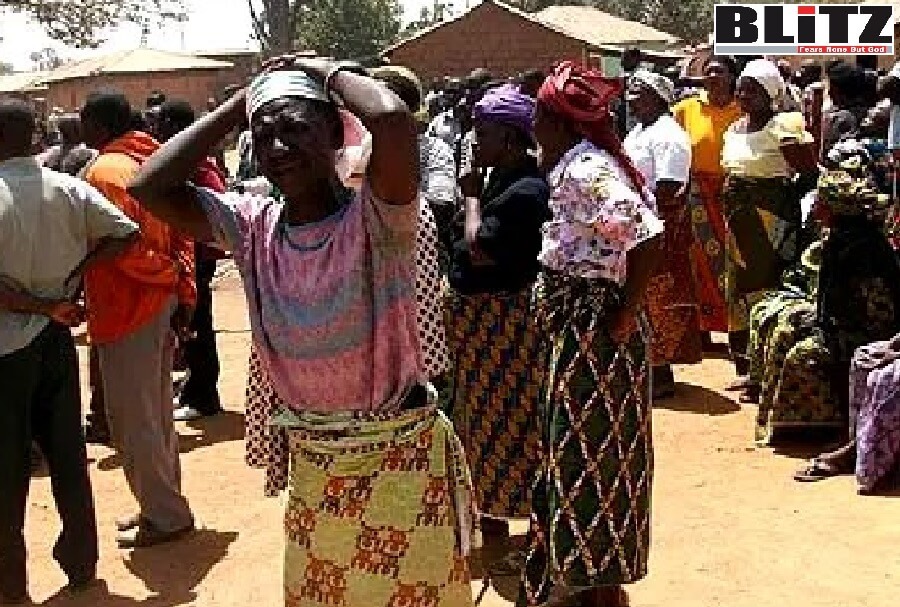 “Perversely these black lives do not matter to Black Lives Matter nor to any footballers, the Premier League or Sky TV who promote anti-racism and BLM but ignore genocide on black Africans. It would be an understatement to say that footballers are stupid – they don’t reach the intellectual capacity of retarded amoebas and as for the media the biased reporting is paralleled only by the professional incompetence of those who report and present the news across all MSM.

“However, this could be rectified within hours …. let’s call the victims Palestinians and the perpetrators Zionists and bet you a pound to a penny there would be saturation coverage from MSM”.

Clicking on the Facebook post link that Peter Baum has provided on his tweet gives a horrific description of Islamist genocide of indigenous, black African Christians in African continent. Here is the full text:

The spate of killings in Plateau State requires urgent action, otherwise, it will degenerate into anarchy.

This attack is just one of the numerous incidents within the last few weeks and part of the ongoing crisis that has engulfed Plateau State for over two decades now.

Plateau, once described a peaceful State has gone in flames and there seems no end in sight to this turmoil.

Last two weeks the state government, just like in the past, imposed a twelve hour curfew to avert the killings but the situation hasn’t changed.

Tension between Christians and Muslims has been widely identified as the major cause of the feud in the state.

Majority of the Christians who are indigenous and constitute over seventy percent in the state do not share the same values with the Muslims who recently migrated into the area within the last one hundred years.

Sadly, the lawmaker got it wrong just like most indigenes of Plateau State and this is why they would continue to be the main victims in this scrimmage.

Expecting the federal government to resolve a crisis is like waiting for a cold day in hell.

History has shown that the federal government has never intervened in any matter across the country that resulted in justice.

At most, the intervention may douse the tension for a short while and the problems would reoccur.

Take a look at the high rate of poverty, unemployment, mass illiteracy and the cry of marginalization and injustice by different groups since the inception of the country.

The federal government only represents the interest of a few people and this is mainly why many Nigerians just like myself have come to conclusion that the country can never work.

I am not a pro Biafra or Oduduwa separationist but from a place also referred to as Middle Belt or Northern Nigeria.

Unlike most of my counterparts in the Northern part of the country, long before now, I came to realize that Nigeria is a scam.

How do you expect a Fulani president to care about the interest of the indigenes of Plateau State when his kit and kin have a different agenda?

How do you expect a Muslim army general to effectively protect Christians when his folks have been accusing Christians of marginalizing and killing them?

It is on record that the Christian Association of Nigeria, CAN, has accused the Nigerian army and other security agencies of gross incompetence and abetting the Hausa Fulani Muslims in carrying out genocide against Christians in Plateau State.

Yet these Christians and indigenes of Plateau State believe someday the Hausa Fulani Muslims will wake up and be fair to them?

I cry in Langtang!

Former governor of Plateau State, Mr Jonah Jang in an interview with newsmen some years ago described the 1999 constitution as a fraud and said “only God Can End Jos Crises”.

Herein lies another misconception by many Christians not only in Plateau State but across Nigeria.

They have been waiting on God to redeem them from the crisis bedeviling the country and this is just like praying for river to gush out in the Sahara desert.

If the Jews had waited on God to protect them from the Arabs they would have been completely annihilated in the Middle East.

If the Christians in Europe had waited on God to protect them after Sevilla was conquered by Umayyad Empire in the 8th Century, Muslims would have overran them.

At least, the Bible teaches that faith without works is dead.

It took the Jews hundred of years to realise that they needed their own state to protect themselves otherwise they could be completely wiped out and thankfully it was not too late.

If not for the horrors of holocaust between 1941 and 1945, the Jews would not have realised the significance of having a state.

The primary purpose of a state is to protect lives and property but unfortunately Nigeria has failed.

The sad truth is that Muslims can never live peacefully with other people who do not share the same views with them.

Look at the plight of Christians in Borno and Yobe State, Egypt, Pakistan, Iraq, Syria, Central Africa Republic, Jordan and Lebanon amongst others and you will feel sorry for them.

It is not only Christians who are victims of persecution by Muslims, atheists, Hindus and Jews have suffered the same fate.

In fact, a study of how Muslims dealt ruthlessly with indigenes in what is today referred to as Nigeria prior to the coming of the British will leave you dripping with tears.

Uthman Dan Fodio was a terror to the Hausa pagans.

Umaru Nagwamatse who conquered parts of present Niger, Kaduna and Nasarawa state was a serial killer and rapist who did not spare any of his victims.

The Hindus realized this shortly after Independence from the British and decided it was in their own interest to be separated from the Pakistanis, or else, their survival will be threatened.

The only option left for Christians in Northern Nigeria is disintegratration so they can own their state to protect themselves.

Plateau State which is bigger than the size of some countries in the world can be nation on its own.

At best, they could come together and form an alliance among themselves or other none Hausa Fulani groups in Nigeria to create a separate country.

There is an ongoing jihad in Nigeria and nothing will stop Muslims from accomplishing their aims except disintegratration.

This is why they preach one Nigeria in open but when they converge in their mosques, they do not see others as part of them.

Jihad which simply means holy war occupies the mind of a typical Muslim.

The concept of Jihad was designed by the founders of Islam to dominate the world through wars and conquest and it is one of the reasons why Muslims will never be satisfied until they completely decimate Christians and other groups in Nigeria.

I have made frantic attempts to convince none Muslims in Northern Nigeria to consider separation as the only alternative to their survival and progress.

I started during my final year in the university and they never took me serious.

I tried to use the internet to convince them to accept my views but in most cases they insult me.

Three months ago, I was removed from a group on Facebook created by people from Jos for airing my views.

I keep asking myself, what is wrong with none Muslims in the North?

Is it that they don’t read or have been brainwashed to think that Nigeria is the only option?

I might sound bias but history is the best teacher.

The attitude of none Muslims in the North is similar to that of their counterparts in ancient Middle East and North Africa immediately before the advent of Islam.

These places were once dominated by none Muslims but the story is different today.

I just hope people of Plateau State and other minority groups in the North realize the truth before it is too late.

As Peter Baum has written “Mainstream media refuses to cover the genocide inflicted on indigenous, black African Christians by Islamists”, I am drawing attention of the international media on this extremely important issue.