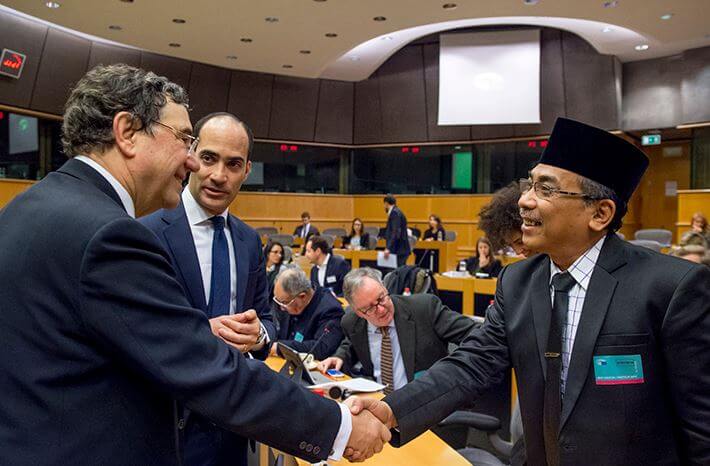 Visiting in his capacity as a member of Indonesia’s Presidential Advisory Council, with a protocol rank equivalent to Minister of State, Mr. Staquf delivered a heavily-attended speech urging Europe’s centrist politicians to halt the rapidly accelerating polarization of European societies by acknowledging and addressing legitimate concerns raised by populist forces about the nexus of national and international security threats linked to Islam, terrorism and migration.

Speaking at a European Parliament Joint Meeting entitled “Innovative Approaches to Preventing and Countering Violent Extremism,” Mr. Staquf explained that “Islamist radicalism and terror continue to exert a strong appeal to many Muslims, because of the fact that these are directly linked to obsolete and problematic tenets within classical Islamic law (fiqh, often conflated with shari‘ah), which Muslims generally regard as an authoritative source of religious guidance.” Mr. Staquf urged the audience, which included MEPs and policy experts affiliated with the European Parliament’s center-left grouping—the Progressive Alliance of Socialists and Democrats (S&D)—to “engage in frank discourse about these problematic tenets of Islamic orthodoxy, while encouraging Muslin religious authorities and Middle East governments to boldly acknowledge and reform them.”

The center-right European People’s Party (EPP) think tank—the Wilfried Martens Centre for European Studies—hosted Mr. Staquf the following day at the Brussels Security Forum, the third edition of the World Security Forum, a closed, invitation-only platform where political leaders, officials, experts and practitioners discuss complex and enduring national security challenges. Mr. Staquf highlighted the need to “address issues related to Islam and migration that are fueling populism… and to supply a coherent vision, strategy, methodology and message to mainstream politicians who wish to address the growing problem of radicalization from a humanistic, tolerant and moderate perspective.”

Mr. Staquf critiqued Western governments’ tendency to ignore and even deny the obvious theological roots of violent and non-violent Islamist extremism. Mr. Staquf’s penetrating remarks—regarding “analytical surrender and the consequent failure of governments to accurately diagnose the root causes of Islamist extremism”—validate discussions that have recently emerged at the heart of the EU itself. These developments reflect the fact that “the multi-billion-euro P/CVE (“Preventing/Countering Violent Extremism”) industry has proven ineffective, due to flawed root cause analysis, while religious supremacism, separatism and violence continue to spread.”

The European Union Court of Auditors stated, in its “Special report n°13/2018: Tackling radicalisation that leads to terrorism” that: “The [EU] Commission does not evaluate its overall success in achieving policy goals… The Commission has not: broken down the overall objectives of its counter-radicalisation policy into more specific and measurable objectives; established appropriate indicators and targets for EU funds used, in order to measure performance in addressing radicalisation; [nor] provided a comprehensive overview of EU-financed counter-radicalisation actions.” The Court of Auditors report also states that “Commission actions to… address radicalisation often measure achievements in terms of amount of activity (e.g., the number of meetings held or documents produced) rather than effectiveness.”

On December 12, 2018—the day after an Islamist attack on the Strasbourg Christmas market, whose whose highly symbolic target selection evidenced a clear religious motivation—the European Parliament adopted a “Report on Findings and Recommendations of the Special Committee on Terrorism,” with 474 votes in favour, 112 against and 75 abstentions. MEPs Monika Hohlemeier (EPP) and Helga Stevens (ECR) served as co-rapporteurs, with substantial input from Ana Maria Gomes (S&D). This report addressed the issue of religious extremism—also described in the report as ‘Islamist extremism,’ ‘Radical Islamic Fundamentalism,’ ‘Wahhabism,’ ‘Salafism’ and ‘jihadism’—with unprecedented clarity, regarding both the nature of the threat and measures necessary to prevent Islamist terrorism.

Acknowledging the sensitive and highly controversial nature of these issues, Mr. Staquf offered NU and PKB’s assistance to European political parties and the nations they govern. “Meeting this unprecedented global challenge requires understanding the nature and scale of the threat we face; encouraging members of society to openly discuss these issues; and enabling political elites to act assertively and decisively, by building societal consensus.”

Mr. Staquf’s Brussels visit is part of a systematic effort by the spiritual leadership of the Nahdlatul Ulama—who are  spearheading  a  Humanitarian Islam movement—to expand the range of acceptable political discourse about Islam in Europe and to address legitimate national security threats, while tempering the dangers inherent within populism.