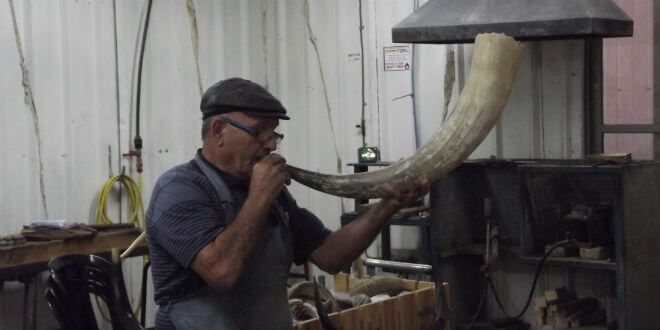 [Say this:] “All you who live in the world And inhabit the earth, When a flag is raised in the hills, take note! When a shofar is blown, give heed! Isaiah 18:3 (The Israel Bible)

The month of Elul marks a period of preparation leading up to Rosh Hashanah (the Jewish New Year) and, ten days later, the holiday of Yom Kippur (the Day of Atonement). The primary tool to aid Jews in preparing for repentance is the shofar, a specially prepared ram’s horn, which is blown every weekday of the month during morning prayers. It is the focal point of the Rosh Hashanah service and is blown at the end of Yom Kippur.

The first case of a shofar being used to awaken the Jews to serve God preceded the giving of the Torah at Mount Sinai.

On the third day, as morning dawned, there was thunder, and lightning, and a dense cloud upon the mountain, and a very loud blast of the shofar; and all the people who were in the camp trembled. Exodus 19:16

Rosh Hashanah is referred to in the Bible as zikaron teruah (a memorial of shofar blasts).

Speak to B’nei Yisrael thus: In the seventh month, on the first day of the month, you shall observe complete rest, a sacred occasion commemorated with loud blasts. Leviticus 23:24

The shofar was also unique in being used to announce the jubilee, once every 50 years.

The shofar was also blown in times of war, most notably when Joshua besieged and then conquered Jericho.

When Yehoshua had instructed the people, the seven Kohanim carrying seven shofarot advanced before Hashem, blowing their shofarot; and the Aron Brit Hashem followed them. Joshua 6:8

In recent times, Rabbi Shlomo Goren, the chief rabbi of the IDF, blew a shofar after the battle in the 1967 Six-Day War in which Israel conquered the Temple Mount.

According to Jewish tradition, Elijah the prophet will re-appear just before the Messiah. Elijah will anoint the Messiah and announce his arrival with blasts on a shofar. The Yochanan Ben Zakkai Synagogue in Jerusalem’s Old City has a shofar and flask of oil on a high shelf waiting for Elijah’s use. This pre-Messiah shofar blast is prophesied to also awaken the dead.

All you who live in the world And inhabit the earth, When a flag is raised in the hills, take note! When a shofar is blown, give heed! Isaiah 18:3.

In preparation for Rosh Hashanah, Breaking Israel News visited Kol Shofar in Givat Yoav in the Golan, where Shimon Keinar has been making shofarot for 17 years.

All animals that are kosher to be eaten (i.e. split hooves and chew their cud) can be used for making a shofar if they have horns. The only exception is a cow, whose horn may not be used as a shofar. Coincidentally, horns from permissible animals are not solid bone but have cartilage inside making it possible to hollow them out. One explanation is that a cow’s horn will remind God of the Sin of the Golden Calf. A ram’s horn is traditionally used on Rosh Hashanah as a reference to the Binding of Isaac.

When Avraham looked up, his eye fell upon a ram, caught in the thicket by its horns. So Avraham went and took the ram and offered it up as a burnt offering in place of his son. Genesis 22:13

Yemenite Jews traditionally use a shofar from a Kudu, a type of African antelope, with a particularly long and twisted horn.

Other horns that are commonly used come from antelopes, gazelles, goats, and Rocky Mountain goats. The animal does not have to be ritually slaughtered in order for its horn to be used as a shofar.

The horn needs to be dried out to separate the cartilage from the bone.

After drying, the shofar needs to be boiled in water for between two and five hours. Add a bit of  washing soda can help with later cleaning. The cartilage can then be removed using a pick.

Use a flexible wire to check how far the hollow inside the horn extends. Make a mark on the outside of the Shofar about one inch further along than where the hollow ends. Cut off approximately one inch from narrow tip with a saw. It is important to make sure that the horn is completely dry before cutting it.

Drill into the sawed-off end a hole of 1/8 inch using an electric drill until the bit reaches the hollow of the horn.

Use the rounded drill bits to carve a bell-shaped mouthpiece at the end of the shofar. The edge of the mouthpiece can be smoothed. Keinar tunes each shofar, adjusting the tone and timbre by shaping the mouthpiece.

What makes a Shofar Unfit for Ritual Use:

There must be no holes or splits on the sides of the shofar. Paint or metal adornments render the shofar unfit for ritual use. The shofar may not be fitted with a mouthpiece. Shofarot appeared prominently in the Temple service and for some uses were fitted with silver mouthpieces, though for other purposes this was not allowed.

The outside of the shofar may be polished or engraved but nothing can be glued or attached to it, even if it is made from the same material.

It is forbidden to blow the shofar on Shabbat and it is, in fact, muktzah (forbidden to pick up or carry). This is true even when Rosh Hashanah falls on the Sabbath, in which case the shofar service is read but without the shofar being blown.

For ritual purposes, only one shofar may be sounded at a time.

Keinar, a religious Jew, makes thousands of shofarot each year, selling most of them from his showroom in the Golan. He runs tours in which he explains his craft. He noted that in recent years, many shofar suppliers have chosen to import from Morocco and other countries rather than from Israel.

“Though a shofar made by a non-Jew or non-observant Jew is entirely kosher, I believe that it is better when a shofar is made by a Sabbath-observant Jew,” Keinar said. “The voice of the shofar is intended to pierce into the inner depths of the heart and soul. This is highly personal and is best done by a God-fearing Jew.”

“I don’t understand this but I certainly don’t object,” Keinar said. “There is no prohibition in the Torah that prevents non-Jews from blowing the shofar and if it wakes them up to serve Hashem (God, literally ‘the name’), it can only be a good thing.”

Like Loading...
Continue Reading
Advertisement
You may also like...
Related Topics:According to Jewish tradition, Animals kosher for shofar, Elijah the prophet will re-appear just before the Messiah, Riosh Hashanah is referred to in the Bibles