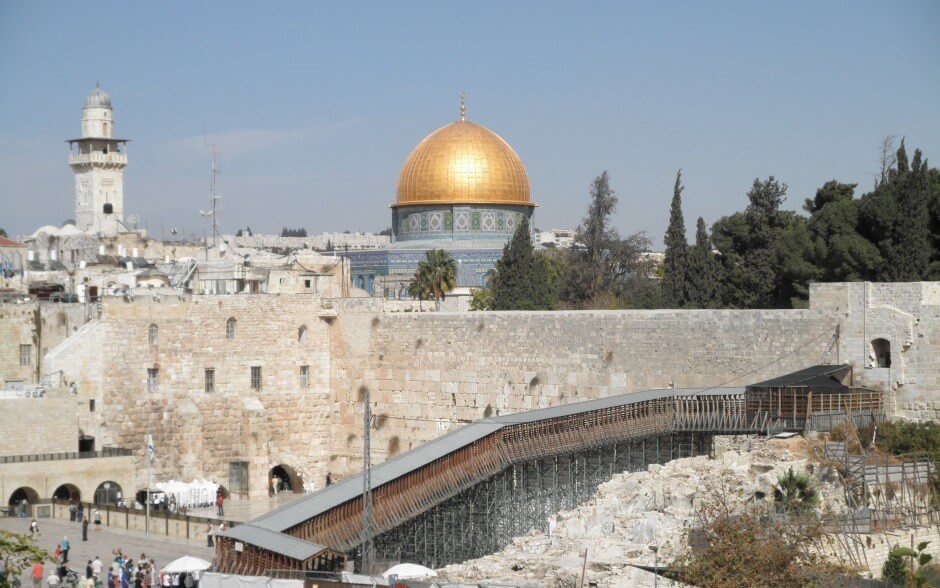 “Perched up on a hill in the Old City of Jerusalem, along the fragile border between the Jewish and Muslim Quarters, is our home,” writes Michal Ronnen Safdie at the start of her ethereal new book of photographs, “Under My Window.”

Her husband, renowned architect Moshe Safdie, was involved with the renovation of the Jewish Quarter after 1967, including the restoration of a ruin that eventually became their home.

From their arched window they can see nearly all of Jerusalem’s sacred sites. But what began to interest Safdie was the view under the window — of a narrow alley, through which “thousands of people pass every day.” The alley is a conduit through which Jews, Muslims and Christians go about their daily lives. “My window over this spot is like a premium box in an opera house overlooking the stage — displaying a constant performance of the theater of life of Jerusalem.”

Setting up her camera on a tripod, Safdie captures images of this complex mosaic. Pointing her lens toward the Western Wall precinct, Safdie captured the vast ceremonial spaces and the majestic silhouette of the Old City quarters. Focusing below, in the alley and terraces, she documents a great variety of people either seeking the sacred or carrying out mundane tasks of daily life.

“It is the social and physical layering that interests me, the communal and the private ‘rooms’ of the city” — a layering of architecture and people, private courtyards and vast public spaces. Woven among the scenes of prayer, celebration and ceremonial events are images of couples in awkward romance, children at play, and residents reading, texting, hanging linens and carrying groceries.

Safdie shows that, despite all the ugly words said about Israel on any given day, coexistence exists. Right there. Under her window. Although, it exists warily. “No scene is innocent in Jerusalem,” Safdie writes. “Every interaction is more than what it appears to be.” Scenes are “rampant with tension,” not just between Jews and Muslims but between Jews and Jews, the Orthodox and the secular.

“Within my house there is no escape from what transpires outside,” she writes. “It is an ever-engaging experience, and it penetrates my home as soundwaves: of church bells, of the sounding of the shofar, the susurration of thousands of people walking to the mosques, a city rooster calling at dawn.”

“Under My Window” is a book of deep, spiritual beauty. The brilliant architectural composition of the photographs fuses with the book’s exquisitely quiet design to create a sacred space that controls the chaos displayed within.

“I have now lived in the house for 40 years,” Safdie writes. “What occurs outside has not become routine, nor do I take it for granted. Each day brings surprises, new revelations, and unexpected moments of wonder. I think about the complexity and the richness of it all. The macro and the micro.

“Why has this particular spot on earth become so meaningful and significant to so many of different beliefs, cultures, and histories?” she asks. “What is the hope, in this city dubbed ‘The City of Peace,’ of ever seeing harmony and reconciliation?”

In both Safdie’s text and the beautiful Introduction by Ari Shavit, terrorist attacks are generally downplayed and the Jewish response to the fear of living with those attacks is overplayed. Thankfully, the politics are subtle enough not to undermine the larger existential questions the book provokes:

What is the meaning of Jerusalem? What is the purpose of the conflict? Both the transcendental beauty and the complex tensions show the ineffable hand of God. But why must so many still suffer in this holy city?

Safdie ends the book with a photo of the Western Wall, with Jews praying on one side and Muslims kneeling on the other. Poet Yehuda Amichai, writing about the photo, has the last word: “They seem to be on the same level, and their equality is the equality of God and may be a glimpse of hopeful peace.”

Karen Lehrman Bloch is an author and cultural critic.

Like Loading...
Continue Reading
Advertisement
You may also like...
Related Topics:A city rooster calling at dawn, Jews and Muslims, No scene is innocent in Jerusalem, The susrrration of thousands of people, Walking to the mosques