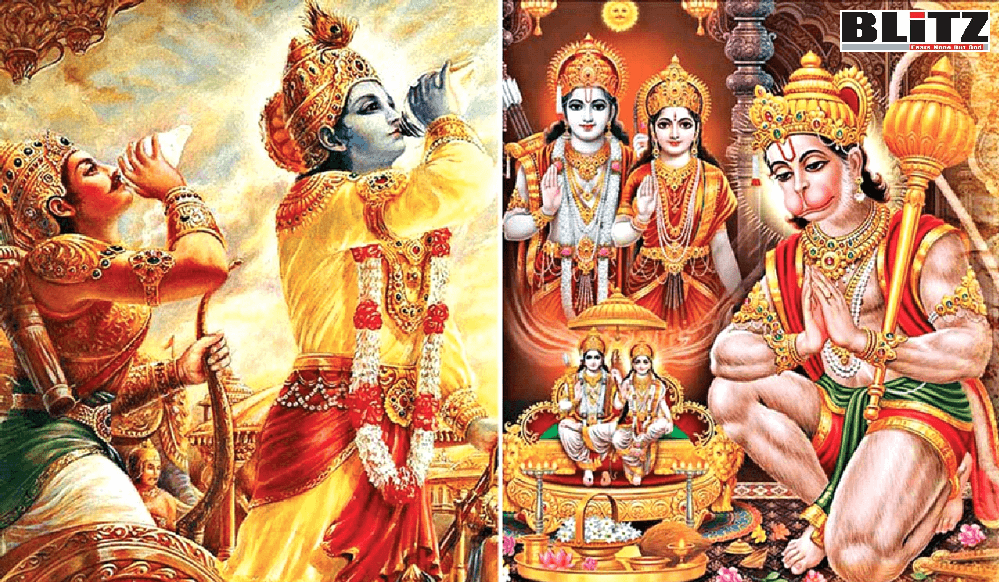 Different shades of meaning of the word ‘Arya’were elaborated in the previous article. In addition, some illustrative examples of the terms Arya and Dasyu in the Vedic literature have been put forward. These quotations are undoubtedly the earliest in chronology as they belong to the actual Vedic scripts. Let’s also take a quick look at where the word ‘Arya’ is found in later Sanskrit literature, and if so, in what sense.

The two epics Ramayana and Mahabharata are ‘composed’ by sages. Unlike the Vedic mantras, they are not ‘beholden’ or ‘inspired’ by these enlightened souls. That is why these compositions are called ‘Aarsh (composed by sages) epics’. There are numerous references to the word ‘Arya’ (original Sanskrit word) in the Ramayana and Mahabharata as well. As discussed earlier, since the word ‘Arya’ stands for the embodiment of virtues, while referring to any revered, venerable, virtuous person, it would be a regular practice to use ‘Arya’ if it is a man and ‘Aarya’ if it is a woman. The word has been used abundantly in every situationthat it appears twice in a short span in the very first canto (adhyaya) of the Balakanda in the Ramayana. In this, Devarshi Naradamuni is narrating Rama’s story briefly to Maharshi Valmiki. Describing Shri Ram in it, Narada says, सर्वदाभिगत: सद्भि: समुद्र इव सिन्धुभि:। आर्य: सर्वसमश्चैव सदैक: प्रियदर्शन: Valmiki Ramayana 1.1.16.

It means that as rivers stride towards the sea, cultured people gets attracted towards Rama. Rama is referred as ‘Arya’, meaning virtuous and he has sense of equalness for all. So his mere sight pleases everyone.”

In the Ramayana, Rama is often described as ‘Arya’ and there is nothing special about it. But even the ‘apes’, living in the forests and hills are called ‘Arya’ in Ramayana! Glance at what description is found in Kishkindhakanda of Valmiki Ramayana. When Rama kills the ungodly king Vali of Kishkindha,his widow, Tara mourns at his death.

सुप्त्वैव पुनरुत्थाय आर्यपुत्रेति क्रोशती । रुरोद सा पतिं दृष्ट्वां संदितं मृत्युदामभि: || Valmiki Ramayan 4.19.27. Meaning – “(By looking at the dead Vali) As if recovered suddenly from sleep, she began to exasperateby uttering ‘Hey Aryaputra’ when she witnessed her husband tied in a death trap.”What wonder! Vali’s wife Tara, who is an ‘ape’, calls her husband ‘Aryaputra’!While lamenting, she saw Rama cladded in hermit’s dress and started walking towards him. Describing the occasion, Valmiki says,

आज्ञापयत् तदा राजा सुग्रीव: प्लवगेश्वर:। और्ध्वदैहिकमार्यस्य क्रियतामनुकूलत: || Valmiki Ramayana 4.25.30. Meaning- “After that, Sugriva,king of the apes ordered that the last rites of ‘Arya’ Vali should be performed properly.”Here even King Sugriva calls his ape brother as ‘Arya’! Elsewhere in the Ramayana also, Hanuman (ape god) and Jambuwant (genius bear) are referred to as ‘Arya’.

Where was this kingdom of Kishkindhalocated? The then Kishkindha was the site of the medieval state of Vijayanagar and in today’s context,it is Hampi (Karnataka)and its environs. That wasobviously the ‘Dravidian’ region in South India, and definitelynot the one situated at Indus or Saraswati River in Northward Punjab. But here these people are seen calling each other ‘Arya’, and not ‘Dravid.’ Was the ape-queen Tara or her husband Vali orhis brother Sugriva all part of the so-called ‘Aryans’ gangs who came from Central Asia on the banks of the Indus in 1800 BC?During their time, this history propounded by the Western researchers was not available, so most of apes from Kishkindha must have been ‘ignorant’ about their origin!

If all this is not sufficient, even in the far south, in Lanka, Ravana, the king of demons, calls his wife ‘Aryaa’. All the wives of Ravana address him ‘Aryaputra’.Although demon, he is great in their eyes; hence he is an ‘Aryaputra.’When Ravana was killed by Rama in battle, all these women started mourning. Describing the occasion, Valmiki says,आर्यपुत्रेति वादिन्यो हा नाथेति च सर्वश: । परिपेतु: कबन्धाङ् कां महीं शोणितकर्दमाम् || Valmiki Ramayan 6.110.4. Meaning- “(While) weeping as ‘O Aryaputra, O Nath’,they all began to wander in the battlefield (looking for Ravana) where the headless corpses were lying and the blood was muddy. “Undoubtedly Lanka is south of India and Ravana is Arya there too. So did these so-called ‘Aryans’ from northwestern India reach as far south as Lanka?This history seems to have escaped the notice of so many European scholars and some Indian scholars, pleasedto blindly follow anything that is western. DeclaringRavana as a native, those who hail ‘Jai Ravana’ and raise agitation in various universities, unfortunately for them, Ravana turns out to be uninvited, aggressive and alien ‘Arya.’

Aryans in the Mahabharata

What is true in case of Ramayana is the same with Mahabharata. The word ‘Arya’ appears numerous times in a million verses of the Mahabharata. How many of that should be quoted here! Not every one of us has an epic of such a gigantic size. However the Bhagavad-Gita, a section of the seven hundred verses out of it, is found in almost every Hindu house. Let’s look at an example of that.At the beginning of the war, Arjuna had a sudden and weird thought, ‘What will be achievedby killing my near and dear ones? Better not to have a war at all.’ Then Lord Krishna took him to the task and said,

आर्यपुत्रेति वादिन्यो हा नाथेति च सर्वश: । परिपेतु: कबन्धाङ् कां महीं शोणितकर्दमाम् || Bhagavad-Gita 2.2 Mahabharata 6.26.2. Meaning- “Hey Arjuna, what made you emotionally falter in such a testing time? Because ‘Arya’ (superior people) do not follow such path, it does not lead to heaven or fame. “Here too the word ‘Arya’ denotes virtue.It is possible to mention many more such examples. Howeverit is being restrictedfor fear of being too lengthy. It is absolutely crystal clear fact that whether it is Ramayana or Mahabharata, the word ‘Arya’ refers to virtue and definitely not to any race. Then, as the previous article showed, no matter how much Westerners manipulate the Indian dictionary for that, it would not change the basic facts.

Shri Vasudev Bidve is a scholar of the ancient history, culture, art, literature, philosophy of India – i.e. Bharatvidya or Indology from Pune, Maharashtra,

This article is re-published from Indian newspaper The Organiser