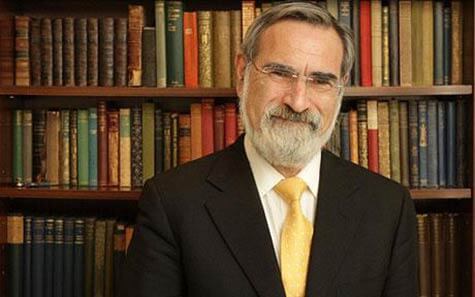 And so Moses dies, alone on a mountain with God as he had been all those years ago when, as a shepherd in Midian, he caught sight of a bush in flames and heard the call that changed his life and the moral horizons of the world.

It is a scene affecting in its simplicity. There are no crowds. There is no weeping. The sense of closeness yet distance is almost overwhelming. He sees the land from afar but has known for some time that he will never reach it. Neither his wife nor his children are there to say goodbye. They disappeared from the narrative long before. His sister Miriam and his brother Aaron, with whom he shared the burdens of leadership for so long, have predeceased him. His disciple Joshua has become his successor. Moses has become the lonely man of faith, except that with God no man, or woman, is lonely even if they are alone.

It is a profoundly sad moment, yet the obituary the Torah gives him – whether Joshua wrote it, or whether he wrote it himself at God’s behest with tears in his eyes – is unsurpassed:

Never again did there arise a prophet in Israel like Moses, whom the Lord knew face to face, in all the signs and wonders that the Lord sent him to display in the land of Egypt to Pharaoh and all his servants and all his land, and for all the mighty acts and awesome sights that Moses displayed in the sight of all Israel. (Deut. 34:10-12)

Moses rarely figures in the lists people make from time to time of the most influential people in history. He is harder to identify with than Abraham in his devotion, David in his charisma, or Isaiah in his symphonies of hope. The contrast between Abraham’s and Moses’ death could not be more pointed. Of Abraham, the Torah says, “Then Abraham breathed his last and died at a good old age, an old man and full of years; and he was gathered to his people” (Gen. 25:8). Abraham’s death was serene. Though he had been through many trials, he had lived to see the first fulfillment of the promises God had given him. He had a child, and he had acquired at least the first plot of land in Israel. In the long journey of his descendants he had taken the first step. There is a sense of closure.

By contrast, Moses’ old age is anything but serene. In the last month of his life he challenged the people with undiminished vigor and unvarnished candor. At the very moment that they were getting ready to cross the Jordan and enter the land, Moses warned them of the challenges ahead. The greatest trial, he said, would not be poverty but affluence, not slavery but freedom, not homelessness in the desert but the comfort of home. Reading these words, one is reminded of Dylan Thomas’ poem, “Do not go gentle into that good night.” There is as much passion in his words in his hundred and twentieth year as at any earlier stage of his life. This is not a man ready to retire. Until the very end he continued to challenge both the people and God.

What do we learn from the death of Moses?

[1] For each of us, even for the greatest, there is a Jordan we will not cross, a promised land we will not enter, a destination we will not reach. That is what Rabbi Tarfon meant when he said: It is not for you to complete the task, but neither are you free to desist from it. What we began, others will continue. What matters is that we undertook the journey. We did not stand still.

[2] “No man knows his burial place” (Deut. 34:6). What a contrast between Moses and the heroes of other civilizations whose burial places become monuments, shrines, places of pilgrimage. It was precisely to avoid this that the Torah insists explicitly that no one knows where Moses is buried. We believe that the greatest mistake is to worship human beings as if they were gods. We admire human beings; we do not worship them. That difference is anything but small.

[3] God alone is perfect. That is what Moses wanted people never to forget. Even the greatest human is not perfect. Moses sinned. We still do not know what his sin was – there are many opinions. But that is why God told him he would not enter the Promised Land. No human is infallible. Perfection belongs to God alone. Only when we honor this essential difference between heaven and earth can God be God and humans, human.

Nor does the Torah hide Moses’ sin. “Because you did not sanctify me …” (Num. 20:12). The Torah does not hide anyone’s sin. It is fearlessly honest about the greatest of the great. Bad things happen when we try to hide people’s sins. That is why there have been so many recent scandals in the world of religious Jews, some sexual, some financial, some of other kinds. When religious people hide the truth they do so from the highest of motives. They seek to prevent a chillul Hashem. The result, inevitably, is a greater chillul Hashem. Such sanctimoniousness, denying the shortcomings of even the greatest, leads to consequences that are ugly and evil and turn decent people away from religion. The Torah does not hide people’s sins. Neither may we.

[4] There is more than one way of living a good life. Even Moses, the greatest of men, could not lead alone. He needed the peacemaking skills of Aaron, the courage of Miriam and the support of the seventy elders. We should never ask: Why am I not as great as X? We each have something, a skill, a passion, a sensitivity, that makes, or could make, us great. The greatest mistake is trying to be someone else instead of being yourself. Do what you are best at, then surround yourself with people who are strong where you are weak.

[5] Never lose the idealism of youth. The Torah says of Moses that at the age of 120, “his eye was undimmed and his natural energy unabated” (Deut. 34:7). I used to think these were two complementary phrases until I realized that the first is the explanation of the second. Moses’ “eye was undimmed” means, he never lost the passion for justice that he had as a young man. It is there, as vigorous in Deuteronomy as it was in Exodus. We are as young as our ideals. Give way to cynicism and you rapidly age.

[6] At the burning bush, Moses said to God: “I am not a man of words. I am heavy of speech and tongue.” By the time we reach Devarim, the book named “Words,” Moses has become the most eloquent of prophets. Some are puzzled by this. They should not be. God chose one who was not a man of words, so that when he spoke, people realized that it was not he who was speaking but God who was speaking through him. What he spoke were not his words but God’s words. That is why He chose a couple who could not have children – Abraham and Sarah – to become parents of the first Jewish child. That is why he chose a people not conspicuous for their piety to become God’s witnesses to the world. The highest form of greatness is so to open ourselves to God that his blessings flow through us to the world. That is how the priests blessed the people. It was not their blessing. They were the channel of God’s blessing. The highest achievement to which we can aspire is so to open ourselves to others and to God in love that something greater than ourselves flows through us.

[7] Moses defended the people. Did he like them? Did he admire them? Was he liked by them? The Torah leaves us in no doubt as to the answers to those questions. Yet he defended them with all the passion and power at his disposal. Even when they had sinned. Even when they were ungrateful to God. Even when they made a Golden Calf. He risked his life to do so. He said to God: “And now, forgive them, and if not, blot me out of the book you have written” (Ex. 32:32). According to the Talmud God taught Moses this lesson at the very outset of his career. When Moses said about the people, “They will not believe in me,” God said, “They are the believers children of believers, and in the end it will be you who does not believe.” The leaders worthy of admiration are those who defend the people: even the non-orthodox, even the secular, even those whose orthodoxy is a different shade from theirs. The people worthy of respect are those who give respect. Those who hate will be hated, those who look down on others will be looked down on, and those who condemn will be condemned. That is a basic principle of Judaism: middah kenegged middah. The people who are great are those who help others to become great. Moses taught the Jewish people how to become great.

The greatest tribute the Torah gives Moses is to call him eved Hashem, the servant of God. That is why the Rambam writes that we can all be as great as Moses. Because we can all serve. We are as great as the causes we serve, and when we serve with true humility, a Force greater than ourselves flows through us, bringing the Divine presence into the world.

Rabbi Lord Jonathan Sacks, former chief rabbi of the British Commonwealth, is the author of many books of Jewish thought. He is a professor at YU and NYU.