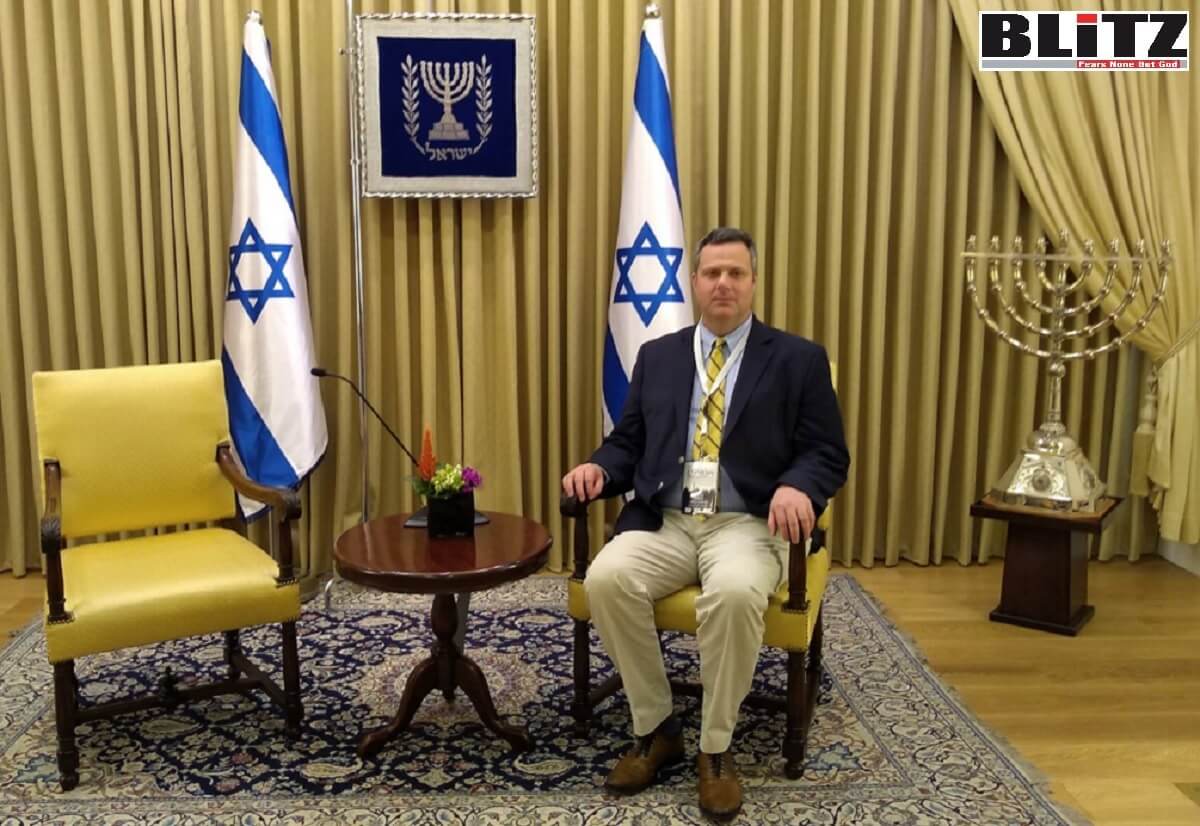 He further said, “A nuclear Islamic Republic of Iran would be a nightmare. Israel would face severe, even existential threats, as the Islamic Republic would increase its attacks on Israel through proxy groups like Hezbollah, which could easily provoke an escalatory spiral, if Iran did not already make nuclear threats. Other countries in the region like Saudi Arabia or Turkey would most certainly seek nuclear weapons in response to any Iranian proliferation. Iranian attempts to procure nuclear weapons will only unleash countermeasures such as airstrikes from an Israeli-led alliance of regional countries threatened by Iran, like the Gulf States”.

Andrew E. Harrod, a freelance researcher and writer who holds a PhD from the Fletcher School of Law and Diplomacy and a JD from George Washington University Law School. He is admitted to the Virginia State Bar. He has published hundreds of articles concerning various political and religious topics at the American Spectator, American Thinker, Algemeiner, Arutz Sheva, the Blaze, Breitbart, Blitz, Capital Research Center, Daily Caller, Detroit Jewish News, Daily Wire, FrontPage Magazine, The Organiser, Institute on Religion and Democracy, Independent Journal Review, Investigative Project on Terrorism, Israel Hayom, Jewish News Syndicate (JNS), Jihad Watch, Mercatornet, National Interest, Washington Times, and World, among others. He is a fellow with the Lawfare Project, an organization combating the misuse of human rights law against Western societies. He also is a Middle East Forum Campus Watch Fellow.

Here is the full transcript of the interview:

Shoaib Choudhury: Afghanistan is gradually returning to dark era, where Taliban leaders have recently outlawed women from attending universities, while the country is once again becoming a safe haven for jihadists and terrorists. Do you think this situation may give birth to more jihadist outfits such as Al Qaeda or let radical Islamic militancy outfits gain further strength and pose bigger threats to the region and the world?

Andrew E. Harrod: That the Taliban may revert to its pre-9/11 pattern of hosting jihadist groups like Al Qaeda is certainly a disturbing, distinct possibility. Only a firm policy, clearly announced to the Taliban, that any such hostile moves will bring repercussions from the West, such as retaliatory strikes, can deter and defeat this threat. The West will also have to consider renewing support to Afghan opposition groups fighting the Taliban, similar to the old Northern Alliance, in order to prevent the Taliban’s consolidation in Afghanistan.

Shoaib Choudhury: In your opinion, who is to be blamed for current situation in Afghanistan and why?

Andrew E. Harrod: The basic blame lies with the people of the Afghanistan-Pakistan (AfPak) region themselves, who inhabit a sharia-supremacist culture in which groups like the Taliban draw enduring natural support. Secondarily, Western policymakers must acknowledge having fundamentally mis-assessed this region with naïve beliefs that a strong, Western-aligned government could have emerged in such an illiberal society historically fragmented among various ethnic groups. Confronting jihadists in Afghanistan demanded a much more realistic strategy limited to denying the region’s use as a base for global aggression. Ultimately, President Joe Biden ineptly and precipitously administered a withdrawal, which, among other things, did not appropriately transfer military equipment to areas controlled by forces opposed to the Taliban, given an all-too predictable collapse of the Afghan National Army (ANA).

Shoaib Choudhury: In Iran, we are witnessing continuous protests by the people, while until now there is no real condemnation from the Western leaders, including the United States against the cruel mullah regime. In your opinion, what stops the Western leaders in condemning gross violations of human rights in Iran and continuous persecution of the Iranian people by Iranian regime’s Supreme Leader Ali Khamenei and his cohorts?

Andrew E. Harrod: Western policymakers like Biden are still foolishly pursuing a nuclear nonproliferation accord and overall better relations with Iran’s Islamic Republic. Correspondingly, the outbreak of mass protests in Iran against this regime negotiating partner has caught these appeasers flatfooted. The protests show that how unpopular the Islamic Republic is, and why the West should work to weaken and overthrow, and not strengthen, the Islamic Republic.

Shoaib Choudhury: What would be the fate of the countries in the Middle East and the world, if Iran finally becomes a nuclear nation?

Andrew E. Harrod: A nuclear Islamic Republic of Iran would be a nightmare. Israel would face severe, even existential threats, as the Islamic Republic would increase its attacks on Israel through proxy groups like Hezbollah, which could easily provoke an escalatory spiral, if Iran did not already make nuclear threats. Other countries in the region like Saudi Arabia or Turkey would most certainly seek nuclear weapons in response to any Iranian proliferation. Iranian attempts to procure nuclear weapons will only unleash countermeasures such as airstrikes from an Israeli-led alliance of regional countries threatened by Iran, like the Gulf States.

Shoaib Choudhury: In January 2023, GOP majority US Congress will sit in session and it is assumed that several investigations, including Hunter Biden’s laptop scandal case will be a priority alongside Biden family’s crimes and corruption. With state machinery such as the Department of Justice, Federal Bureau of Investigation etcetera already playing partisan role, do you believe such investigations will finally succeed in punishing the culprits?

Andrew E. Harrod: Investigations of Hunter Biden will ultimately not particularly interest the American people. The key question will be whether any clear evidence emerges linking President Biden to any of Hunter Biden’s business interests and whether this entails any crimes on the part of President Biden and/or disturbing entanglements with foreign states. Absent any such evidence, bureaucratic partisan-leanings of institutions like the Department of Justice will merely be one additional factor in President Biden’s favor in order to avoid fallout from Hunter Biden’s deals.

Shoaib Choudhury: Hunter Biden has been selling his so-called artwork and making millions of dollars, where Biden administration is mysteriously concealing information about the buyers. In your opinion, do you think, this is another episode of corruption of the Biden family and Hunter Biden’s selling of so-called artwork is actually an alternative way of bribery and granting of favor of Joe Biden to those buyers?

Andrew E. Harrod: This concerns have emerged, but the Biden Administration has claimed that standards remain in place to separate the president from knowing the buyers of Hunter Biden’s art and the prices offered. Again, absent any clear evidence showing a scandal, his artwork will ultimately not raise great concern, no matter how sketchy the Bidens’ defenses of their conduct might be.

Shoaib Choudhury: There is controversy centering recently held FIFA World Cup in Qatar and it is alleged that Doha had bribed FIFA officials for hosting this event, while there also is allegations of the death of hundreds of South Asian labors, who were forced to cruel hard work during construction of infrastructures for this event. Do you think, there will be genuine investigation into these allegations?

Andrew E. Harrod: I do not see how the deaths of workers in Qatar can be investigated against the will of the Qatari government, although human rights organizations can conduct their own research. Global publicity and public pressure always in such cases. Meanwhile both Qatar and FIFA will have their own interests in not exposing any scandal. Given that the claims of Qatari bribery involve officials from various African countries, not necessarily known for their financial standards, it is doubtful whether prosecutions will occur. Perhaps FIFA members will demand reforms of the organization’s operating standards?

Shoaib Choudhury: Already a number of Muslim nations have normalized relations with Israel, while there is anticipation of few more Muslim countries, including Saudi Arabia following the path. Under such circumstances, how much important is for the Jewish State to put extended emphasis on building relations with non-Arab Muslim nations, such as Bangladesh?

Andrew E. Harrod: The more the merrier! Perhaps Israel could emphasize to Bangladesh the benefits of India’s ties to Israel. Most Muslims are not Arab, so Israel will have to extend relations beyond the Arab world in order to influence the global Muslim community. Pakistan has often been a global leader in efforts against Israel, so any Israeli penetration into South Asia could also perhaps have positive effects upon Pakistan.

Shoaib Choudhury: Bangladesh is heading towards the next general elections, which is scheduled to take place in January 2024. Since 2009, a secularist government is in power in the country while radical Islamic parties such as Bangladesh Nationalist Party (BNP) and Jamaat-e-Islami (JeI) and their Islamist and even jihadist cohorts are making frantic bids of returning to power. BNP-Jamaat nexus is spending millions of dollars in Washington and London in buying support of the key policymakers, while for the past several months, it is seen that the US and Britain are clearly extending support towards Islamist BNP and Jamaat in returning to power. Western diplomats in Dhaka are openly exhibiting their undue bias against the ruling Awami League and country’s law enforcement agencies. While many of the political analysts are seeing such situation as Biden administration’s another attempt of pushing Bangladesh into the grips of radical Islamic forces and jihadists, what is your opinion on this crucial issue?

Andrew E. Harrod: I am not an expert on Bangladesh specifically, but the track record of Western politicians, particularly from the Left, in countering Islamism is not good. Too many Westerners have fallen victim to politically correct, woke indoctrination that Islam is simply a “religion of peace,” and therefore have little appreciation for nefarious sharia supremacist agendas.

Islamists, meanwhile, know Western ideals well and can exploit Western sentiments with appeals to principles such as “human rights” or “democracy.” Western diplomats, as events in Egypt in 2013 or even in Iran in 1979 showed, often also exhibit similar elite biases and naivete towards all things Islamic. There is simply little appreciation of how received Islamic orthodoxy can have totalitarian impacts.